South Carolina BBQ in the News

This article from The Times Picayune reviews the “Family Reunion: From the Low Country to the Bayou” dinner we mentioned in a previous issue organized by SC BBQ advocate Howard Conyers.

The Carolina Rib King made his way up to Pittsburgh for the Kickoff and Rib Festival and got a quick mention in this article.

Hanna Raskin, Food Editor at The Post and Courier who broke the story of Rodney Scott’s new Charleston restaurant, kept on top of the story with the release of plans for the new place:

Our September events are still a couple of weeks away. The weekend of starting Sept. 23 we have the following events, all of which are being judged by the SCBA:

Mark Miller of the The Kickin’ Pig in Lancaster passed along this shot of his location at the Carriage Inn.

“We have our own entrance or you can enter through the hotel check-in area.We have tons of space 100 seats inside the restaurant in 3 dining rooms, 80-100 seats in the outside area (which will eventually have the grass replaced with pavers and hopefully roofed), and space in our banquet room for 120 seats.”

“We have also decided to have our buffet open 7 days a week. We will always have 3-4 smoked items on the buffet in addition to a couple non-smoked meats and a variety of vegetable and other sides. remember we don’t have a freezer. We will be trying to purchase as much of our produce and meats from SC first,” Miller said.

Miller is hoping to open in the next week or so. 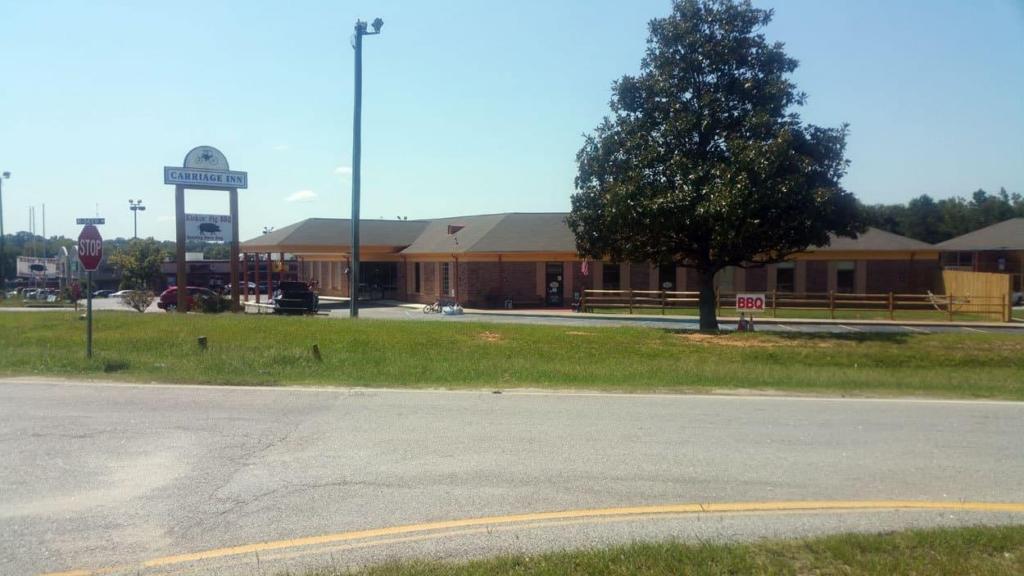 The Kickin’ Pig in Lancaster

So you think you know your SC BBQ? Try our latest quiz. It’s simple enough. We’ll show you photos of restaurants around the state to identify. Are you a Master Judge or a Novice?

As mentioned in the previous issue, we began the blog in the summer of 2012 by embarking on a “Summer BBQ Tour.”  We have never claimed to be BBQ experts, just a simple family relating its BBQ experiences, and we learned a lot that summer. Here are the simple truths of BBQ that we learned that summer.