At Roger’s Bar-B-Q House, people come for the barbecue and for more than just barbecue. Customers visit for a buffet with items that change regularly, so there is always something new to enjoy.

“We have had the business a long time and we love it. We work hard and pay attention to the details.”

When Rob Goff and his folks purchased the legendary restaurant named for the previous owner and Florence BBQ icon Roger Pope, they were confident they would continue its success.

Formerly, they’d owned Mr. B’s Seafood in nearby Lydia for years. The barbecue business was new to them, but Pope taught them all they’d need to know to maintain the menu people had come to expect.

The folks at Roger’s Bar-B-Q House cook anywhere from 20 to 40 hogs, on rotisserie cookers, depending on the season and catering functions. Because the pits actually sit outside, the outside temperature impacts the cooking times.

“After the pork is cooked, it’s actually laid out on a table so that it can cool down and be handled by hand,” he said. “Employees separate the meat from the skin, bone, and gristle.”

After the pork is pulled, it is then chopped, and a vinegar-and-pepper sauce is added.

The skins are deep-fried for homemade pork skins, served in the restaurant, and also bagged and sold there.

“They sell out fast,” Goff said.

Roger’s Bar-B-Que House also makes a type of hash that is unique to the Pee Dee region. Goff calls it liver hash gravy, and it is made with ground pork liver and seasonings.

Just 3 miles from Exit 160, (see our Interstate 95 SC BBQ Restaurant Guide), Roger’s is Florence’s premier barbeque restaurant. They consistently win the yearly awards the local papers and magazines give out after people vote.

Step up to the buffet and you’ll see why.

What Folks are Saying about Roger’s

“Roger’s has two kinds of barbeque, mustard-based and a vinegar and pepper-based,” wrote Lake High, founder of the SC BBQ Association.

“The vinegar and pepper is spicy and hot and the mustard-based is what one expects, thank goodness; that is, not too sweet.

“They even have their famous vinegar and pepper sauce bottled so you can have some for home use.

“Roger’s not only serves a very good barbeque, but they have some of the best liver hash I’ve ever had.”

“There are so many delicious options you will definitely not leave hungry. There is also a small variety of sweets for dessert, but I never have room for dessert lol.”

On Yelp, James A. wrote about all the locals he found at Roger’s Bar-B-Q House in his 5-star review:

“When I pulled up, the parking lot was packed with locals. The food was excellent authentic southern cuisine.

“Fried chicken was crispy delicious and moist. Ribs were succulent and tasty. The fried fish was again delicious crispy and moist.

“I did not try the pulled pork because I am partial to authentic southern fried chicken but everything else was delicious, fresh, and well prepared.

“In all this is a great neighborhood place definitely worth the detour off I-95, and finally it is a fantastic value. Includes a drink and dessert for the fixed price.

“Will definitely be back. You will, too, if you decide to go.”

Sure, that’s what a few people on review sites think about Roger’s, but what about the folks who really know SC BBQ? The folks who train the judges for SC BBQ competitions around the state?

The SC BBQ Association has named Roger’s Bar-B-Q House one of the Top 100 BBQ houses in the state. Here’s how their review begins:

“Roger’s is Florence’s premier barbeque restaurant. They consistently win the yearly awards the local papers and magazines give out after people vote.

Roger’s was originally started by Roger and Sheryl Pope; thus the name Roger’s. They eventually sold it. Today, Roger’s BBQ is owned and operated by Rob Goff. The Goffs also own Mr. B’s Seafood in Lydia, SC.

Yes, Roger’s caters! If you’re planning an event, Roger’s Bar-B-Que is there to help. Whether it’s a small gathering or a huge wedding, Roger’s can help. Call them at 843-667-9291 for catering menu, pricing, and any additional information.

What are the hours at Roger’s Bar-B-Que House?

Well, it depends on the day of the week. Like many SC BBQ joints, Roger’s is not open daily. They are open Wednesday through Sunday. Here are their current days and hours of operation: Wednesday 11am – 3pm, Thursday, Friday, & Saturday 11am – 9pm, Sunday 11am – 7pm. 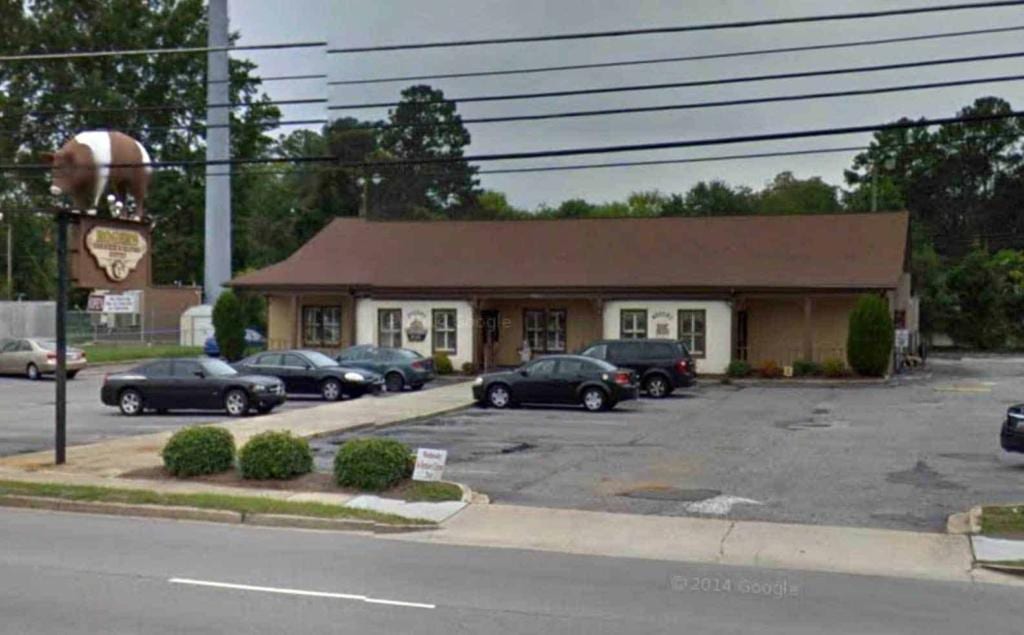