FULFORD FISH IS NOW PERMANENTLY CLOSED. If looking for BBQ in the area, check out BBQ in Charleston, SC: The Definitive Guide

Fulford Fish came on our radar a few months back when we caught a notice in the paper about its opening. They have an interesting story.

Fulford Fish is owned and run by AJ Fulford, the same person who owned and ran an auto paint and body shop in that same location for 30 years, according to a report in The Post and Courier. Fulford apparently decided to retire from the car business and open a seafood and BBQ business in that same building.

Customers have two front doors to choose from. The one on the left is for the “Takeout Kitchen.” Here you can purchase BBQ and seafood meals. The door on the right opens upon a similar sized room where patrons can purchase fresh seafood. It is an interesting and unusual mix, but one that I hope works out for Fulford and the community.

The Post and Courier reports Fulford’s is in a 3,000 square foot building that has a seating area under construction. That may well be true, but we have now visited Fulford’s twice in the last couple of months and for now, there are 4 chairs and 1 small table (and one TV) in what may be a 400 sq. ft. waiting area.

And wait you will, as in our experience, everything is cooked fresh when ordered. I applaud this approach as it appears this new business is not yet busy enough to have everything ready at a moment’s notice, so Fulford provides a hot, fresh product every time.

Our first visit to Fulford’s was back on Jan. 10, 2015, but we arrived to find that Fulford had sold out of BBQ for the day. Feeling disappointed but a bit guilty that we should order something since it was a new business, we each ordered a seafood platter. We don’t review seafood, of course, but I will briefly share some of our recollections.

The main thing we came away with from our first visit was that there was a general lack of seasoning in the food.  Heather had the fish sandwich and liked the batter on it. Camden got fried shrimp and I got fried oysters and a side of gumbo

“I had a shrimp gumbo that I enjoyed. It was good and had a spiciness to it, but it needed salt,” I later commented.  The fried oysters were moist and tasty, though their batter was under seasoned. I don’t know. In the end, all that stood out was the generally under-seasoned product.

But, again, we don’t review seafood. It is barbecue that we love. As with most of our visits, baseball was a critical ingredient.

We found ourselves at a Wando JV game in the north area on return stopped to watch Camden’s lifelong friend Declan who was playing in the corner of North Rhett and Remount Road, at Westvaco park. Well, Fulford Fish is not more than a couple of blocks away, so we set Camden loose and headed over to Fulford’s to see if we could get some BBQ this time.

Fate was on our side on our second visit to Fulford’s; he had BBQ.

I placed my order for the three plates you see below ($42) and a few canned drinks and waited. And waited. Heather decided to wait in the car, as it was warmer than the waiting area.  Again, the wait was not unexpected. As mentioned above, it looks like AJ is still cooking some of the options when ordered. There is not a basket of fries or hush puppies awaiting your arrival under a heat lamp, and I am grateful for that.

When it was ready, I took the order to go and headed back to the baseball field.

We each got a barbecue sandwich. These came with slaw and two hush puppies. Heather added french fries, Camden got mac and cheese, and I added more hush puppies. I didn’t know it came with two already or wouldn’t have ordered more.

At the park, sitting in the car behind the fence in center field, we opened the styrofoam trays and took the photos you see below.  Heather and I pulled the tops off the buns to sample the BBQ right away:

“The barbecue was crockpot barbecue. It had no flavor to it whatsoever, and was doused in sauce,” Heather remembers.

“The bread was … if we had waited ’til we got home, it would have been soggy,” I noted. “Mine was soggy,” Heather reported.

I agreed with the crockpot BBQ assessment, though I have reason to believe otherwise. In a Yelp review, the reviewer pretty much made the same claim:

Roger Y wrote, “the BBQ, while moist and tender, had no flavor.  The serving I had contained no hint of rub or smoke.  It was as if were cooked in a slow cooker.”

Later he writes, “The owner says he cooked it in a smoker using pecan wood and that some people say it has too much smoke flavor.  As I said, it confused me.  I could not pick up a trace of smoke or rub.”

I have to say we found the exact same thing. There was no rub and really no flavor other than the sauce. The meat was moist and tender, but that’s not BBQ. If indeed Mr. Fulford is smoking the meat with pecan, I wonder if the flavor is being lost after the fact.

We mentioned that this is a new place and it is all take-out at this point.  It is not busy. Maybe Fulford is smoking the pork but then refrigerating/freezing the finished product and taking out portions to keep warm in his crock pot doused in his sauce. I can’t confirm it, but if he is smoking the meat, that is the only explanation I can come up with.

“The fries were under-seasoned. They were just freezer french fries. This guy doesn’t season them; there was no salt on them,” Heather said.

“The hush puppies were fine,” I countered.  “Cornmeal fried with onion in the mix.”

“Perfectly perfect size for a bite-sized piece, but didn’t feel like they were sweet or have enough seasoning in them,” Heather returned.

Well, how about the slaw?

“The coleslaw was not a heavy mayo, but it reminded me you’d get from Sam’s wholesale in bulk. It wasn’t too sweet, or too vinegary or too ‘mayonnaisey.’ It was generic coleslaw,” Heather said.

“I would compare it KFC coleslaw but with less mayo and less sweetness. It is that fine ground everything: cabbage, carrot, onion…” I said.

“That’s why it seems commercial brand and not homemade,” Heather continued.

The BBQ sauce, however, was full of flavor.

“I liked the BBQ sauce. It was a tomato-base that had vinegar and seasoning in it,” Heather said.

“It was like they used a commercial sauce as the base, and then added vinegar and other seasonings to it. I really enjoyed it, honestly,” I said. “I dipped my hush puppies in it.”

Heather did the same with her fries.

In the end, we encourage you to give Fulford’s a chance. We’d love for them to be successful and it is early in the process for them. With that comes growing pains from which they will learn.

I believe Fulford’s is making a sincere effort, and not knowing who we were, Mr. Fulford asked us to give him sincere feedback. He wants to improve, and we believe he can.

The food was not bad, mostly just under-seasoned. Keep the BBQ fresh and boost the flavor profiles in your sides and we believe you can spend the next 30 years in the restaurant business.

Best of luck…we’ll be back. 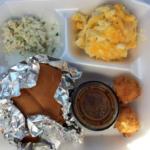 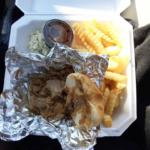 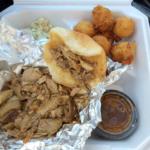 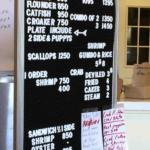 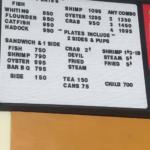 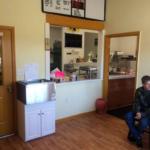 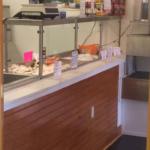 If you find yourself hurtling along I-26 on a road trip, where you would have originally found Fulford’s, consider checking out our SC BBQ Road Trip series. It will show you all of the BBQ places that you can access within 10 miles of an interstate exit in SC.

The Interstate 26 edition can be found here for the exits from Columbia to Charleston.

For the rest of I-26, check out the Landrum to Columbia edition.