Heather and I were returning from a seminar in Conway, SC, put on by the South Carolina Barbeque Association.  This was our initial orientation into the official world of judging barbeque, our first step to becoming official SCBA certified BBQ judges.

The event was fantastic and left us with a hankering to try a new BBQ restaurant on the way home.

Our first choice was Riverside BBQ in the Brown’s Ferry area of Georgetown. We arrived to find Riverside was closed.

We were quite disappointed, as the SCBA lists Riverside as 100 Mile Barbeque, BBQ worth driving 100 miles for. Such is life.

We decided to keep heading toward home, knowing that there was a place on 701 right as you come into Georgetown from the north. Big Bill’s Lowcountry BBQ was also closed, much to our chagrin. Not a soul in sight in the middle of a Saturday afternoon.

Seriously, at this point, we were wondering if some cataclysmic event had shaken the world, and we were simply the only ones unaware of the news.

(ADVICE: If using our SC BBQ Trial Locator Map, we strongly suggest calling ahead to make sure the place is open.)

So we turned on the radio to confirm earth was still as we left it and continued our mystical journey toward Charleston.

Herb and Shawn’s (now just called Herb’s) is a place Heather and I had seen on the way up but thought from the looks of things that it had gone out of business. It was, fortunately, open and all was right with the world. So we pulled in and wiped the sweat of concern from our brows.

Somewhat humorously, there was a small Weber smoker on the front sidewalk as we walked up.

Entering, we stepped into a small area. The place was empty except for one gentleman who was working in the back. There are home-printed and now sun-faded images high on the wall behind him in the area where one might look for a menu.

We were greeted with a friendly smile. He didn’t give us his name, but we asked about the sauce that was sitting in a gallon-sized, glass jar behind him. He said it is his own original recipe. It was dark and seemed to be a tomato-based sauce from where we were.

We placed our order: pulled pork plates for Heather and me, ribs plate for Camden. Each plate came with slaw and a dinner roll. Camden and I ordered baked beans and Heather ordered fries.

We waited patiently in the small strip in front of the counter that comprises the “dining area.” There are maybe three or four tables in a strip about seven feet wide that runs the width of the store.

So, while you certainly can dine in, it has more the feel of a waiting area than a dining room. “There wasn’t really any eating space inside; it was more of a waiting space,” Heather commented.

As we waited, two or three different groups of customers entered, which we took as a good sign. Before long, our order arrived, we paid and hit the road for home.

It would be an hour drive, and Heather was concerned the fries wouldn’t survive the journey, so we decided it was best to dive into them. We both agreed the fries were well seasoned and were very good.

As for the other sides, we had slaw, baked beans, and a dinner roll. None of us ate the dinner roll. Nothing wrong with it, but it was just a typical store-bought roll.

“The baked beans were good. They had peppers and onions mixed in, but they were like store-bought with the peppers and onions added in. They were really sweet and had a hickory-smoked flavor added in,” Heather said. We both enjoyed the beans.

“The coleslaw was kind of KFC-style again. Closer to KFC than Fulford’s was. It’s got that milky sort of mayo base that KFC has,” I followed.

When we say “commercial-grade” or “KFC-style” we simply mean that finely ground assortment of cabbage, carrots and whatever else might be in it, just like KFC serves. Again, there is nothing wrong with it, per se, but there was nothing special about it either. It was fine.

As for the barbecue, “the thing I remember most about eating the BBQ was that it had a heavy smoke flavor… I think I had a bit of fattiness in mine… and it was greasy. I don’t remember the greasiness so much in the taste of it, but in how much was left in the bottom of the box, but… it did sit there for an hour on the trip home,” I recalled.

“Eh…BBQ’s not supposed to be greasy,” Heather retorted. And, if you think about it, that’s true.

You don’t typically have a heavy layer of grease left when you finish most plates of pulled pork, but I’ll give them the benefit of the doubt because of the length of the ride home.

The sauce was mixed in with the pulled pork and didn’t really stand out.

“They make their own sauce, which he was proud of, but I remember us not thinking much of it,” I pointed out.

“I don’t remember it being very distinguishable,” Heather concurred.

We do appreciate Herb and Shawn’s at least being open on that mysterious Saturday and providing us another opportunity to try some new BBQ.

While we didn’t love it, they did a steady business in the time we were there and the customers sounded like regulars.

Here is a map of Herb and Shawn’s location: 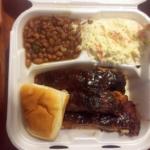 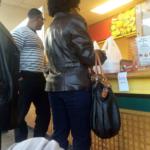 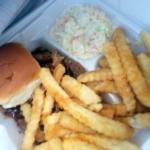 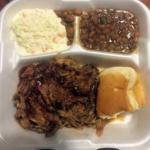 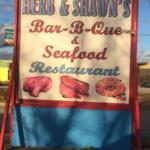 If you Love SC BBQ like we do, you might enjoy our cookbook: SC BBQ Recipes: Going Whole Hog.

Read more about the cookbook here.