Sticky Fingers is a franchise restaurant that had its humble beginnings here in Mt. Pleasant. They opened their doors in 1992 and today they have 16 locations around the Southeast.

We had the opportunity to drop in recently, a mere 23 years later.

The Wando baseball program sells a Savings Card that includes a keychain “card” for a Buy One, Get One FREE entrée from Sticky Fingers during any and every visit during the next year.

Anyway, we found Sticky Fingers where it began, nestled just off the frontage road at the foot of the beautiful Ravenel Bridge.

We entered and were seated by a friendly hostess in a booth next to the bar. The bartender would become our waitress for the evening. She was both friendly and professional. In fact, everyone we dealt with was.

Upon arrival, the food looked inviting. The pulled pork was very clean (not fatty) and was not greasy. The ribs had a nice glaze.

Unfortunately, the pleasantries ended there.

I hate to be too critical, honestly, I do, but it was simply bad BBQ.

We didn’t even bother to record our typical post-meal commentary because we were so uniformly appalled by what we just experienced. Looking back on it, the first sign that we were in for a shock was when our oldest son, Christian, said he wouldn’t bother eating there.

Now, our BBQ education began in earnest after Christian graduated and moved out, so he hasn’t had the same depth of experience that we have acquired over the last few years.  He hasn’t been with us on virtually any of our BBQ outings, I’m sorry to say.  So, for him to be so roundly critical of Sticky Fingers was surprising, but we entered our meal hopeful…and I mean that sincerely.

It wouldn’t be long until he was proven right. I knew it before I ever tasted the first rib.

As I plunged my fork between two ribs and pushed forward with the knife, the meat just gave away and the ribs pushed apart. Uh-oh. Really? Did that just happen?

Ribs, properly cooked, do not, in fact, fall off the bone, and certainly, they do not mush into the plate as you try to slice between the ribs.

In all honesty, I believe if it weren’t for what some people call “silver skin” — a membrane on the underside of a rack of ribs that cooks to the consistency of plastic if not removed — that was left on these ribs, there is no way they could have remained intact. They could never have been picked up without falling apart without it.

Biting into them confirmed what we already knew to be true: the ribs were mush. This was true on Camden’s plate as well.

Now, the pulled pork was better, but not good. It was pulled and you could find a few “ropes” in it. Heather didn’t finish her serving, nor did Camden or I.

There were four sauces to choose from: a Tennessee Whiskey, Carolina Sweet, Sweet Southern Red, and the mustard-based Carolina Classic.

They all tended to the sweet side. In fact, the first ingredient listed in the mustard sauce was liquid sugar (though checking on their website, it lists high fructose corn syrup instead).

The coleslaw is one of those overly sweet mayo slaws some people enjoy, but we tend to dislike.

Finally, the baked beans were meaty and flavorful, but not enough to save the rest.

Again, I hate to give such a negative review, but that was our experience.

Keep in mind that this is one moment in time and we cannot expect each restaurant to be perfect each time. Sticky Fingers has grown to 16 locations for a reason. Hopefully, this was just one poor experience.

NOTE: Since this review, ownership has changed hands and one of the original founders has returned to steer the ship back to its original course.  We actually enjoyed our most recent experience with Sticky Fingers and spoke with the returning founder. We encourage you to read this Q&A with Chad Walldorf to learn more and find out why this review may no longer be relevant.

Here is a map of Sticky Fingers’ Mt. Pleasant location: 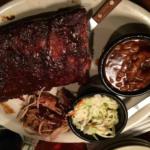 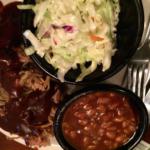 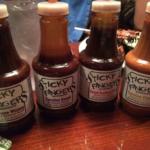 We’ve published a number of great recipes on destination-bbq,  and we’ve published even more sauce (and rub) recipes in the SCBBQ Recipes: Going Whole Hog Cookbook. If you are a fan of Sticky Fingers, check it out.

Read more about the cookbook here, and here is a listing of some of the Sticky Fingers recipes included in the book: