South Carolina blessed the world with mustard-based BBQ sauce. Antley’s Bar-B-Q in Orangeburg, the county in which mustard sauce was likely born, serves a special vintage.

But there’s more to Antley’s than the traditional sauce. In addition, Antley’s serves this sauce along with a “hot” vinegar-based BBQ sauce and a traditional tomato-based sauce.

Let’s not forget about the food

Their buffet is extensive, with a lot of praise for their fried chicken as well.

Antley’s has become a staple in Orangeburg for good barbecue and have developed a loyal following.

“We use an old family recipe,” owner Jerry Antley said. “It was handed down to us from our daddy, James. It’s because of him that we’re here now. We slow-cook our meat and put in the right seasonings to get that flavor that our customers have come to expect and love. And we have people coming in here from all over.”

In addition to the pork, Antley’s offers an extensive buffet. Walk into Antley’s and you’ll be in the buffet line.  The staff will provide you with a plate, silverware, and a glass of ice. You will find sweet tea available at each table.

Visit the buffet as much as you like, but we’ll be surprised if you can manage more than one or two plates.

The main attraction is, Antley’s pit-cooked BBQ. The pork is excellent – very tender and full of flavor, even if you decide to skip the sauce (but why would you?).

Along with the tasty menu options, Antley’s staff is something to brag about.

“Our staff has managed to create a real friendly atmosphere here,” Antley said. “We try to make people feel like they’re sitting at home at their dining tables. And we keep it clean and the food fresh so that when the 50th customer comes in, it’s just like it was when the first customer came in.”

Antley’s Bar-B-Q is less than 5 miles from Exit 145 on Interstate 26. (Check out our Road Trip series, featuring all the SC BBQ restaurants within 10 miles of an interstate exit.)

In addition to the SCBA bragging on Antley’s Bar-B-Q, regular folks really love them as well.

Sarah M. on Yelp had the following to say about Antley’s:

“My family has been coming to Antley’s since long before I was born. The quality has never wavered. Between the rice, hash, pulled pork, barbecue chicken, fried chicken, macaroni, hush puppies, baked beans, rinds, and green beans, my favorite has always been the hash. I could eat *way* too much of this food *way* too often.

“Though the price has gone up probably four dollars for adults since I was a child, $11 for all you can eat of this amazing food is still a fabulous price. Truly, the best barbecue in the world.”

“I grew up in Orangeburg and Antley’s has food to die for! I hesitate to post this review in fear that everyone will eat there and they will run out of food before I get there! Chopped pork, heavenly orange barbecue sauce, fried and barbecued chicken plus those delectable pork skins. My mouth is watering now. I drive to Orangeburg several times each year just to eat at Antley’s. If I had to choose my last meal there would be no hesitation, only Antley’s would do.”

Menu for Antley’s Bar-B-Q in Orangeburg 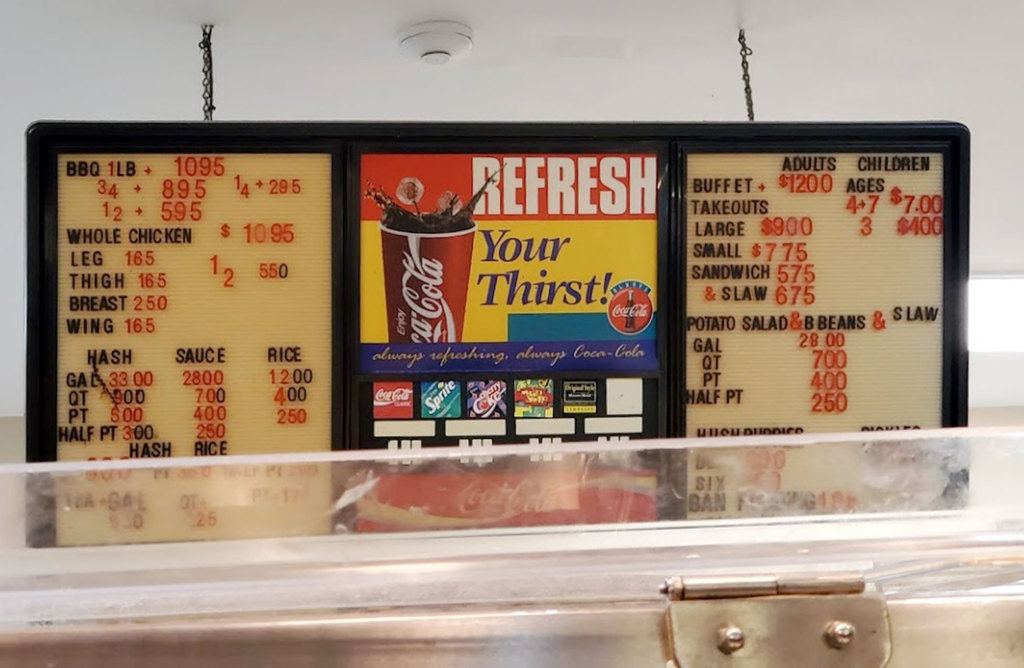 Menu for Antley’s Bar-B-Q in Orangeburg