A Taste of History

Dukes Bar-B-Que in Ridgeville was started almost 40 years ago by the current owner Scotty Thomas’ family. As always, Dukes strives to keep everything family-oriented.

When it comes to SC BBQ, Dukes is one of the great family names. There are a number of Dukes restaurants scattered throughout the Lowcountry of South Carolina.

Dukes, however, is not a chain and while all are loosely connected by family ties, they’re all separate and unique restaurants.

This article by Robert Moss sheds some light on the Dukes BBQ business and its history, going back to the original Earl Dukes of Orangeburg.

Dukes Bar-B-Que in Ridgeville stands out among the nearly one dozen locations bearing the name around the lower part of South Carolina. While it shares a lot in common with its sister restaurants, there’s just something special about the Ridgeville store.

Certainly a large part of the reason is that Dukes is so popular is simply because of the food. This is real food not fast food.

The Dukes Bar-B-Que in Ridgeville is famous for great food and an amazing buffet.  Again, like many of its sister restaurants, this Dukes offers an extensive selection.

Pulled pork is, of course, the staple. Pulled from hams cooked over for hours over their pits and picked clean for serving.

In addition, you’ll also find chicken and some of the best hash you’ll ever enjoy.

For the uninitiated, South Carolina barbecue hash is a staple in BBQ joints around the state. It is something that native Sandlappers simply expect to be served at a barbecue restaurant.

In fact, there used to be “Hash Houses” that dotted the state. There are few remaining today. If you’d like to make your own at home, try this SC BBQ hash recipe from Dukes in Orangeburg.

While admittedly not the most photogenic food in the world, hash sure does taste good.

Among other things, sides include mac & cheese, hush puppies, baked beans, and slaw.

In the end, whether you choose to dine from the buffet or settle for a plate or even a sandwich, Dukes Bar-B-Que in Ridgeville will have something to satisfy everyone in your party.

What Folks are Saying about Dukes Bar-B-Que in Ridgeville

Among the many Google Reviews, Google Local Guide Mike Diamond, author of  over 200 reviews, find Dukes Bar-B-Que in Ridgeville is so tasty it will put you in a coma:

It’s a hole in the wall place, but they are consistently good.

Buffet of pulled pork nicely pulled and chopped; fried chicken is good, too. Hash and rice is one of my favorites.

Lots of good country vegetables. The corn nuggets are unique and tasty.

Blueberry cobbler, bread pudding, and banana pudding were a sweet treat, too. Hard to beat the price.

Definitely good enough to put you into a food coma.

Over on Yelp, Brad P has enjoyed Dukes Bar-B-Que in Ridgeville for decades:

Dang, I love this place. I’ve been going here for around 30 years and it’s the one I long for while stranded up in Yankee territory.

This is no-frills dining. Bring a big appetite to fill up those styrofoam plates with that impressive spread.

Some of the standouts here are, in no particular order: the hash, the chicken, the corn nuggets, the hush puppies, and the banana pudding.

And there’s a surprising amount of vegetables to go along. You don’t see rutabagas on many BBQ buffets, but they rock it here.

But the star in my opinion is the mild barbecue sauce.

My best guess is that the base is a combination of mayonnaise and mustard, but I’m not sure. It’s a bit creamy and on the thicker side–you won’t find sauces like this outside the Lowcountry.

I would definitely buy it by the bottle if they sold it.

Menu for Dukes Bar-B-Que in Ridgeville 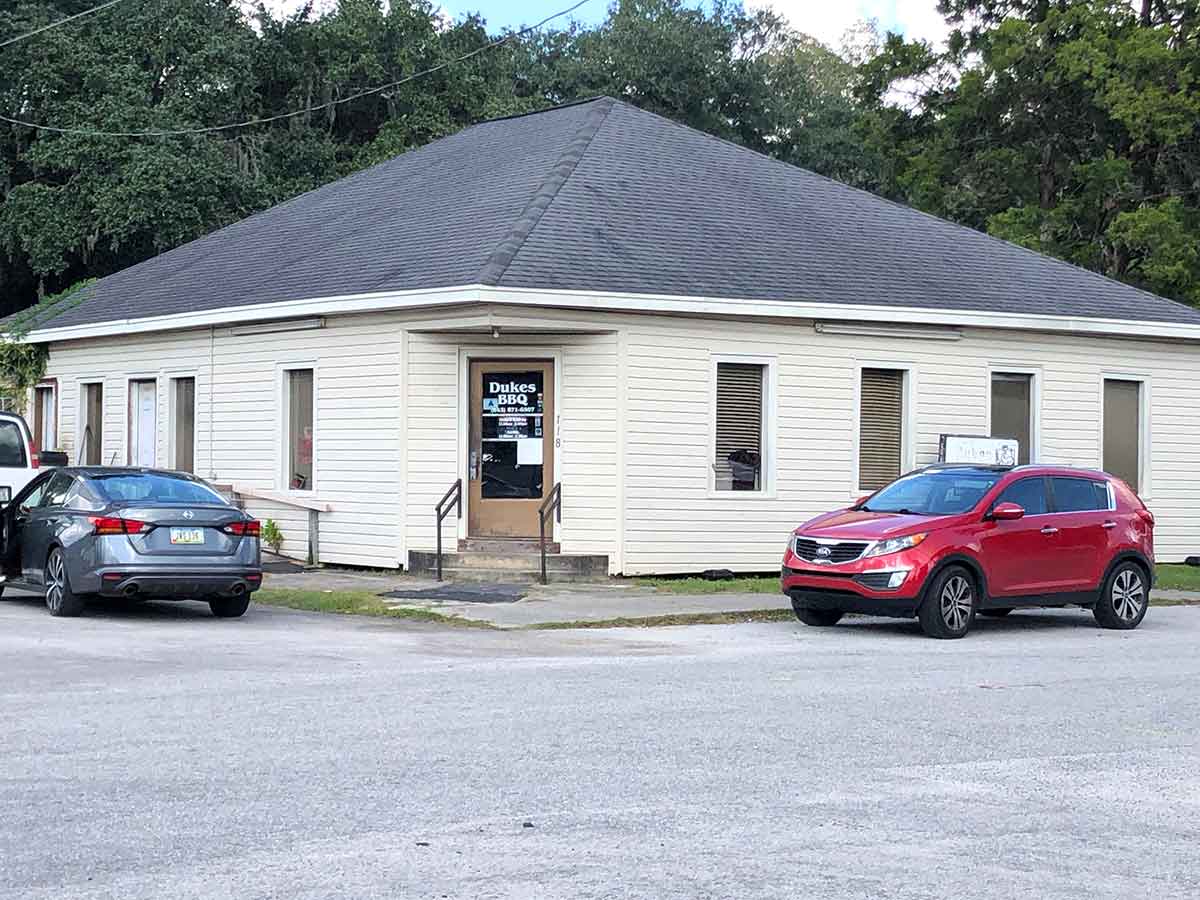