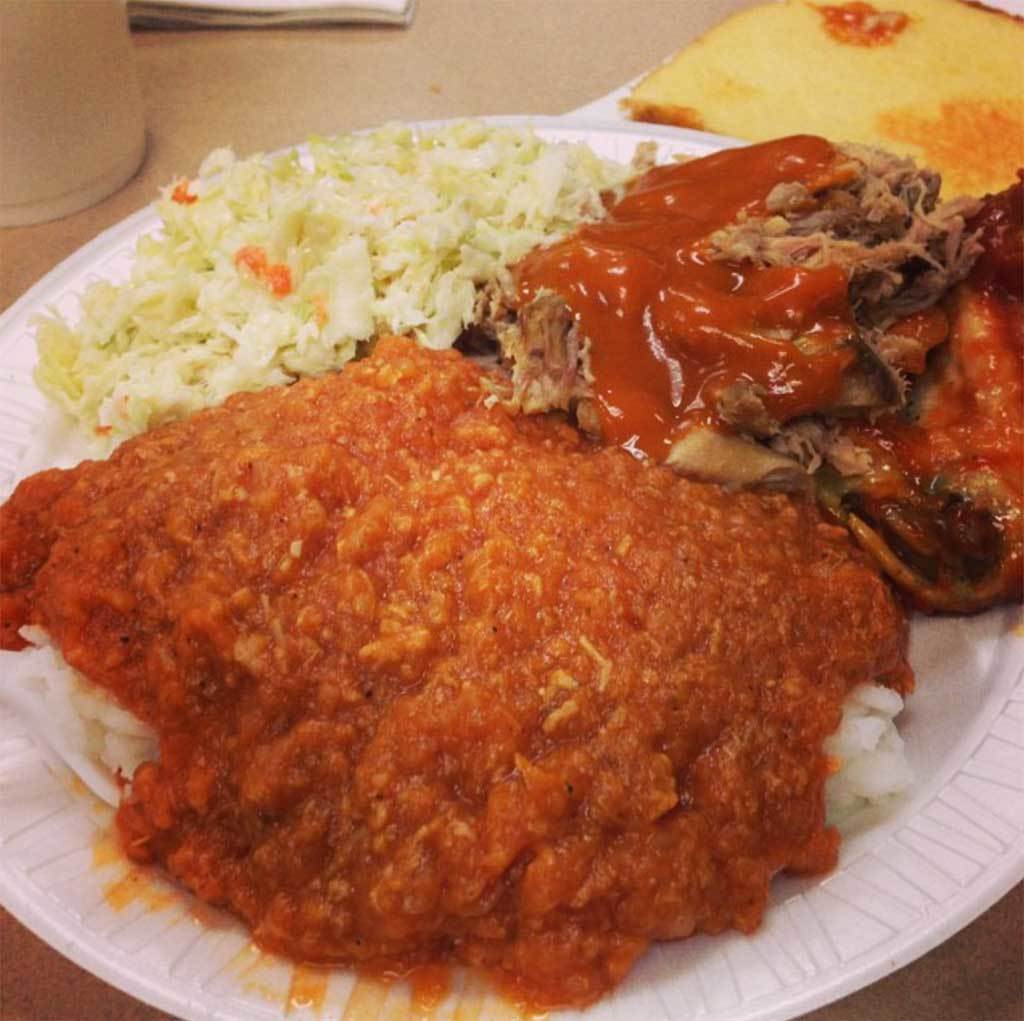 If you know South Carolina BBQ, you know the name Dukes. And if you know Dukes, you have certainly heard about Dukes BBQ hash. If you add one SC barbecue hash and rice recipe to your arsenal, this Dukes BBQ style hash recipe is one to add to the family cookbook.

There are a dozen Dukes restaurants in SC at the time of this writing, but while they share similar qualities, they are not all the same. Walk into Dukes of Walterboro and you will not get the exact same menu or experience as you would at the Dukes in Ridgeville.

They are not a chain or franchise, per se, but rather a loosely connected assortment of family restaurants.

One thing they all have in common is a delicacy unique to South Carolina: hash and rice. This is not to be confused with Brunswick Stew, common in BBQ restaurants in NC and GA.

South Carolina barbecue hash recipes all yield a thick stew of sorts whose exact ingredients vary from family to family and restaurant to restaurant. However, common among all the variations of SC BBQ hash recipes, you’ll always find its base built upon a meat product — typically pork, sometimes beef, and often a combination.

This rich, meaty foundation is layered with some combination of onions, potatoes, and BBQ sauce. Then it is all boiled down (and sometimes ground) into a thick, soupy stew.

While that may not sound delicious to the uninitiated, most native South Carolinians expect a side of hash and rice when they go out to eat barbecue. Dukes’ BBQ hash recipe is one that has kept them coming back for over five decades.

Here’s an old clip from SCETV discussing the Dukes BBQ hash recipe at the Dukes on Whitman in Orangeburg. Do they use these unusual parts from the pig to make their hash?

Below you will find our Dukes BBQ hash recipe we received from Michael Ott, who originally grew up in Orangeburg County, the heart of Dukes BBQ country, and has family ties to Dukes BBQ. It is not Dukes’s actual recipe. “It’s good, but not a match for Dukes,” he said humbly.

Hash and rice is a staple at BBQ joints around the state and if you’re looking for a homemade recipe, Michael’s recipe is friendly for the home cook.

In each piece, we examine the origins and history of yet another SC BBQ original. In addition, you will find a current listing of every SCBBQ restaurant that serves hash.

For your convenience, we’ve included an interactive SC BBQ Hash Map which is similar to our SC BBQ Trail Map. This map filters the result to show only those places serving some version of an SC barbecue hash recipe, regardless of meat base, flavoring, or style.

How do you find the best hash and rice spot near you?

With your permission, the map will find your location and show you the closest 25 places serving hash within 100 miles of you.

And, of course, you’ll find several SC BBQ hash recipes to make at home. Among them, you will discover a beef hash recipe that certainly a different style than Dukes’ and more commonly found in the Upstate.

But be sure to come back to make and enjoy this Dukes BBQ hash recipe from Michael.

For a different yet still authentic SC-style hash, substitute half the pork with a beef roast. That version of this South Carolina BBQ hash recipe will have more in common with the hash you find in the Midlands of SC.

Can be refrigerated for up to 5 days or frozen for up to 6 months.

Have family living in Cope SC. (Proctor's). Grew up eating Dukes BBQ.We knew Danny Duke quite well. Think he started with 2 places , Cope and Branchville. He would serve one night in Cope and the next in Branchville. Friday then Saturday..We would travel 40 miles (from Williston) to eat there and visit with him..When he saw me walk in (as a kid) he would always laugh and say "Well i'm going to loose money tonight) !! LOL He was "The Best" !!!!

Haha...great story. Thanks for sharing!

Married a South Carolinian who turned me onto this over 40 years ago... Made this tonight for dinner... too good for a side dish... it was the main course. I’ve had bbq pork hash at Piggie Park and plenty of other places in South Carolina ... I love it and one time I tried to make it myself with a few notes and my imagination...lt came out kinda ok.... but this time I used this recipe and WOW what a difference. Now I read a few other recipes and I know for a fact that Piggies uses a bell pepper.... so I added one red and one green bell pepper and also a scoop of brown sugar.... and only 3 1/2pounds of pork. Gotta say, best thing I ever ate, better than any I had in any restaurant ... and being out in California... It’s impossible to get.

Bruce, thanks for sharing. You're right, hash has simply not spilled out of our borders. It is hard enough to find in GA or NC, much less in CA. I am pleased you enjoyed the recipe and modified it to make your own. Hash deserves to be considered a main dish. Enjoy!

I am making this today! My family was from Ridgeville, so their hash is basically a food group to me. I can't tell you how excited I am to have a bit of home cooking in my house!

Love it...let us know how it turned out.

I grew up in Beaufort SC and used to eat Dukes BBQ all the time. I made this the other day and it is just like I remembered! Thanks for sharing.

Thanks for sharing, Kirk! Glad to hear it brought back some good memories. Michael Ott, as you probably read, shared that one with us along with a couple of others. He has a close connection to the Dukes BBQ legacy, but his recipes are his own. In the cookbook, we published Ott’s version and the “actual” Dukes BBQ sauce recipe given to us by a Friend of a former employee. Ott’s version is also published on the website. Thanks again for sharing.

Delicious! My husband misses Carolina BBQ hash from our days living in nearby Aiken, SC. This will do nicely until we get back there for a visit.