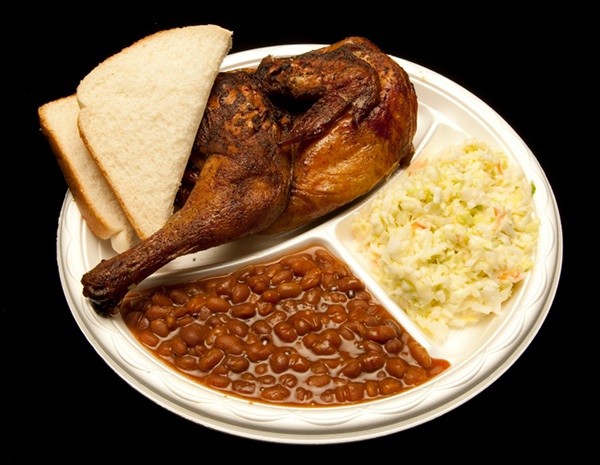 Buzzard Gizzards are the Secret

It’s long been rumored that buzzard gizzards are the secret ingredient in the baked beans at Bucky’s BBQ in Greenville. In fact, owner Wayne Preston tells folks that is the unique spice that provides the special flavor he gets in his baked bean recipe.

We have looked long and hard for a source of buzzard gizzards, but I guess you have to buy them from some underground market. Knowing he couldn’t share his source, we were grateful that Preston would at least share the other ingredients in his baked beans recipe.

See Preston discuss the use of buzzard gizzards in this recipe:

Gizzards aside, this baked beans recipe from Bucky’s BBQ is, fortunately, a simple dish for the home cook to make. Preston starts with pre-cooked beans from a large can (55 oz) of Pork and Beans.

Sure you can make your own from scratch, but frankly starting from dried beans is hardly worth the effort. What you add to those beans is where the magic happens.

Here’s what Preston had to say about the recipe:

“There are a hundred ways to make baked beans. Everybody’s grandmother has a different recipe.

“You can make them cheap or expensive, depending on how complex you want to get. This is a fairly simple yet very tasty recipe that I enjoy making for catering and groups that want a meaty bean that satisfies most anyone.”

What Folks are Saying about Bucky’s Baked Beans Recipe

It certainly seems to satisfy his customers. In fact, check out what some folks had to say about Bucky’s baked beans recipe on the review sites:

First, Michele D on Yelp wrote the following: “The baked beans were delicious; don’t know if they make them themselves or if they are out of a can, but they were great.”  Funny, I know…

Also on Yelp, both Priya M and her husband tried this baked beans recipe and it was a hit: “My husband loved the mac and cheese and we both loved the sweet baked beans. This definitely hit the spot.”

Over on TripAdvisor, 1969TomT came pretty close to guessing one of the ingredients. “The other plate was ordered with sides of baked beans and slaw which were also very tasty, especially the beans cooked with a touch of cinnamon.” Cinnamon….allspice. Not bad, Tom.

Depending on how long you cook them, or if you choose to first drain off a bit of the liquid from the canned beans, Bucky’s baked beans recipe can provide you with a looser or thicker finish, as you can see in the Instagram post below.

However you decide to make your version of this baked beans recipe, we’re certain that you’ll enjoy it.

Let us know how yours came out by rating the recipe and/or commenting below.

If you prefer to cook in a smoker, you will have to cook longer to be sure everything is well done and that the smoke flavor is infused completely.

If you prefer to cook peppers, onions, bacon, and sausage before making the beans, you can cut the cooking time in half.

Check out these other authentic SCBBQ recipes we’ve published on the site:

In addition, we’ve published all of the following recipes in the SCBBQ Recipes: Going Whole Hog cookbook  (read more about that here):