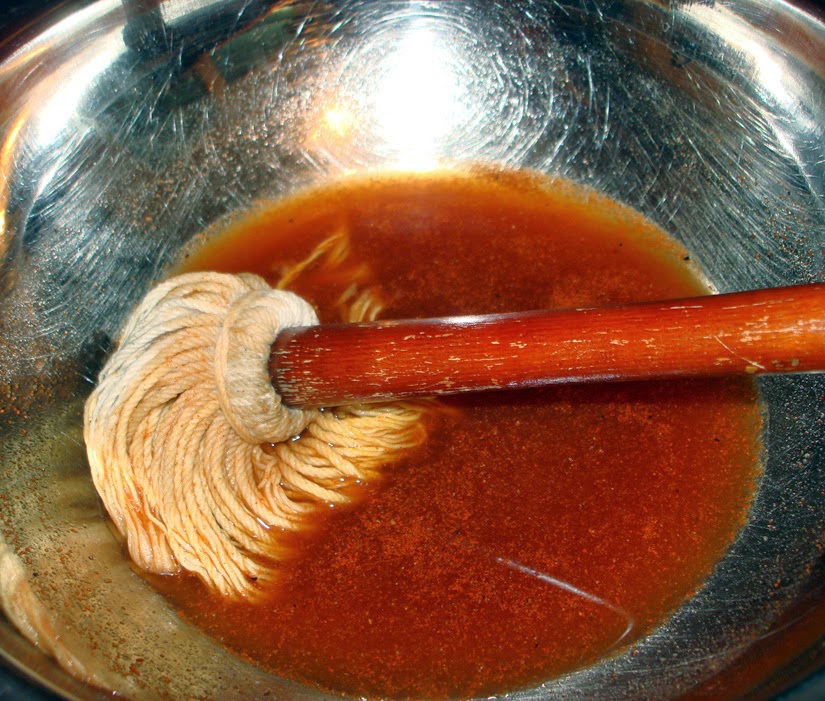 What is a mop sauce?

A mop sauce is a thin vinegar-based barbecue sauce that is spiced with salt and black and/or red pepper. This sauce is used to baste meat on the grill and on a larger scale, to provide flavor and moisture at the end of cooking a whole hog, as is the tradition in South Carolina.

Watch as James Beard-award winning pitmaster, South Carolina’s own Rodney Scott — originally of Scott’s BBQ in Hemingway and now at Rodney Scott’s BBQ in Charleston — literally mopping sauce onto a whole hog (and steak!) in this video:

What is in Rodney Scott’s barbecue sauce?

Just watch and you’ll see Rodney share the ingredients in his famous mop sauce: “Black pepper, red pepper, vinegar, and…..” We’ll let you listen in to find out the secret ingredient! (Skip ahead to 2:19 if you’re impatient.)

Recently, he was seen on national tv, making an appearance on the Today Show.

Through this visit, the secret was revealed, and now we officially have Rodney Scott’s mop sauce recipe and Rodney Scott’s rib rub recipe, provided by the pitmaster himself.

If you make all of that, you’ll have all the ingredients ready to make Rodney Scott’s BBQ Ribs Recipe.

How is a mop sauce used?

In most applications, you simply baste your choice of meats periodically during the cook.

But won’t your ribs become soggy?

Using a mop will not make your ribs soggy. In fact, the sauce will actually attract smoke to the meat, giving them smokier flavor in less time.

And, if you’re grilling the ribs low and slow, as you should be, a mop will help keep the ribs from drying out.

This anonymous submission is actually the second recipe submitted to our site. It is primarily used to mop ribs but works in any standard application.

“The mop sauce at once both slightly cool and flavor the meat, and because the sauce is so thin, it penetrates to flavor deeply,” our contributor noted.

We’re not sure if “Dad” is the person who submitted the recipe or, maybe, that person’s father? Regardless, we pass it on to you.

I prefer to make this the day before cooking at the same time I season my ribs and allow it to cool overnight to room temperature. Baste ribs every hour during cooking.

If you enjoyed this recipe, check out these other authentic SCBBQ recipes we’ve published on destination-bbq:

You can read more about that here.