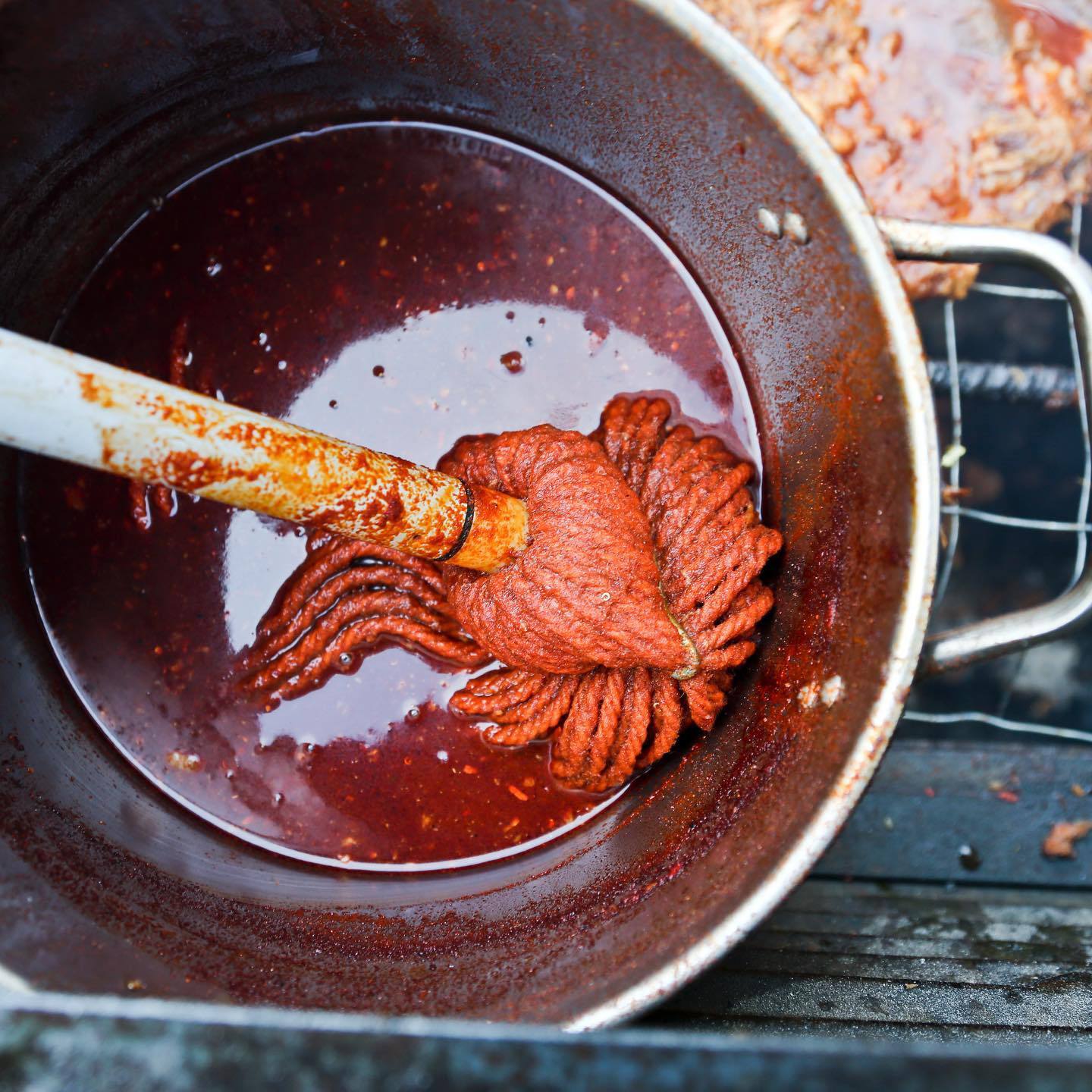 The long-kept secret is out! Here is Rodney Scott’s BBQ sauce recipe direct from famed SC BBQ pitmaster Rodney Scott himself. This is the mop sauce that he seasons the hog with on the turn and puts in bottles on the table.

Rodney Scott’s BBQ sauce recipe has long been a secret, but in a recent appearance on the Today Show, Scott shared the recipe for “Rodney’s Sauce,” the magic elixir that helped make him a James Beard award winner.

Rodney Scott was born in Philadelphia in 1971. Just a year later, his parents, Rosie and Ella Scott, moved with their only child to rural South Carolina.

They settled near Nesmith, where Ella’s father owned land, and the Scott family became farmers. They grew tobacco and other crops while also raising some hogs.

Beyond that, much of their diet depended on what they grew or raised themselves: sweet corn, cucumbers, butter beans, okra, and more. The meat that graced their table they slaughtered and cleaned for themselves.

On special occasions throughout the year, the family would cook a whole hog which they seasoned with their special homemade mop sauce recipe.

In addition to what they raised, there was one other thing that helped sustain the Scott family. Scott’s Variety Store was a simple, old country store where they sold gas and other goods. Eventually, they started cooking hogs on the side to make a little extra money.

They opened the store in Hemingway in 1972 having no idea it would be the fertile ground they built an empire upon once Scott’s Bar-B-Que took off.

Young Rodney grew up around those pits and cooked his first hog at the tender age of 11, all by himself. He learned from watching his father and uncle over the years.

Within the next 30 years, Scott would become an icon, being written about in the New York Times in 2009, Time Magazine in 2011, and the Washington Post the following year.

There’s a reason the national media took notice: whole hog barbecue and Rodney Scott’s BBQ sauce recipe helped propel him to stardom. In fact, in 2018 Scott was named Best Chef Southeast by the James Beard Foundation, arguably one of the highest awards in culinary circles.

Prior to winning the award, Scott left Hemingway to start his own venture in a new place, Rodney Scott’s BBQ in Charleston. In part, it was because of the influence of good friend Nick Pihakis, founder of the Alabama BBQ chain Jim and Nick’s.

Rodney and Nick are kindred spirits. Like Rodney, Nick was born in Pennsylvania, moved south, and ended up working in a father-and-son restaurant that they built into a regional brand. But Nick had a bit of a lead. Jim and Nick’s had grown to more than 40 locations in seven states.

It wasn’t long before Scott would leave Hemingway, partnering with Pihakis to start Rodney Scott’s BBQ. That was July 2016. Today, they have locations in Charleston and Birmingham, AL, with an Atlanta restaurant in the works. Despite the success, leaving must have been difficult.

“Oh, it wasn’t as hard as you think,” Rodney said in this story when asked about leaving his hometown and the family business where he had worked fulltime for nearly 30 years. “It was a pretty easy decision after a few situations, circumstances.”

In a Washington Post story, Tim Carman told the story of Rodney’s decision:

“Those close to Scott, who spoke on the condition of anonymity because of their friendship with the pitmaster, say that father and son no longer talk. It’s a classic case of son transcending father, one person says, and the jealousies that come with it.”

“Roosevelt Scott could not be reached for comment and wasn’t at Scott’s in Hemingway on the day I visited. (Ella Scott, incidentally, says her husband is supportive of their son.)”

“’T.D. Jakes told a story that not everybody you encounter on your journey is meant to be with you when you get to your destination,’ Rodney said. ‘Sometimes your journey is to go past that person. That person may be your brother, sister, mother, father, uncle, whomever. . . . My life is just like that.’”

Rodney Scott’s BBQ sauce recipe is one of the pillars upon which Scott built his legacy. Rodney’s mop sauce is a vinegar and pepper sauce.

This type of sauce dominates the Pee Dee region of South Carolina, even extending into North Carolina, where some form of vinegar-based barbecue sauce drenches the entire state.

Rodney mentions that he uses all the ingredients listed in the Rodney Scott’s BBQ sauce recipe below. But, if you’re paying attention, you’ll note he adds a disclaimer onto the end. “…some sugar, and some other stuff,” he says. “Couple little secrets in between there….”

Check out this episode:

When it comes down to it, a vinegar-based mop sauce is comprised primarily of vinegar, salt, and various peppers including black, cayenne, crushed red.

From there it can diverge, but the purists stop right there. Others add sweeteners like sugar or molasses. Ketchup is a controversial addition to the mix. And then there are some outliers.

“’Don’t be afraid to go a little citrusy in your mop sauce,’ Scott said in a Garden & Gun interview. ‘Lemons help break down any toughness in the meat,’ he says. Just strain the lemons out before you bottle the sauce or use it.”

You’ll note that Rodney Scott’s BBQ sauce recipe as written below sticks to the baseline of the basic vinegar sauce recipe. However, looking at the photo above, we can all agree that the restaurant recipe might contain a little more.

“The three must-grab spices that you should have in your cabinet are cayenne, paprika, and dark chile powder,” Scott says. Those add head and nuance. Additionally, black pepper gives bite, and pepper flakes build both heat and flavor.”

You’ll note that paprika and dark chili powder are absent from the recipe he provided to the Today Show, but he’s pretty clear they should be some of the first ingredients you grab from your spice rack when making a mop sauce.

Is That the Whole Story?

It is also obvious in photos that his sauce is rich and deeply red. That is not going to be what you get using the Today Show recipe. So we have added a few notes to the recipe.

In his defense, Rodney Scott’s BBQ sauce recipe as provided to the Today Show is intended for use on ribs, so maybe, just maybe, that is his actual rib sauce recipe, but we have our doubts.

(By the way, check out Rodney Scott’s BBQ ribs recipe.)

In fact, we have long been confident Scott also uses Accent (MSG) as one of the ingredients in his mop sauce recipe, but there has never been any official confirmation.

That said, he did note on the Today Show that MSG is a product he uses. “It may be a controversial ingredient,” Scott wrote, “but I unapologetically use MSG in my seasoning rub. It is a flavor maker!”

In fact, given what he says in the Garden & Gun article, we’re pretty sure the Today Show recipe is not the whole story.

“One last tip for a backyard barbecue,” Scott said. “Make sure you’ve got lots of alcohol and great music—and tell plenty of lies.”

Whatever the case, Rodney Scott’s BBQ sauce recipe is one we’re sure you’re going to enjoy.

Rodney Scott’s Cookbook, World of BBQ: Every Day Is a Good Day

While he has not shared many recipes over the years, here is one you might enjoy making in the meantime. Rodney shared this recipe for the collard greens from Rodney Scott’s BBQ.

And while you’re at it, you might as well throw together Scott’s “potent” rib rub recipe. We mention the sauce and rub in this Web Story on Rodney Scott’s BBQ Ribs recipe.

This is the recipe as provided to the Today Show by Rodney Scott; however, based on comments he's made in other interviews, we've found that adding the following ingredients will get you a bit closer to the original. Our suggestions are estimates: