Hash is a South Carolina original, a dish so unique to SC — which is arguably also the birthplace of barbecue — that if you’re from virtually any other part of the country you probably have an entirely different dish in mind.

No, we’re not talking corned beef hash or some sort of breakfast concoction. We’re talking about a dish that harkens back almost to the origins of barbecue itself.

Patrick Phillips of Big “O” Que shared with us his BBQ hash recipe, and we’ll let him explain a bit more about hash:

SC BBQ Hash…what is it?

Hash over rice is the popular style of any South Carolina hash recipe search you will find on the internet, but our Upstate South Carolina style is almost like finding Bigfoot.

Our Upstate style of hash is very different from what you will find anywhere else in the state. Our recipe contains only a small amount of pork, if any, and is eaten as a main dish with white loaf bread or on a bun with coleslaw or just with a good slather of Dukes mayonnaise.

It’s nothing like what the name sounds. It’s not breakfast hash and nothing like corned beef hash. It’s a vast mixture of animal parts, mainly pork, with BBQ sauce, potatoes, onions, and spices in recipes from Columbia to the coast and on down.

Upstate recipes contain strictly beef and sometimes a small amount of pork, with lots of onions, spices, and lots of butter.

Nonetheless, no matter where you are in South Carolina, there are many styles and preferences.

It’s anywhere from a soupy mush to stringy beef that will melt in your mouth. Funny thing is you can travel thirty miles North of Gaffney, SC,  to the state North Carolina and most folks there will have no idea what hash is in any form.

South Carolina has always had hash from the colonial times to the present day. As a child, we looked forward to the 4th of July, as that was a big time for hash.

Every volunteer fire dept. and old-time cook presented their style of hash. These men spent all night surrounding this South Carolina delight cooking in large 40-100 gallon size cast iron pots stirring the meat with paddles or ax handles all night.

My hash recipe is handed down from my father. It’s the same, unchanged concoction he and his good friend Fire Fighter/Chief Charles Petty came up with back in the early ’60s, long before I was born.

My father owned a local restaurant in Gaffney, SC, called the Joy Drive-In, and he served this hash recipe only on the 4th of July because also located in Gaffney was Bill Willard’s place “Willard’s Hash & BBQ.”

He was also a very close friend and my father was the type of man who did not want to infringe on another man’s livelihood. Bill was famous for his hash, and it was served every day in his hash and BBQ restaurant.

My father was famous for foot-long hotdogs and burgers. He also sold BBQ at his hotdog stand that was prepared by his friend Bill Willard.

Hash is no longer just a holiday meal, but served every day all over our Great State of South Carolina!

— Download the SC BBQ Trail map and find restaurants serving all the types of hash we enjoy in SC or use our SCBBQ Restaurant Field Guide to all the SCBBQ restaurants within 10 miles of an interstate exit. —

This recipe is the style and flavor of hash you will find in Cherokee County. The same hash you would have found at Willard’s or the Joy Drive-In; both are now closed and just memories, pieces of the past that will live through this small-batch recipe that I hope you try and enjoy.

I failed to mention my father’s name in the story above: he was the late Rep. Olin R. Phillips.

After turning the restaurant over to his nephew and focusing on politics, he spent 30 plus years in the South Carolina House of Representatives.

The photo below is of my father and Bill Willard.

My father is being served a plate of Willard’s famous hash. (Today, you might try Midway BBQ in Buffalo, SC, to get a taste of what Willard’s hash was like.)

My father’s nickname was Big O, so I named my BBQ catering business after him. 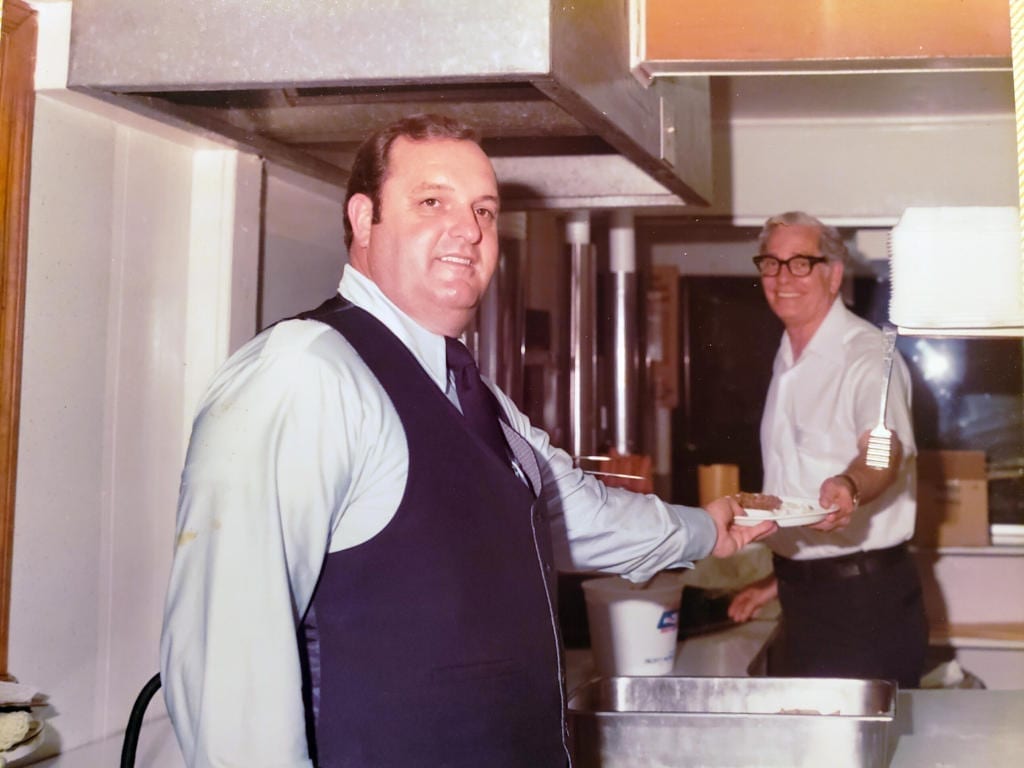 The second photo is a packed house inside Willard’s Hash & BBQ, showing how popular it was locally.

We’ve published an in-depth look at SC BBQ hash. In this piece, we examine the origins and history of yet another SC BBQ original. In addition, you will find a current listing of every SCBBQ restaurant that serves hash.

In the meantime, you have to make this classic Upstate South Carolina barbecue hash:

Check out these other SCBBQ Hash recipes we’ve published on destination-bbq:

And we’ve published the following hash recipes in the SCBBQ Recipes: Going Whole Hog cookbook  (read more about that here):

Great article. I'm a Gaffney native, and I have a question. What was that red, sweet, sauce Willard's served with it's hash plates?

@Elaine Black, I'm sorry I never had the pleasure of enjoying a meal at Willard's and I don't know about the red sauce. I searched back through old copies of the Gaffney Ledger, but no luck finding any mention of the sauce. Hopefully, someone will see your question and let us know. I am aware of The Jiggy Pig and Jeff. I'm sure he'd be flattered by the comparison. Thanks for sharing.

Also, I the old Joy drive in building is a drive in restaurant called the Jiggy Pig, and Jeff Finely has the closest to Willard's hash I have ever tasted.

I spent years in Winnsboro SC and my parents rented a home from Jim Hill who owned the he C&C grocery on hwy 321 a few miles south of town. I helped Mr Hill tend to the cattle he raised and once or twice a summer he’d make beef hash. I loved that and the recipe above seems close as I can remember. That was over 40 years ago. Later I moved to Summerville and spent time at my late sisters house on Lake Marion right outside of Eutawville and we ate at Sweatman’s most weekends. So I’ve had the opportunity to both basic types of SC hash. I’ve never made beef hash before but I’m definitely going to try the recipe. Carl Lovitt

@Carl “Battery box” Lovitt, that is a life well lived. Not many get to enjoy a variety of hash types like you have. Let me know how it turns out for you!

I made this the first time for July 4th. We were amazed at how much it tastes like Midway’s hash! Making it again today for Labor Day! Thank you so much for sharing the recipe!!

Thanks for sharing! All the credit goes to Patrick Phillips and his dad.

I see your family was from Gaffney. So was the majority of my dads family. My grandparents lived on college drive near the elementary school. We are the Smith/Farish family.

The most appropriate way is to get it to the proper consistency by reducing down or adding water.