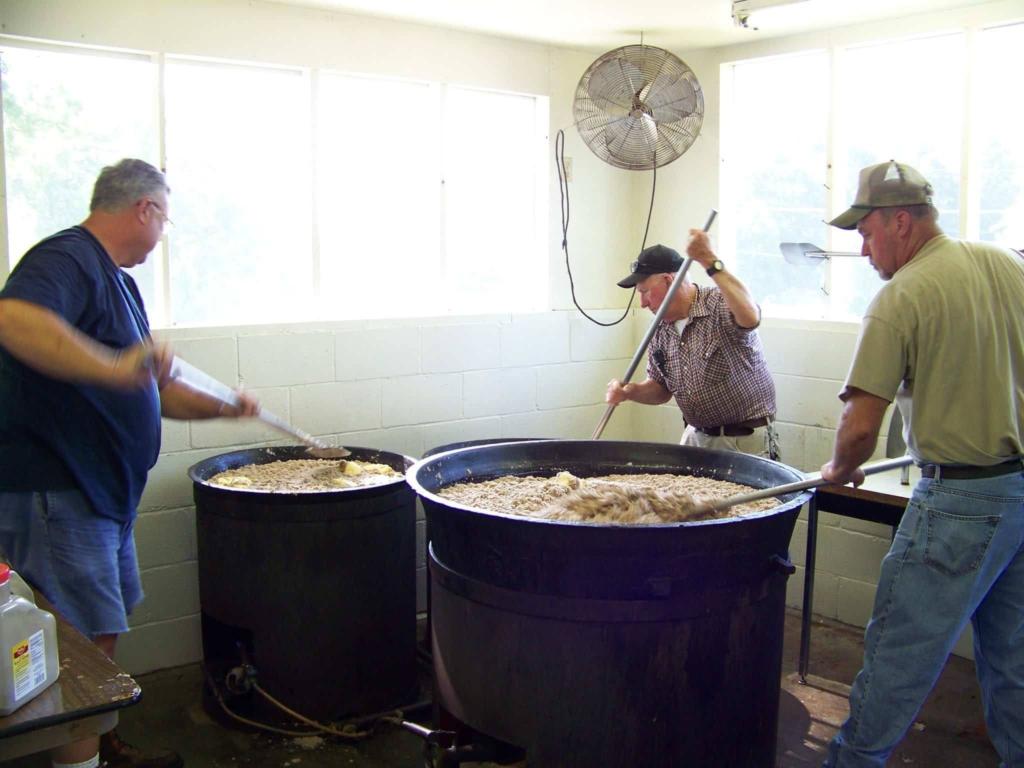 Family recipes for SC BBQ hash are treasured. That is especially true in the Aull family.

I spend more time than I should on the tigerillustrated.com message board, where I occasionally have an opportunity to discuss SCBBQ.

A poster who goes by the handle Tigerridge shared his family’s hash recipe with the board, and I asked permission to publish it here. He was gracious enough to allow us to do so.

“I’m not entirely sure the origin of the recipe,” he said,  ‘but it’s been at the Aull family Thanksgiving BBQ in Pomaria for at least 60 years. My aunt gave me the recipe.”

BBQ, as you know, associates itself well with many holidays. The 4th of July, Memorial Day, and Labor Day all jump to mind….but Thanksgiving, not so much.

“My family has been attending Thanksgiving reunions since the thirties. It was always held at a home/farm in Pomaria, SC,” Tigerridge explained.

“The initial events were only a Thursday Thanksgiving dinner, but the family was dominated by seven brothers and a cousin who loved to hunt. They would all spend the night, and get up early Friday morning after Thanksgiving and hunt rabbits, squirrels, dove, and whatever else they came across,” he said.

“They would come back from the woods with their catch, and throw it on a huge BBQ pit loaded with oak and pecan wood that they would light before setting out to hunt.

“Hence, the Friday BBQ was started… “

“Hmm….interesting,” I thought, but what about the hash?

“The traditional Friday foods were smoked rabbit and chicken, and later, pork butts and hot dogs,” he continued. “The cousin (my uncle) also raised and butchered two hogs a year, and one of the by-products of that was the hash.”

“Potato chips also dominated the Friday festivities. The women would wash and slice the potatoes, and the men would fill a large cast-iron kettle with lard, build a fire underneath, and fry the potato chips… They rarely made into the house for the dinner, lol…”

Man, that’s a great Thanksgiving feast if I’ve ever heard of one….and a great family tradition.

And while it is a traditional meal, that doesn’t mean it must always be cooked exactly as written.

When sharing the hash recipe, “I always add the disclaimer that the ingredients can be adjusted slightly for tang and/or consistency.”

If you hit the road in search of SCBBQ restaurants, you will find hash in most of them…and use our online SC BBQ Trail Locator map or download the official SC BBQ Trail map when you do.

But if you prefer to make your South Carolina BBQ hash at home, here ladies and gentlemen is the Aull family hash recipe as enjoyed in Pomaria for generations:

Check out these other SCBBQ Hash recipes we’ve published on destination-bbq:

And we’ve published the following hash recipes in the SCBBQ Recipes: Going Whole Hog cookbook  (read more about that here):

Don’t know much about SC BBQ hash, check out this primer.