South Carolina: The Birthplace of Barbeque

It may surprise you to learn that South Carolina is, arguably, the birthplace of BBQ.

Surely as old a practice as cooking over wood is, we cannot claim that a relatively new place like little ol’ South Carolina could possibly have been the genesis of barbeque as we know it today?

I had my doubts, too, but reading Lake High’s book A History of South Carolina Barbeque has me convinced. 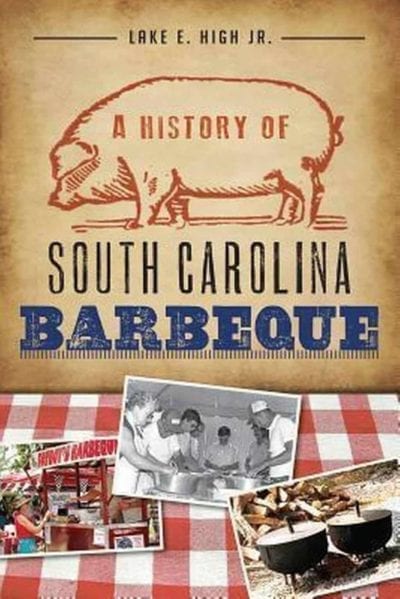 High, the president and founder of the South Carolina Barbeque Association, has written cogently on this very topic in the first couple of chapters of his book. He not only examines many of the “Myths, Tales, and Misconceptions” about the origin of barbeque, he also delves into the history of this New World to pinpoint the only logical location where BBQ could have first been pulled off a pit.

That place clearly is South Carolina.

You see, to understand the origin of BBQ, you must first accept and understand exactly what barbeque is.

First and foremost, “barbeque is pork cooked over very low, indirect heat for a very long time,” High writes. “It also has to be kissed by the airborne marinade of smoke. No smoke, no barbeque.”

So there you have it. All the elements of BBQ: pork slow cooked with smoke and heat from a wood fire.

A quick tangent before we get into the facts that prove South Carolina was the birthplace of barbeque.

First, barbeque is a noun, not a verb (at least not in its common misuse). It is not the thing on which hamburgers are cooked; that is a grill and you don’t barbecue hamburgers – you grill them.

Also, barbecue is not simply smoked meat. Smoked meat is not the same as barbeque. The difference lies in the temperature and cooking time.

When making barbecue, the temperature is higher than in smoking and the cooking time is shorter. So you have grilling, smoking, and “barbecuing,” and these are all different things.

Now, back to the origins of barbeque:

In order to have BBQ, you have to have two things: pork and the slow cooking technique which yields barbeque.

Well, pigs are the only source of pork and the slow and low cooking technique was a tradition of those native to the new world.  It wasn’t until these two joined together that barbeque was even possible.

“Barbeque — real barbeque — is the gift of two civilizations. It was the Indians’ way of cooking meats slowly so as to make tough meats tender combined with the pig that the Spanish introduced into the Western Hemisphere,” High writes in his book.

So, how and where did these two defining elements of barbeque first join?

There are many theories.

One suggests it was first-born in a Chinese house fire. High quotes Jackie Hite, former pit master at Hite’s in Batesburg-Leesville (now closed), as saying, “I was told that once there was a Chinaman who kept his pigs in the house, and one day the house burned down and the pigs were trapped inside — and that was how barbeque was born.”

Another suggests that pirates spread the concept of barbeque which they learned from the Caribbean Indians. That sounds sort of plausible, but then High points out, “Well…there were plenty of pirates in New England and New York, not to mention England, France, and Spain, but there was no barbeque in those places, so it just isn’t true that barbeque followed the pirates.”

Well, that actually suggests that the people native to the Caribbean Islands were the true progenitors of barbeque, but that is not the case, either. Historically, the people of these islands would not have had large game available to cook. Their diet would have matched their available resources. therefore, a cooking technique to slowly cook and tenderize large animals would never have been needed and wouldn’t have naturally evolved on these islands. Thus, barbeque could not have originated in the Caribbean.

A fourth misconception is that BBQ was born in NC. North Carolina may have been “First in Flight,” as they are understandably proud to profess, but they were simply not first in BBQ.

One theory holds that NC was the birthplace of BBQ because it was supposedly home to the first barbeque restaurant. Well, that may be true, but that doesn’t mean that barbeque was necessarily invented there.

“When the subject comes up at various seminars, I always ask the members of the audience to hold up their hands if they think that waffles were invented in Atlanta, Georgia, in 1955. No hand has ever gone up. That is because waffles predate 1955 by generations and were being eaten in Europe before Atlanta was even a train terminal, much less a town. But the first waffle restaurant was, indeed, opened in Atlanta in 1955,” High points out.

The other NC origin theory is a popular television myth: Spanish explorers brought the practice to NC, where it thrived. There is just one little problem with this notion: the Spanish never really went into North Carolina. High details the history of the times pointing out that by the mid-1500s the English had not yet settled into NC and that when they did in 1585, it “didn’t go well, as the name the Lost Colony of Roanoke suggests.” Shortly after, the English and Spanish signed a written treaty and each more or less kept to their own areas with the English then establishing Jamestown in VA in 1607 and the Spanish sticking to the La Florida region that comprised what we know now as Florida, Georgia, and South Carolina.

“Since almost everybody, educated or not, recognizes that the Spanish and the Indians were the co-inventors of barbeque, then North Carolina is absolutely ruled out as its birthplace, as no Spanish were there, except a those visiting the western part of the state — and they were hurrying along to get what they were really looking for,” (gold and silver) High explains.

“So, despite the TV myth of North Carolina being the home of barbeque, it just isn’t true.”

While there are other myths High disproves in A History of South Carolina Barbeque, we will move on to the real question at hand:

How do we know that South Carolina was, in fact, the birthplace of barbecue?

Well, we now know that to have barbeque, we must have intermixed the pig with the practice of cooking whole animals far enough away from the flames so as to “barbeque” the meat with heat and smoke.

High goes into great depths about the French and Spanish explorers detailing their history along the area of “La Florida.” Notably, High focuses on a former French settlement south of Charleston, near Beaufort, called Fort Caroline that the Spanish later renamed Saint Elena when they took over the abandoned location. The Spanish moved into the area in 1566 and remained there for a generation before withdrawing back to Saint Augustine.

It was during this time when the Native Americans and Spanish at Saint Elena were intermingling that barbeque was, in fact, born. The coastal tribes in SC, as documented in Jacques de le Moyne’s drawings, cooked whole animals over green stick frames. 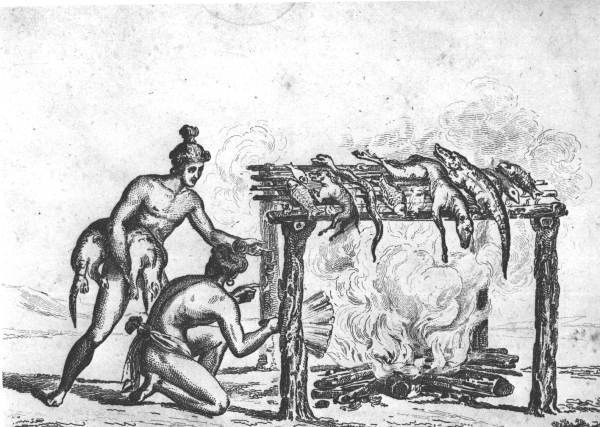 Le Moyne was, however, with the French and not the Spanish who arrived later. That is why he did not depict a pig in the scene.

“For years, the natives and the Spanish shared their culture and their foods, including the pig. With the Indians’ knowledge of barbequing and the Spaniards’ knowledge of raising the food source, barbeque became the way the Indians and Spanish, at least at first, cemented their friendship and cultural exchange,” High notes.

So with the pig introduced to the coastal Indian tribes in the Saint Elena region of what we now know as South Carolina, the first barbecue. With many of the other origin myths dispelled and a clear case drawn for the marriage of the Native American cooking technique and the Spanish introduction of the pig, it is fairly certain that the first real barbeque took place here in South Carolina.

Note: Lake High’s explanation is much more in-depth than this quick overview of his findings.

For a more complete look at the research, I encourage you to check out his book. It is available from Amazon. In addition to covering the origins of BBQ, High delves into the history of BBQ from the early days in South Carolina to modern-day barbeque.

He also discusses sauces and even provides some recipes typical of those found in South Carolina. 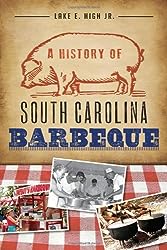 Show your Pride: SC is the birthplace of barbeque.

This is the mission and message of the SC Barbeque Association and of destination-bbq.com as well. We have created the design below and have tee-shirts, stickers and more available with our design on our new CafePress Store. 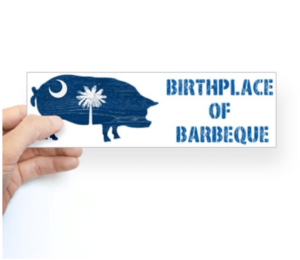 Take a Trip on the SC BBQ Trail

Given SC’s long and storied history when it comes to BBQ, the SC Dept. of Tourism established the SC BBQ Trail complete with a print map which you can download here.

While that map is a great (and great-looking) resource, it simply is not as up-to-date or as comprehensive as our interactive SC BBQ Trail Locator Map.

Before you start your engines, you might consider reviewing our series SC BBQ Road Trip: A Restaurant Field Guide for each of the interstates that traverse our state.

The I-95 Corridor  (Get the ebook version)

I-26: The Final Exits (Columbia – Charleston)

While Mr. High does provide a couple of recipes in his book, we invite you to check out the recipes we have published on this site. If you like those, we have compiled over 150 pages of recipes, history, and stories in the SCBBQ Recipes: Going Whole Hog cookbook. Learn more about our cookbook in this post showing every recipe.

SCBBQ Road Trip: The I-95 Corridor