At Henry’s Smokehouse, we’ve used the best ingredients, the leanest butt in town. Our BBQ is cooked in the old-fashioned Southern tradition. We place top choice meats in open BBQ pits with hickory logs and cook them to perfection at low temperatures. Henry’s cooks its pork butts for 12 hours and its ribs for over 8 hours.

If you have ever had meat cooked long and slow and experienced the fall-off-the-bone tenderness and the distinctive hickory flavor, you begin to understand, why Henry’s Barbeque is becoming legendary.

We use the old fashion style of low and slow. Cooking almost 1000 lbs of meat per day, we use select butts, cooked over a low fire for nearly 14 hours. We then hand pull all our BBQ removing excess fat and gristle and hand chop it. Ready to serve a delicious, tender, and moist product. Automation seen in other restaurants may be faster, but at Henry’s, we believe in the traditional hand-pulled and selective style.

Our ribs are select St Louis cut ribs, slow-smoked for nearly 6 hours, seasoned, and served to perfection using our own dry rub recipe. Chicken is a boneless, skinless, breast. Trimmed to our standards and slow-smoked to maintain maximum moistness.

We serve brisket as a special on Fridays and Saturdays.

Seasoned with our own special brisket rub, we then slow-smoke our brisket for 12 hours. You have to get there early for this one it sells out every time.

Our barbeque is served with a choice of sauces on the side: Henry’s tomato-based mild BBQ sauce and a mustard-based spicy sauce. So, check our menu for BBQ and pork ribs, pull up a chair, roll up your sleeves, and dig into the best Southern BBQ in South Carolina… Henry’s Smokehouse!

What Folks are Saying about Henry’s Smokehouse on Wade Hampton

Among the many Google Reviews, Local Guide Florence PS needed a pick-me-up and found it at

Have been passing by this gem of a place for quite some time now and finally was able to stop in today–OMG, best ribs, delicious coleslaw, and yummy sweet potato casserole. And the two sauces they gave me to try since it was my first time, I don’t know which one I liked better, mustard which had an intense peppery, vinegary taste, yum, or the red more tame sweeter (and was that a hint of vinegar) flavor. I couldn’t tell which one I liked better.

So many choices for next time, so little room for it all. I’d like to try their banana pudding, too!

Plus, I needed some smiling faces after being at the doctor’s downtown. Not only did they oblige but made me feel welcome–a rarity nowadays. I’ll definitely be going back after my next doctor’s visit

Thank you, Henry’s Smokehouse for the GREAT grub and the warm reception. Feels good to be appreciated.

Over on Yelp, Chris S had a lot to say about his experience with Henry Smokehouse on Wade Hampton:

Wonderful smoky chopped pork!  We came in on a Saturday around 3:30 pm so the place was only half full and we had no trouble getting the table we wanted. Walking in the place smelled smoky and inviting. There was no line so we quickly reviewed the menu and place our order, which was delivered in about 5 minutes. Off to a great start.

My wife ordered the pork and chicken with a side of coleslaw. Slaw was fine but the chicken was the biggest surprise of the day. It was so moist and had a nice smoky flavor, best I’ve ever had from a barbecue place.

I ordered the pork and fries with hash and rice. I’ve read about SC hash and wanted to try it, and it was interesting, kind of like the pork tossed with what tasted like curry or something. OK, but that’s not why I came to Henry’s. I’m here for the pulled pork!

They call it chopped rather than pulled, but it had a desirable stringiness to it so call it what you will. I call it delicious! Pork butt meat was smoky, juicy, and flavorful enough to stand on its own. I ate the first half of my serving without any sauce at all and it was fine, really wonderful. Then I tried the sauces.

I started with the mild Piedmont sauce and at first, found it uninspiring. After trying the other sauces I came back to it and found it pretty remarkable and bought a bottle to take home. The hot Piedmont was just ok and reminded me of other red pepper sauces, so I didn’t eat much of that. The other sauce I really wanted to find in this part of the country was the mustard-based sauce, and that was surprisingly delicious wrapped into the pork. I have to learn how to make this now as my wife wants to try it on brats and other porky foods at home. We bought a bottle just in case.

All in all, this was exactly what I was hoping to find in our barbecue quest of western South Carolina. Best pulled pork I’ve ever had.

The SC BBQ Association has deemed Henry’s BBQ to be 100-Mile BBQ, BBQ worth driving 100 miles for. Here’s how they began their review:

The first time I tasted Henry’s barbeque was at a catering.  I thought if they can deliver barbeque that tastes that good I’ve got to find the source.  And the source was, then, on Wade Hampton Boulevard in a small restaurant that had been some other eatery in its youth.  But the barbeque tasted the same as when I first tasted it, which means it was very good.

See the other Henry’s Smokehouse locations: 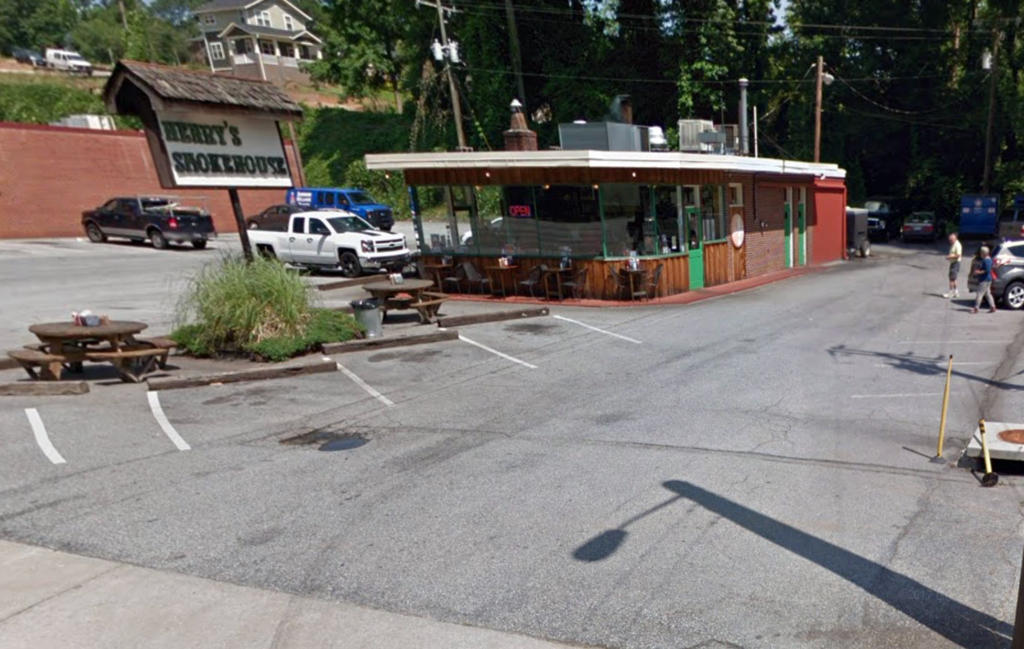