Learning How to Judge BBQ 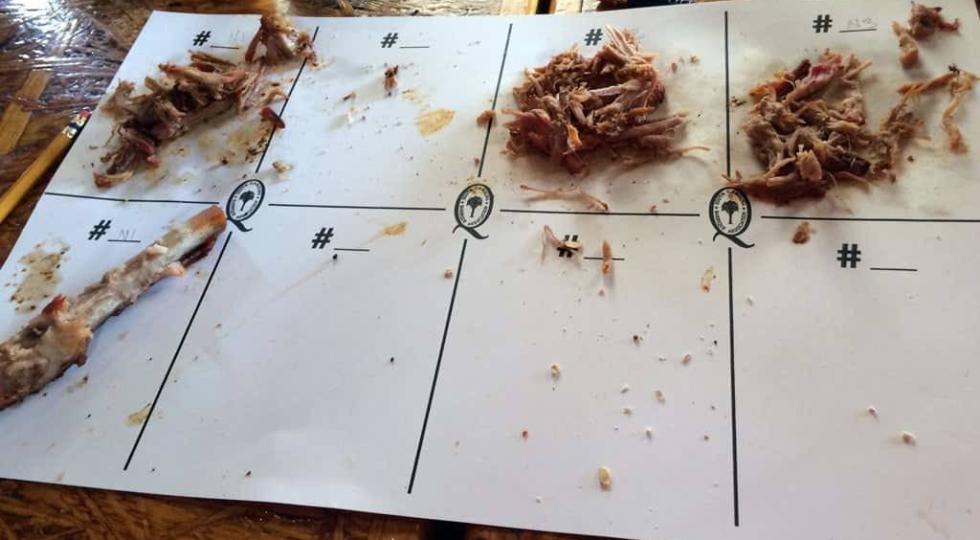 Did you ever want to learn to the proper way to judge BBQ? Yea, we did, too.

Three years after starting a blog whose primary focus is reviewing barbecue restaurants seems to be an odd time to learn how to judge barbecue. If you remember our “How You Can Regularly Eat SC’s Best BBQ for FREE” post, we discussed that Heather and I had begun the process of becoming certified SCBA barbecue judges.

Today, we took our next step in that process, as it was our first baseball-free weekend since the Judges Seminar in Conway.

Before we go any further with today’s experience, here’s what you need to know:

The SCBA is simply better than any other BBQ association around because it stands alone in taking judging BBQ seriously.

I could be wrong, but I don’t think any other organization requires so much of its judges prior to sitting at an official judge’s table for the first time.  Judging anything is a skill to be learned, and the SCBA assures the cooks who cook in these competitions that their BBQ boxes will only be evaluated by a group of well-trained judges.

Consider this: before any judge officially weighs in on any BBQ box, he will have done the following:

1) Attended a half-day (4 hours or so) seminar where he learned the basics of scoring systems, some history of South Carolina barbecue, some of the background of the SCBA, and other clerical sorts of things.

2) Sat at a “Novice Table” at FOUR (4) different BBQ competitions. At this table, novice judges sit with a Master Judge (must be a different Master Judge each time), and this is the point at which the real learning begins. Master judges lead each table, instructing novices on the everything from the simple how-to’s of filling out the SCBA judging sheet to the nuances of scoring each category on the judging sheet: Appearance, Aroma, Tenderness/Texture, Taste, and Overall Impression.

Did I mention that you do this FOUR times at FOUR different competitions before you ever get to sit at a table where your scores will help determine a winner?

Compare that system to the famous Kansas City Barbeque Society (KCBS) which proclaims on its website:

“To become a CBJ [Certified BBQ Judge], just attend one of the hundreds of classes conducted by KCBS every year throughout the country. In a half day’s time, you’ll learn how to grade world-class chicken, pulled pork, ribs, and brisket – and taste them during the process! By the time you’re finished, you’ll be ready to sign up for the next competition in your area!”

Really? So in just a half day, I’m going to be an expert in judging 4 entirely different dishes? Impressive or pure BS?

I don’t know about you, but if I were a cook competing in a competition, I would appreciate that my hard work was being evaluated by people who have had SCBA’s level of training.

So what was it like our first time at the Novice Table?

Interesting and educational, no doubt.

Our table was lead by Master Judge Greg Gladney. Greg is a charter member of the SCBA and is both passionate and knowledgable about BBQ, the SCBA, and scoring. Teaching novices like Heather and me is now one of his primary roles with the SCBA. We were glad to have Greg as our first instructor.

First, he made it clear that judging is something that comes naturally to all of us. It is what we do, from selecting which french fry to eat from among the pile to determining which BBQ restaurants are worth going back to or bragging to your friends about. We evaluate each time we eat; we know inherently what is good and what is not, we just need to use that skill we’ve been developing our entire lives.

It was a good way to begin and made us more comfortable from the start.

What helped considerably is knowing what is average.  You can compare “average” to about 80% in school, Greg explained. Eighty percent is average work, right?

Well, knowing that BBQ you consider average should earn 80% of the total for a given category, you simply do the math. If a category is worth 5 points and you think it is average BBQ, it should then earn 80% of 5, which is 4 points.

This establishes your baseline for judging. Average = 80%

Side note: When we first took our seats, we were joined by Bill Hahn, another novice judge and master chef who would earn his apron that day (become certified). He had calculated the “Judges’ Average” for each category (that is all the judges’ scores combined and averaged out), and we took this initially to be our baseline for scoring.

However, when Greg later joined us, he clarified that the judge’s actual score averages were higher than the SCBA’s baseline of 80% and that we should actually work from the 80% figure as average and not the current SCBA scoring average.

I know that sounds confusing.

To clarify, we have determined that in a category worth 5 points that average should be 4, right?

Well, the actual judge’s average scores for Taste (a 5 point category), is 4.3. This is higher than the standard set by the 80% rule, right?

So, if we were to recenter our baseline to 4.3 as average BBQ, then the whole scoring system would shift toward higher scores.

That’s probably still confusing, but I hope it makes some sense. Just know that average BBQ should score at the 80th percentile. (And, by the way, apparently this is a point of contention among the SCBA elite, with some favoring the higher judges’ averages being used as the baseline.)

Anyway, back to the story…

After getting us oriented, explaining the scoring average, and showing us how to hide your score sheets during judging, we began to sample BBQ.

We would be judging butts and ribs. The first 3 would be butts and the final box (yea…we only got one…) would be ribs.

Our first box was hefty. There was a clear mass to the box as you bounced it in your hands. Greg pointed out that he likes that in a box.

Opening the box, I found three sections: pulled pork topped with “burnt ends,” the “money meat” in the center, and a third section that I honestly don’t recall as I am writing this. I think it was more “chunks” of BBQ. Apologies…

The better boxes mirror this with the three sections mentioned above.

As for the appearance and aroma, the meat was glazed with a light, red sauce, and the color was dark. To me, it was a nice looking box. The aroma, however, reminded me of Kraft BBQ sauce. Later, in the car, Heather said the exact same thing. Great minds…

We placed samples in the rectangle on our mats, and we ate with our fingers. This, in part, was to examine the texture.

Greg showed us how to find a “rope” or strand of BBQ meat and pull gently on the meat. You can read the texture from the way the strand responds.

Does it resist?  Does it resist too much? Does it fall right apart? You are looking for slight resistance and a clean break of the fibers.

Next, Greg balled up a piece and examined its reaction.

Did it uncoil? Did it just sit there? If it just sits there, it is probably overdone.

He then pushes the meat into the roof of his mouth and interprets the reaction with his palate. Does it dissolve into mush? If so, it is overdone.

We mimicked him as he taught…and while I thought squishing the ball of BBQ into the roof of my mouth was a little strange, I understood its purpose.

From there, we discussed the nuances of the offering in Box “N1” and wrote down, compared and discussed our scores. This is very helpful to novice scorers such as Heather and me. True learning takes place at the novice table.

We repeated the process with the second box.

This box was very different. There were no sections of BBQ, no money muscle, only pulled pork sitting in a styrofoam tray.  This box also lacked the heft found in the first. The aroma was not as good, either (possibly due to the lack of burnt ends, which provide stronger, smoky aroma).

Bill asked, “Did you taste Tabasco?”

He was right, there was clearly Tabasco either in the sauce or possibly in an injection used in the meat. Nothing wrong with that, just interesting how it jumped out when he mentioned it.

Again, we scored, compared and discussed and moved on to the third box.

As soon as he opened it, Greg let out hearty laughter that echoed throughout the bar. If you are a cooker, this is not what you are going for.

The cook team had “marked” the box by including fruit in the box. You can not do this. The box was disqualified (as was the box that went to the actual judging table), but since we were there to learn, we judged it anyway.

Heather, who I proclaim to have a great palate, recognized the fruit as spiced peaches right away. She was right. Frankly, the BBQ was not bad, not great, but not bad, either. Would have been interesting to see how they did without the disqualification.

Side note: I said the SCBA is the best of the BBQ organizations. They don’t disqualify boxes for some of the stupid things other groups do. In fact, each team has a chance to be reviewed at the Turn-in Table. If there are issues, the box is not disqualified and the cook teams have a chance to fix the box and resubmit, as long as they turn it in on time. This team chose not to have the box reviewed and ended up being disqualified.

Finally, we got to review ribs. The box was interesting. The ribs were inconsistent in their cuts…also in their quality. I suspect they knew it was a novice box and gave us the poorer choice of ribs, saving the highest quality cuts for the box that would actually be judged. Greg seemed to disagree with this notion, but it makes sense to me.

The rib I had was fantastic, honestly. It was a perfect rib. Perfect ribs, contrary to popular opinion, do not “fall off the bone.” Perfect ribs will show your bite mark and the bone will appear dry, Greg explained. That’s exactly how mine was.

Interesting side note: There are different ways to cut ribs:

Apologies. I’m sure that’s hard to visualize but cut 3 is the “judges cut” as it gives a center bone surrounded by all the meat on either side of that bone. In essence, it takes 3 ribs to make one “judge’s cut.”

As for the other ribs in the box, not so good. In fact, Bill’s was a poor rib cut with more gristle than actual rib bone.

The most accurate word to describe the box was inconsistent, both in cut and quality.

So, such was our experience at our first novice table. It was a great learning experience, and we look forward to our second session.

How You Can Regularly Eat SC’s Best BBQ for FREE