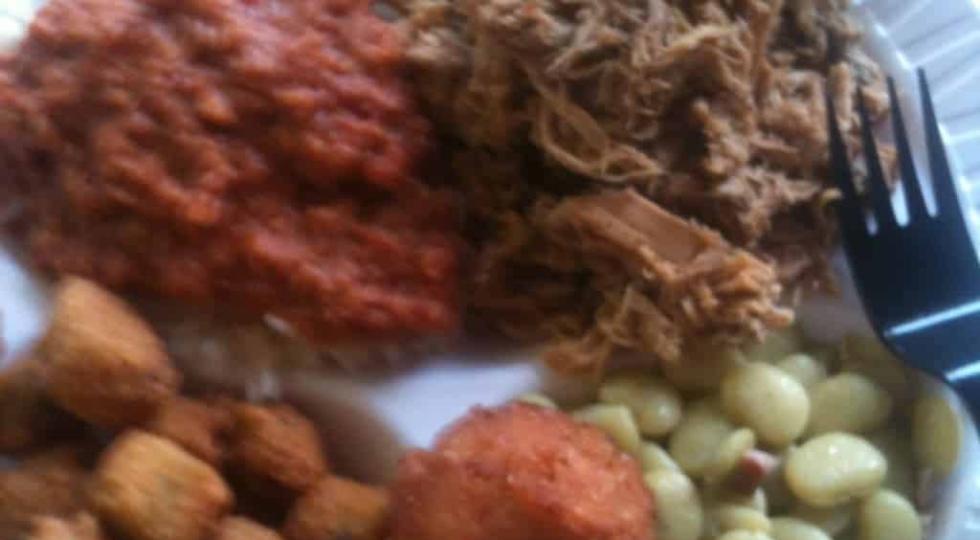 Mamma Brown’s is a bit like a long-lost friend returned.

For years, Mamma Brown’s sold a BBQ buffet in a building just around the corner from our house. While we didn’t eat there regularly, we did go there for a treat every now and again. Like a lost friend, I remember him fondly, but his faults are not forgotten.

The Mamma Brown’s that was around the corner I remember as expensive, and frankly not all that great. But like most buffets, what is lost in quality is masked by the value of quantity. So it was with Mamma Brown’s.

Well, to everyone’s surprise, after 15 years in business, Mamma Brown’s shut its doors unexpectedly on Halloween 2010. Turns out the owner of the property chose not to renew their lease. (Only very recently has that property reopened and today an infrequent visitor might be surprised to see Santi’s Mexican restaurant operating on the premises.)

Fast forward to today and Mamma Brown’s has found a new home in a defunct KFC at the intersection of Hwy 17 and Hwy 41 in “north” Mount Pleasant. Heather was away this Friday evening, so Camden and I took the opportunity to try out the new Mamma Brown’s.

The first thing we noticed when walking in was the fact that Mamma Brown’s was a buffet no more. The KFC had been nicely remodeled and when we entered Mary Alice Brown herself stood behind the cash register awaiting our approach with a smile on her face. It seemed clear she was happy to be back in business. In fact, everyone we interacted with at Mamma Brown’s was very pleasant and the service was top-notch.

We perused the extensive menu board behind her and finally placed our order. Camden ordered a half rack of ribs with mac and cheese and green beans. I ordered a BBQ plate with 4 sides: coleslaw, hash and rice, butter beans, and fried okra ($30.94). Each order came with two hushpuppies.

Interestingly, Camden, who is 12, actually remembered the hush puppies from the former Mamma Brown’s and said on the way he was looking forward to them. Me, I had forgotten about them completely. To cover it now, they were good. Big, not greasy, a bit sweet, not too dense.

We got our sweet tea, had a seat, and awaited our order, which arrived shortly.

Camden liked his ribs. They were plentiful, large, and meaty, coated with a red sauce.  I found them overcooked to the point of being dried out. Every bite I tried of the rib he gave me was dried out. That said, Camden did like his.

As for my pork BBQ, I ordered the vinegar-based and got vinegar.  I later said, “I thought it was close to Brown’s in its vinegariness.” That’s not a good thing, by the way. Let me say, that it wasn’t as obnoxiously vinegary as Brown’s, but it was more straight vinegar taste than any good vinegar-based sauce should be. Truth be told the BBQ “was okay,” but just too strong a vinegar taste.

As for the sides, Camden said his mac and cheese “was awesome.” The green beans “was like sweet, smokey…. something like that,” he said.

As for mine, “I had the fried okra which was fried okra. Nothing special about it, but not bad. Just typical. I had the coleslaw, which was interesting. It was dry.. wasn’t watered down with mayonnaise. I liked it. I liked the coleslaw. I was different but good. The butter beans were really good. I enjoyed those. They had good flavor, smoked meat was in it of some sort.”

“I had the hash and rice. The hash was sweet, thick; it sat on top of the rice. There wasn’t much liquid that soaked through the rice.”

I thought overall that Brown’s was… okay. Camden gives it higher marks.

In the end, it is like an old friend returned: you are happy to have him back, but the nostalgia doesn’t overshadow the flaws that were there all along.