“The 1st Family of Mustard-Based Barbecue!”

A South Carolina tradition since 1939, Melvin’s Legendary Bar-B-Que restaurants are beloved and famous across the South for the best St. Louis style pork ribs, chicken, and “All Ham” Bar-B-Que.

But don’t take our word for it, drop in and experience the flavor at either the Mount Pleasant or James Island location.

Wednesday night is Kids Night, one child eats free with each paying adult!

Melvin’s Bar-B-Que: A Bit of History

A farmer by trade, Big Joe had a talent for barbecue. Word quickly spread about his barbecued pork, cooked inside a pit dug deep into the ground then drenched in his special mustard sauce.

At his wife’s urging, Big Joe bartered away the family cow and mule in exchange for a small café in Holly Hill. Holly Hill Café opened its doors in 1939 serving mustard-based barbecue.

But the ongoing Great Depression forced it to close before long.

In 1955, Melvin closed the Holly Hill eatery, striking out for nearby Charleston.

After nearly twenty years together, Melvin decided to part with his brother to go out his own.

He opened Melvin’s Legendary Bar-B-Que in Mount Pleasant, SC. Melvin’s later expanded to a second location on James Island in 1984.

When Melvin’s son, David Bessinger, became more involved in the business, he added items to the menu like Texas-style brisket and burnt ends. Going back to his roots, David stopped using gas-assisted pits and brought back smoking meats over all wood.

In addition, he developed new recipes for dry rubs, brisket rubs, and sauces, and ventured into the retail world by selling Melvin’s Golden Secret® BBQ Sauce in grocery stores and specialty shops throughout the United States.

“I can’t make the sauce in the old farm shed any longer; however, I do stick to the fundamental BBQ sauce traditions that were passed down to me from my granddaddy and father.”

What Folks are Saying about Melvin’s Legendary Bar-B-Que

Among the many Google Reviews of the James Island location, Local Guide Tom Fernandez shares his thoughts on the food and the Ten Commandments:

The food was absolutely fantastic.

My wife and I shared the BBQ Trio Combination Plate: Ribs, Chicken, and Pulled Pork. The meat had an excellent dry rub on it to the point that – if you wished – could eat it w/o any sauce and it still tasted fantastic.

All of the meat was also smoked perfectly. Our sides (Mac & Cheese and Green Beans) were also good.

The sauces on the table (Red, slightly spicy; Golden, a sweet mustard BBQ) were to die for. I loved the golden sauce.

My wife is not a fan of mustard BBQ; however, she loved this so much that she primarily used it.

Customer service was nice and quick. The man who took our order at the cash register even walked around to ask people how they were enjoying their food.

As far as the ten commandments being on the cups: it was a welcome trademark. Disregard the ultra-atheist comments against it.

Over on Yelp, Charleston-area local James S. writes that he’s finally found the one place among Charleston’s BBQ joints that really separates itself from the pack:

I’ve eaten at several BBQ joints here in Charleston and I have to say that Melvin’s Legendary Bar-B-Que is my new favorite.

Service- Didn’t really stand out above the others, but no complaints.

Food- This is where it stood out. I had the BBQ pork. It was very well done. It had a mustard sauce base.

My friend had the BBQ brisket with a BBQ sauce base. I was able to sample his. I would have been satisfied with either.

The onion rings were sinful- a sweet heavy batter covering each. There were only two because they were so large.

We all had the basic combo, yet we nearly had to be carried out of the place.

Overall- With a sea of BBQ places, this place managed to stand out among the pack. I highly recommend.

Yeah, ok…sure. You can pull positive reviews from a website, but what do they know about BBQ? What about the folks who train the judges for BBQ competition in South Carolina? What do they think?

Here’s an excerpt from their review:

Melvin has a dry-rub rib (unlike his brother, Thomas, who serves a wet-rub rib at Bessinger’s) that is a little different from what you get everywhere else. It’s tender but you can see your teeth marks when you take a bite.

This is the hallmark of a great dry-rub rib. He cooks them with real wood, low and slow, just as he does his barbeque.

And speaking of that barbeque, it just “looks” right; that is, when you get it on your plate it has some of that wonderful outside “bark” that real barbeque aficionados crave and it has that tell-tale pink smoke ring on some of the pieces. 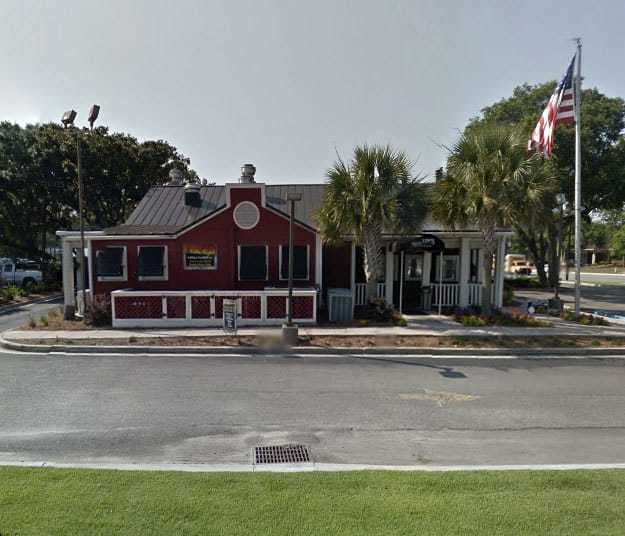