Whether from Tennessee, Texas, Georgia, Louisiana, or the Carolinas, southern BBQ is the sweetest and most sultry taste around.

Complete with all the fixin’s, Little Pigs’ southern comfort food is sure to satisfy any appetite. Their recipes have been gathered for over 50 years with strong roots in the South and its tradition of BBQ and great food.

Bring the whole family and experience the Anderson tradition for yourself.

You’ll never forget your first time! You’ll be back for more.

Among the many Google Reviews, Local Guide Matt Edwards has a lot of experience eating at Little Pigs in Anderson, and he’s still impressed:

Great BBQ and you get enough for at least two meals!

This is reviewing a to-go order but I have been going here for years and it is an excellent lean BBQ and one of the best mustard BBQ sauces I have had.

The To-Go plate was so full of food the container could nearly suffer the weight.

The sandwich was packed full of BBQ so much so you have to take off at least half of the BBQ to take a bite of the sandwich.

The coleslaw is really good and light on the mayo. The baked beans were great with bbq mixed in with the beans.

I even got a large container of mustard sauce to use at home and I normally order a vinegar-based sauce. The other sauces may be good too but we have always got the mustard sauce.

Over on Yelp, Patrick E also leaned on years of eating at Little Pigs for his review:

Been eating here since I was a small child. Now as a middle-aged man I still love it.

The sauce is the boss here. The original sauce is just divine. Tangy as it has always been.

Now, they also offer mustard-based and a hot version of the original.

The portions are very generous and the prices won’t break the bank. If you leave hungry it is your own fault.

It’s been a fixture in the Anderson community since the 1960’s – and for good reason, it’s just simply good BBQ.

Sure, folks on review sites often have great things to say about a place, but what about the folks who really know SC BBQ better than anyone?

What about the folks who actually train the judges for SC BBQ competitions? What do they think of this place?

The SC BBQ Association has named this place one of the Top 100 BBQ houses in the state.

There are hot dogs, chicken fingers, grilled cheese, ham and cheese, ham sandwiches, and other basic diner fare but if you want to see how it was in the 1960s and 1970s in towns across the South, duck into The Little Pigs and get a plate.

What you will get is barbeque done in the original Little Pigs style, which is, for all practical purposes, Georgia style.

The people in Anderson have been doing it for forty-five years and Little Pigs is as popular as ever. 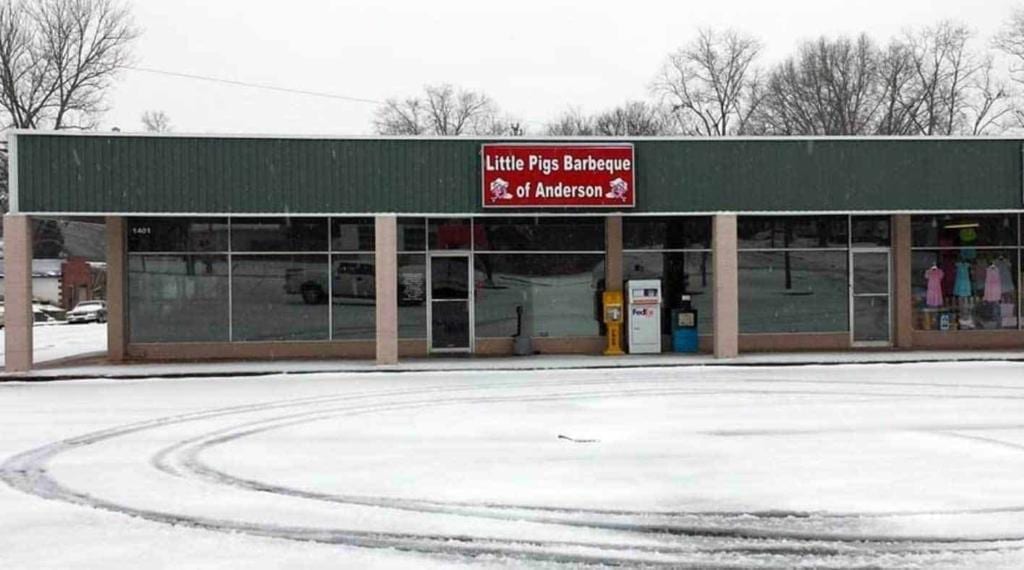 The Little Pigs of Anderson