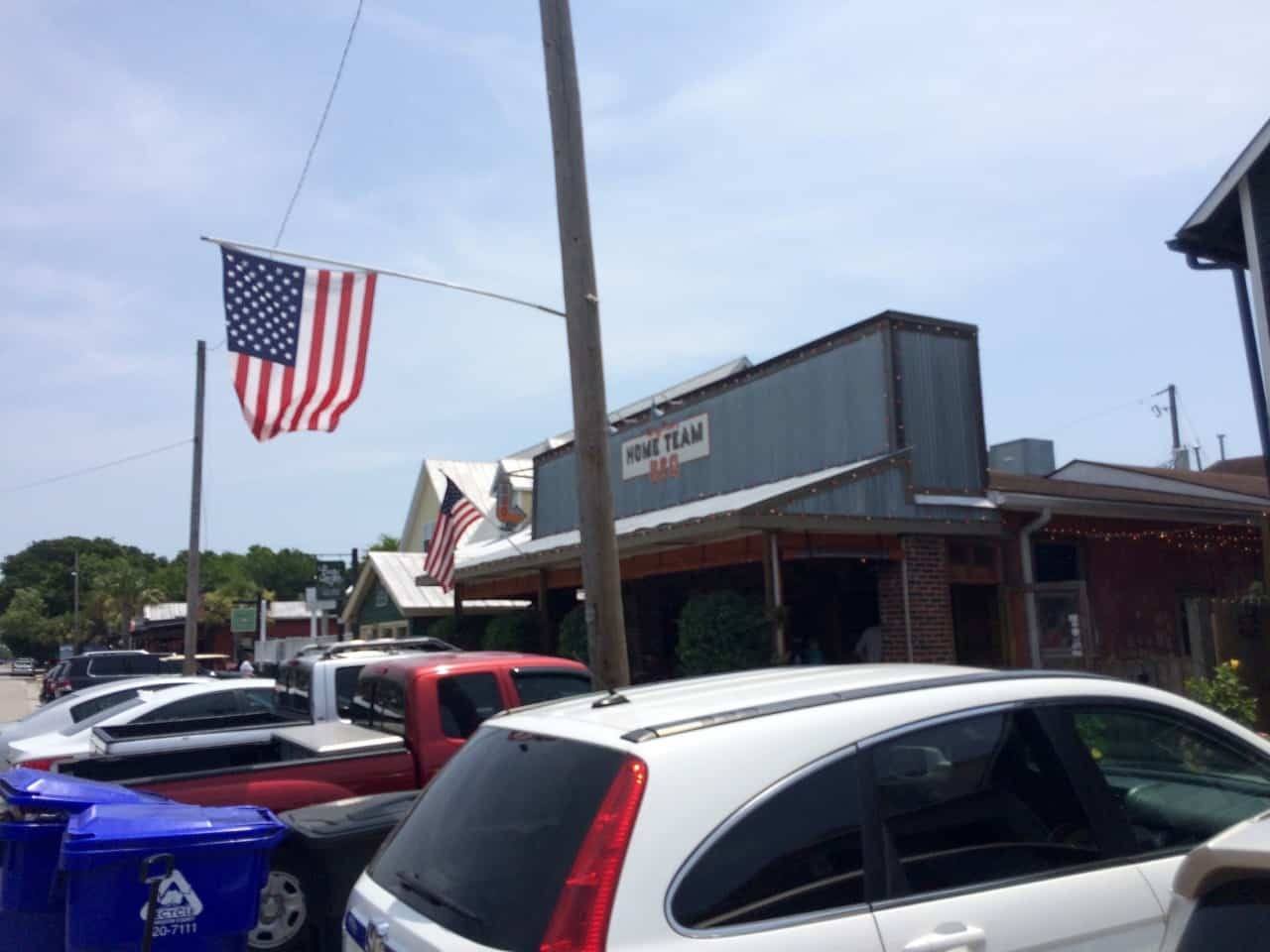 Fiery Ron’s Home Team BBQ on Sullivan’s Island does a great business, but I suspect our last review did them no favors.

Frankly, the review was too harsh and probably unfair, not unlike the original Bessinger’s review from 2012. In Bessinger’s BBQ Revisited, I explained that I revised the original of each of these reviews and decided each deserved another tasting. So, when a colleague invited me to have lunch, I suggested Home Team on Sullivan’s Island.

I figured I would give it another shot to see if it was different this time.

In truth, it was.

I ordered a rib plate with 3-4 ribs for about $12. With the ribs, I got collards and baked beans.

In our first (and only) experience, I wrote the following about the ribs:

“They weren’t very good. I don’t know how anyone could like them. They are coated with what I am guessing started as a dry rub. It has no flavor and sits on top of the ribs like a layer of sawdust. That is the most honest comparison I can make. It doesn’t impart flavor, heat, or spice of any sort. It coats the tongue and masks any flavor the ribs may have picked up from the smoke.”

I have no idea what happened that night, but that is exactly what we experienced.

Looking back on it now, all I can figure is that that particular set of ribs did not cook properly. The meat was cooked, mind you. There was nothing about the meat that was undercooked at all; however, no “bark” (the dark, crunchy outer layer of barbecued meat) ever formed on those ribs. The outside was like wet sawdust coating the meat.

The ribs I had this time were completely different.

Gone was the damp sawdust paste, and in its place was a dark bark that formed a nice crust over the ribs.

These ribs were certainly much better, though I have to say in this case they were a bit too done and the meat was dry in places. It was not bad, but it was noticeable.

Overall, I enjoyed the ribs, particularly with the heavier, tomato-based sauce that was one of the options among the bottles on the table. (That was the only one of the sauces I tried today; all the sauces are described in the previous review.)

The ribs weren’t perfect, but having tried them again, I have to believe we just happened to get them at a bad time on our original visit.

That said, while the ribs were enjoyable, I am still left with the experience that there is inconsistency in quality. The first set had no bark and the second set was a touch dry. I would no longer suggest you avoid the ribs but would have to advise to check for the quality upon their arrival at your table.

Also, the wait staff we had was great. I am confident they would address any concerns you might voice.

As for the sides, like last time, I enjoyed the collards. They are sweet with a good smokey flavor, similar to what I previously reported. The baked beans were fine as well.

In the end, I was glad to find the ribs were much better than in our original visit, and I am confident that the first visit was an anomaly.

Give Home Team a try and let us know what you think.