Camden had a baseball tournament in Myrtle Beach this week. Today, the team made it to the championship round, then we went searching for some local BBQ.

We found Little Pigs was about 12 miles up the coast from our location so we turned right, rode up Ocean Blvd., and soon found ourselves at the small, nondescript gas station/strip mall which Little Pigs calls home.

We entered and approach a blonde woman who would seemingly have rather been anywhere else. After perusing the menu (and avoiding her vacant stare), we placed our order: two chopped pork plates with mild sauce, one with onion rings and slaw, the other with baked beans and potato salad. With the sweet teas, that added up to $22.06. (Camden wasn’t hungry and didn’t eat with us.)

We filled our teas at the drink station and awaited our order. Soon order 35 was announced and our lunch was at hand.

First of all, Little Pigs claims to make “Hickory Smoked” BBQ. If it is indeed smoked, it is not obvious in the smell or the taste. That said, the BBQ was okay overall.

“It was nothing special, other than that the sauces were good,” Heather said. “But it’s not about the sauces, it’s about the BBQ. It has a really good sauce, but the BBQ is nothing special. To me, when they chop it like that, it is almost to the point of mush when you add the BBQ sauce… to me, it makes it mushy.”

In our experience so far, it has been clear that we favor pulled pork to chopped in most cases. This was no exception.

“I can see eating there if there were no other options, but I would not drive to it,” I said. “I certainly wouldn’t drive two hours to go there. If it was around the corner and I wanted to grab a quick lunch then maybe. Would do same with Bessinger’s, but I would say this is way better than Bessinger’s.”

They also had a hot sauce. The hot sauce was alright. It was their mild sauce with a spicy ingredient of some sort added to the mix. The vinegar sauce was… I would suggest skipping that one entirely.

As for their side, Heather said the onion rings were hot and not greasy, which poorly cooked onion rings have a tendency to be. The coleslaw was similar to KFC’s, with the finely chopped cabbage and other veggies mixed with a tangy, sweet, mayo-based dressing.

I found the baked beans to be pretty good, not simply from an opened can. The beans seemed to be in a nice sauce that included brown sugar and a smokey flavoring (liquid smoke?). I also had the potato salad. It was a yellow potato salad with a mustard/mayo base. I enjoyed it.

Overall, Little Pigs is a fine place to grab a sandwich if you’re driving by, but we don’t think it is so good that you’d want to drive long distances for it. 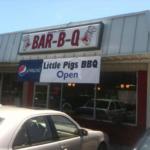 Here is a map of Little Pigs’ location: