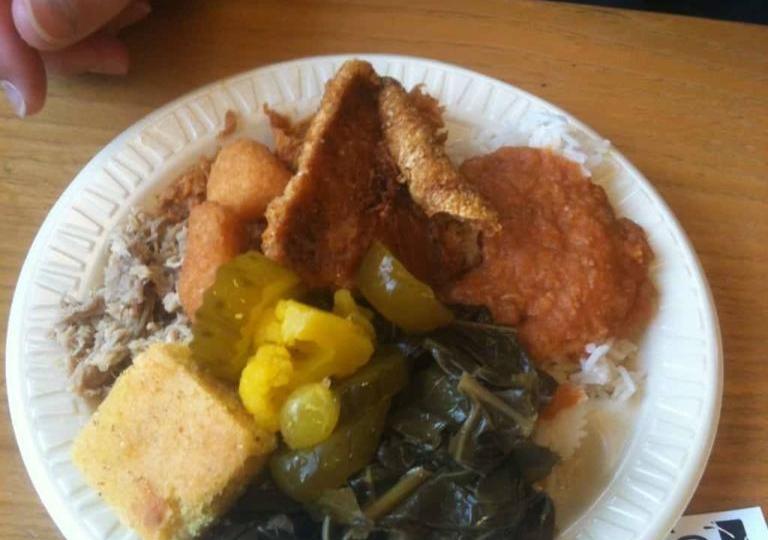 This Restaurant Has Closed.

This review was supposed to be about Dukes BBQ in Ridgeville. As you will see, it is not.

Heather, Camden, and I were eager to go up to Ridgeville to try out Dukes. I had heard good things about it, including the notion that they cooked over wood. If we have found out anything in our BBQ tour this summer, it’s that pig cooked over gas doesn’t compare; it simply doesn’t. That’s not to say it can’t be ok, or even good, I guess, but it will not ever be exceptional.

Another rule of the road we discovered the hard way: call ahead. I said this review was supposed to be about the Dukes in Ridgeville. It’s not.  And it’s not because… well, here is our story:

We set out for Ridgeville after Heather got off work on Friday. We trekked up Hwy 78 through Ladson and Summerville, passing three other BBQ places along the way: Kelly’s BBQ, Moose’s Famous BBQ, and we even spotted yet another Duke’s BBQ.  We happily pass by all three looking forward to the Ridgeville BBQ.

Well, eventually we arrive only to find a poster board attached to the door announcing their vacation plans for the week. Lesson: call ahead if you want to be sure they’ll be open.

So, we turn around and head back toward home, checking the iPhones for our best options. We decide to settle on Moose’s or Dukes. At the last minute, we chose Dukes.

Bad choice. Now, let me say that Dukes is fine. It’s decent food cooked by decent folks who are doing a decent job. Nothing at all wrong with it. The place is clean. It’s in a new building. The people are friendly.

It really would be better if they called it Duke’s Country Buffet. But you know, it’s called Duke’s BBQ, and if BBQ is your name, that is what has to stand out. Theirs does not.

We stepped in behind a family at the cash register, surveying the place. Nice, clean. Buffet against the back wall with a lot of selections. We place our order for three buffets ($29), step to the right and begin to fill our sectioned, styrofoam plates.

There are three different meats in the first section: two chopped pork, one of which is pre-sauced and is a shade of orange, and what appears at first to be dark pork, but I later realize is beef. There is also barbecued chicken and fried chicken. There is a large selection of sides that follow: rice and hash, fried okra, fried corn nuggets, collards, lima beans, mac and cheese, black-eyed peas, baked beans, pork skins, and more. The desserts included banana pudding, blueberry cobbler, peach cobbler, bread pudding, and more.

As you can tell, there is something here for everyone. As I said, call it Duke’s Country Buffet and you have a better sense of the place.

We sit down and dig in.

We can tell at the buffet that we’re not going to be impressed. There is no hint of smokiness in the air or in the meat, sure signs of a gas-cooked pig. I will say the pork is tender, not overcooked, and moist, a clear improvement from our experience in Orangeburg. In fact, mine was better than I expected.

I had some plain and some sauced. The plain tasted like roast pork, nothing more. I did, in fact, think the sauced version was ok: a good mustard sauce, not too sweet, with some tanginess. It was fine.

Camden, who had the beef, said, “Just barbecue…,” with a tone and a breath implying it was nothing special… just bbq. “On a scale from good bbq to great bbq, that didn’t even register,” he followed.

Heather agreed. “It was a country buffet with barbecue on it. There was nothing that stood out that was worth driving to. It was just sort of… eh, you know; it didn’t do anything for me,” she said.

Dukes had four or five sauces:  mustard, hot mustard, orange mustard, and a vinegar/pepper. These were placed on the buffet to add as you went. I tried them all. Don’t waste your time with the vinegar. It might be fine on greens, but not pork. The only flavor is straight vinegar, nothing else. All the other sauces seemed like variations of one main mustard sauce. Like everything else here, it was fine. Nothing special.

As for the sides, we tried a good variety of items, and there is a lot to choose from. Heather “tried a little of everything: green beans, lima beans, and stewed okra, but none of it was…” And the sentence trailed off. Camden had the mac and cheese, white rice and cornbread. He didn’t have much to say about them. I had the collards, hash and rice, cornbread, pork skins, and corn nuggets. They were all fine. Nothing wrong with them, but again nothing spectacular.

We agreed that their fried chicken is very moist and crisp. Very good. Go for the fried chicken. Maybe for dessert…

As for the BBQ, go to Moose’s. We stopped by for a pound on the way home and found the inside of the building as smokey as the pulled pork we drove away with. We’ll head back there sometime for a more thorough review.

Until then, again, Dukes of Summerville is a fine country buffet with lots of choices. Go there for some decent country fixin’s, just don’t go expecting the BBQ to be exceptional.

Here is a map of Duke’s location: