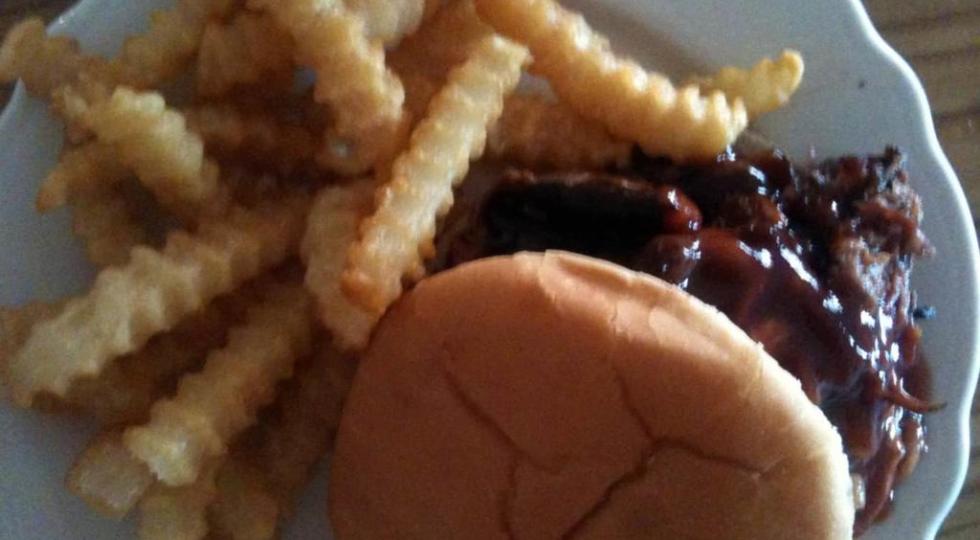 UPDATE (10/20/12): I am sorry to report that Ray’s Rib King has closed. Ray remains in the catering business, however. I was alerted via the comment at the bottom of the page and confirmed the closing with Ray himself.  See Ray’s message to me posted in the comment below. Also, if you need a caterer, his contact information is below as well.

A friend once joked that if this blog ever got any traction that restaurant owners would be giving us free food to review. We got free samples today, but Ray of Ray’s Rib King had no idea about our endeavors. He is a man who is simply proud of his product and is eager for others to enjoy his work.

It is hard to impress upon you in words just how impressive Ray’s BBQ is. It is elite…exceptional. It is the best pure BBQ we have tried so far on our journey. Yet, it is different. Not necessarily better than Scott’s or McCabe’s BBQ, rather different but equal in its own way.

Ray creates what I guess must be a Texas-style BBQ. We are accustomed to whole hog, pulled pork BBQ with a vinegar/pepper sauce. For that style, Scott’s and McCabe’s stand-alone so far. Ray’s is cooked with oak wood, and the sense of smokiness pervades every bite in ways more wonderful than we have known. No way to compare the two styles. One can only appreciate each as masterpieces in the sense that one might appreciate both Van Gogh’s impressionism and Dali’s surrealism: each masterful… sublime…yet too different in style to compare to one another. In the end, each deserves to be appreciated as elite talents. So it is with Ray’s…

I knew we’d be going for BBQ today after Heather got off work from the farm. I thought we might try Duke’s in Ridgeville, despite our less than stellar visit to its distant cousin in Orangeburg. However, Heather had spotted Ray’s in Yemassee in doing her research and suggested it when she walked in the door. So, off to Ray’s Heather, Camden, and I go.

Yemassee is a whistle-stop, pure small-town South Carolina, no question. Its strongest connection to the rest of the world is the newly refurbished train station and the nearby rumble of traffic on I-95, and its biggest claim to fame may be its starring role in an upcoming Lifetime Television reality series The Week the Women Went. (Despite reports to the contrary, the show has not aired as of this writing, much to the chagrin of some in Yemassee.) While TV may provide this community some fame, Ray’s is the real star of the show.

We arrive around 4:30 and find Ray’s. It is housed in an unpretentious brick building within sight of the train station. It is not much to look at, and you might even hesitate to enter, but don’t let this stop you. There is one other car in the parking lot. We enter and the smell of smoke inside the rather warm interior is palpable. The room smells of a smokehouse and we know we are in for something special.

The interior is simply adorned with wooden picnic tables covered with red and white checkered tablecloths. There is a small set of warming trays with today’s sides in front; to the right is a large CRT TV set playing old episodes of I Love Lucy quietly in the corner. In a lower area to the left, the wall is hung with photos of each president who share the walls around them with photos of customers who have clearly loved the place.

We step up to place our order and are greeted with a friendly smile. Camden orders the rib plate with rice and mac and cheese. Heather and I order the chopped BBQ, mine with fries and collards, hers with green beans. We each get sweet tea. After eating, we would order one serving of bread pudding and sweet potato pie for dessert. Later, to go, we would order 1/2 rack of ribs and a container (1 lb?) of chopped pork. Total = $58

Ray, who actually came out and greeted us shortly after we entered, pokes his head through a “window” from the back and suggests we sit down in the lower area (three steps down from the main area) where it is cooler. We take his advice as the building is warm and the window A/C struggling to keep up with the 100° day.

As our meal is prepared in the back, our tea is delivered. We check out the photos on the wall, and I read the article posted nearby about Yemassee starring in the Lifetime reality show.

Camden receives his plate first. Two meaty ribs sit atop the rice and mac & cheese. The meat on the plate tells the story of the campfire smell which pervades the room. His ribs are topped with a light coating of a BBQ sauce. It looks fantastic.

Next, our plates arrive. We both thought we had ordered the chopped pork BBQ plate, but we must not have been clear as we received the chopped pork sandwich. Mine was a bun piled high with smoke-blackened pork complemented with a tomato BBQ sauce with crinkled fries on the side and a small dish of collards. Heather’s was the same without the fries and with green beans instead.

You sense that from the first moment you step into the room, but when your taste buds get their turn…Wow…just wow!

“That was the best BBQ that I have ever had. It didn’t even need sauce,” Camden proclaimed on the ride home.

And it wasn’t just the BBQ: the sides and the desserts were extraordinary. More about those in a minute.

Camden said, “God blessed him with the power of BBQ.” And so it is.

I commented that there was “no rub… it was all wood smoke flavor. Everything was exceptional. It was just delicious. Every… single… thing.” Heather completely agrees.

If we had to find a negative, here they are: Camden, from watching BBQ Pitmasters on TV, learned that rib meat should not fall off the bone; if so, it is overcooked. So, supposedly, Ray’s were overcooked, but as we all will attest, that theory did not detract at all from Ray’s product. Also, both Heather and I had small nubs of rubbery cartilage in our sandwiches. Insignificant distraction in light of the overall product.

As for the sides… simply fantastic. As for Heather’s green beans, she said, “The green beans were fresh, not out of a can, and they were cooked in something I could have drunk.” My collards were equally flavorful. I was doubtful at first glance, but I was wrong. Great taste. Even the fries were perfect: freshly cooked, hot, and salted perfectly. Camden’s Mac & Cheese was “just straight-up delicious. It was crunchy on the outside then when you took a bite out of the inside, it was just a blast of flavor,” he said. The white rice, however, he said “was a little hard.”

As we were enjoying our meal, Ray came out to check on us. He sat down and joined us for a bit. He told us the story of how he got started cooking as a young man, his work as a judge in BBQ contests, and some of his favorite BBQ places (Cattleman’s in Jacksonville was his first response, and then, more locally, Belly’s in Lexington). He talked a bit about the Lifetime show they filmed there and his wife’s recent back surgery.  He also mentioned that he didn’t know how long he’d be able to remain at that location as Yemassee is a small town, implying that business had been suffering.

During the conversation, he asked if Camden had shared a rib with us, which he hadn’t. “Because he is the friendliest person on the face of the earth, he came out and just started talking to us and went back in and got us a rib with no sauce on it without us even asking,” Heather said. He was solely motivated by his immense pride in his ribs and wanting to share that with us. It was, of course, divine. Smokey, succulent, rub-free, sauce free, superior to any rib we’ve ever tried.

He refilled our drinks and we ordered some dessert: bread pudding and sweet potato pie,  his wife’s recipes. Unfortunately, her peach cobbler was left to our imagination, as it wasn’t on the menu today as a result of her recovery. I think it was the best peach cobbler I’ve never tasted.

The bread pudding was a firm, warm, moist slice of heaven. I am not sure of the ingredients, but we feel certain there was peach, pineapple, and pumpkin spice (no raisins). It “was simply wonderful” I stated later.

“Oh, wow,” Heather exclaimed involuntarily as she took her first bite of sweet potato pie. It, too, was warm and flavorful with an ingredient she couldn’t identify. Was it a citrusy element? We’re not sure, but the pie was excellent.

Overall, we have to rate Ray’s Rib King among the elite of the places we have tried. If you are passing by on 17 or 95 at a time when they are open (Wed/Thurs 11-3; Fri/Sat 11-6), make a point of stopping by. You could not possibly be disappointed. Both the food and the people are superior to most places you might otherwise try.

Bottom line: Was it worth the trip?

Did we even have to ask? Absolutely…

Here is a map of Ray’s Rib King’s location: