“We’ve been waiting for this place.”

That’s the refrain CJ’s BBQ 2 Go owner John LaBarge has been hearing from folks who’ve tried his barbecue for a while now. Now, the dream is a reality.

CJ’s can be found in the Lake Greenwood Shopping Center in front of the KJ’s Market in Coronaca and serves a variety of to-go barbecue in a renovated space, which includes a smokehouse out front.

LaBarge has been a resident of the Greenwood area for over 15 years. Initially, he worked as a medical device engineer and consultant. But then COVID-19 hit.

LaBarge, who had long been making barbecue as a hobby, suggested opening a restaurant to his wife and son.

How it All Began

“I got started when I lived in Texas,” LaBarge said. “I built a brick grill with the capability to do indirect cooking.

“After I moved to South Carolina (2005), I bought a smoker with an offset burning chamber and began smoking meats on a regular basis. Everyone raved about the BBQ meats I produced.

“I finally decided it was time to share the fruits of my labor with the public when I built my restaurant in what used to be a convenience store.”

Now, LaBarge and his son Cliff Reda work as partners in the restaurant.

“We use a mix of pecan and hickory wood.”

His goal was to create those comfort foods that busy people simply don’t have time to make. And he found the right location to do it. Nearby, there is lots of industry where people can leave, dropping by on their way home to grab a meal that was smoked for over 14 hours.

In addition to the items mentioned above, CJ’s BBQ 2 Go also serves smoked sausage and offers five types of barbecue sauce and a handful of sides.

The sauces are Kansas City style, Memphis style, Louisiana Hot, Carolina Gold, and Eastern Carolina (thin with vinegar). The customer can select which type of sauce they would like on their meats and we will apply it for them.

Some of the pork butts are used to make hash, which sells out quickly. They make from pork butt and Carolina Gold BBQ sauce.

All of the food is To-Go because CJ’s BBQ 2 Go is a small facility with no space for seating.

Among the Google Reviews, Local Guide Daniel Stegall was impressed by the food and the people at CJ’s BBQ 2 Go:

The food here is fantastic!

Yes, it is take-out only, and they sell out fast because it is so good. I got there on Friday at around 5:30. The people ahead of me got the last of the brisket and the peach cobbler.

The ribs and pulled pork were delicious! Very nice people running the place.

Over on Facebook, several customers chimed in with their thoughts shortly after CJ’s BBQ 2 Go opened its doors: 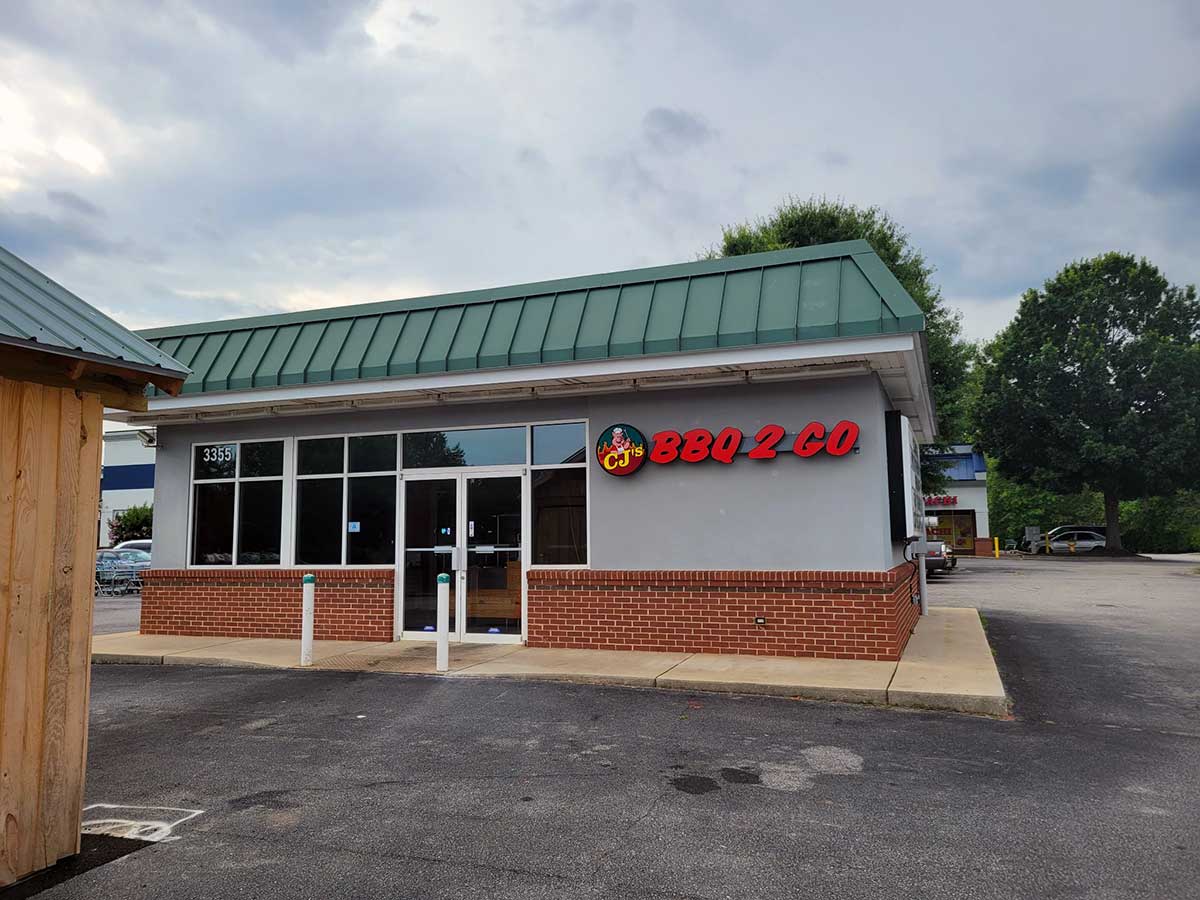