At Henry’s Smokehouse, we cook our barbecue in the old-fashioned Southern tradition with hickory logs, and choice meats are cooked to perfection at low temperatures. We cook our pork butts for 12 hours and our ribs for over 8 hours.

We hand pull all our pork BBQ. Removing excess fat and gristle, we serve a delicious, tender, and moist product.

Henry’s uses only select St Louis cut ribs, slow-smoked for over 8 hours, seasoned, and served to perfection using our own dry rub recipe.

Chicken is a boneless, skinless, breast. We trim it to our standards and slowly smoke it to maintain maximum moistness.

We serve brisket as a special on Fridays and Saturdays. Brisket is slow-smoked for at least 12 hours and is seasoned with our own special brisket rub. You have to get there early because it sells out every time.

We always serve our barbecue with a choice of sauces on the side: Henry’s tomato-based mild BBQ sauce and a mustard-based spicy sauce.

So, check our menu for BBQ and pork ribs, pull up a chair, roll up your sleeves, and dig into the best Southern BBQ in South Carolina… Henry’s!

What Folks are Saying about Henry’s Smokehouse on Woodruff Rd

Among the many Google Reviews, Local Guide CJ loved lots of things about Henry’s Smokehouse on Woodruff Rd:

The hash had a well-balanced flavor and the mustard-based sauce gave me just the kick I needed. The sides are a good portion size as well.

But look…did I mention the 50% discount for military?! Whaaaaaaaaat?! I love America and Henry’s Smokehouse.

Over on Yelp, Scott B, an NC BBQ aficionado finds something to love at Henry’s Smokehouse on Woodruff Rd in Greenville:

I’m a huge NC barbecue snob, and after 5 years of un-edible pig while living in Atlanta, I’m back in the Carolinas.  Needless to say, I needed to find a BBQ joint STAT.

I’ve always hated the mustard-based sauce but wanted to give all the Greenville BBQ joints a try.  Henry’s is by far the best I’ve had.

The mild sauce is as close to vinegar-based as I can find in SC, but the meat is the star. It’s absolutely perfectly cooked with just the right amount of hickory flavor and a good texture.

The slaw is great, beans are great, mac and cheese not so good but whatever.

The only downside is NO hush puppies or corn sticks to be found.  What’s up with that Henry??

EDIT: I’ve discovered since moving here that no one here has ever heard of corn sticks, so it must be a NC thing.  I’m not holding it against you, Henry!  But really…the lack of hushpuppies….what’s going on with that??

Definitely the best ‘cue I’ve had so far in Gville.

The SC BBQ Association has deemed Henry’s BBQ to be 100-Mile BBQ, BBQ worth driving 100 miles for. Here’s how they began their review:

The first time I tasted Henry’s barbeque was at a catering.  I thought if they can deliver barbeque that tastes that good I’ve got to find the source.

And the source was, then, on Wade Hampton Boulevard in a small restaurant that had been some other eatery in its youth.  But the barbeque tasted the same as when I first tasted it, which means it was very good.

See the other locations: 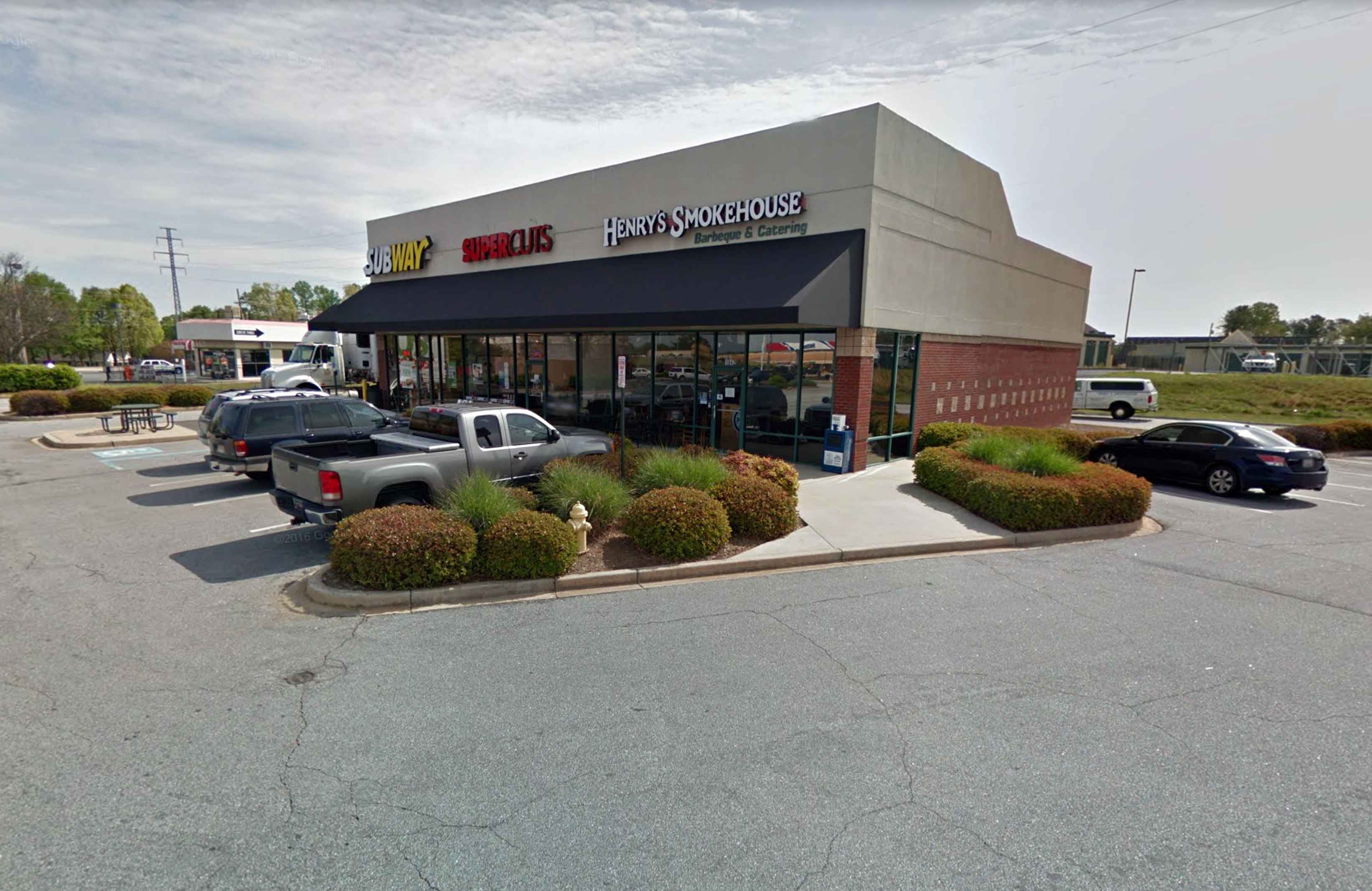