Like most trails, the SC BBQ Trail has a few rough spots. Kelly’s BBQ on Hwy 78 between Ladson and Summerville is one of those.

Heather, Camden and I decided it was time to try some new Q. We were in Summerville, where Camden’s team was playing in yet another weekend tournament. I had seen Kelly’s Barbecue traveling in the area before, so we decided to drop in after Camden’s last game on Saturday.

On the way, we looked at some reviews on Yelp and Urbanspoon, and frankly, those reviews weren’t painting the most tempting picture, but we’ve learned to make our own decisions.

We drove up and the parking lot was moderately busy. Kelly’s is in a nice building and I was hopeful, despite the foreshadowing from the social media reviews.

We entered the spacious room and placed our order at the cash register. Three adult buffets were $37.49.

After you pay, you are funneled into the buffet line. There were a large number of selections, including chicken bog (a family favorite) which I had not seen on a buffet up until now.

We picked our poison so to speak and headed to the table.

I got the pork bbq, chicken bog, hash and rice, fried skin, some sliced brisket, baked beans, and a few pickled beets. Heather and Camden also got the pork, of course. Heather pointed out there were three sauces that I had overlooked coming through the line. They are in bottles on the bread table, just at the end of the main buffet line.

I passed on the extra sauces for the first round and dove in.

The hash had a funny taste which none of us cared for. It was pretty thin for a hash and there was some off-putting taste left behind after you swallowed. Can’t describe accurately, but let’s just say we didn’t get seconds.

The brisket was a new addition to my plate, I have to confess. I have never eaten it before. That will sound odd coming from someone who writes about BBQ, but in South Carolina, BBQ is pork, not beef, and pork has been the totality of my BBQ experience.

Randy Hosley, a good friend and parent of one of Camden’s teammates, loves a good brisket, so I was eager to try it.

It was interesting. Since I have nothing to compare it against, I will not do so. I will only say it was sliced (which apparently is important) and had a good layer of fat (which is also apparently important). Interestingly enough, the fat didn’t make it “fatty” at all. In fact, it gave the meat more flavor and sort of melted into the experience.

As for what should be the star of the show, the barbecue, it was easy to tell when it was in the pan that it wasn’t going to be great. It sat there all sort of “mushed” together, both in the pan and on the plate. The meat had lost its individual strands and had become more homogenized like it had been overcooked and over stirred.

But the bottom line, as always, is taste, and unfortunately, it simply wasn’t great bbq.

I have said in similar situations before, and it bears repeating here, had the place been named Kelly’s Country Buffet, I think it would be a better description of what you are going to get, but naming it Kelly’s BBQ puts its pork in the spotlight, and Kelly’s simply doesn’t shine.

I wish I could say better things because the people there are very nice, but that’s not my job here. Go to Kelly’s and enjoy the buffet, but don’t go looking for exceptional barbecue.

Here is a map of Kelly’s Barbecue’s location: 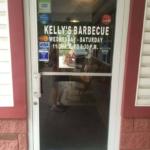 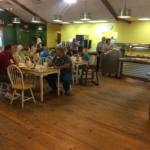