Camden and I found ourselves at Dickey’s Barbecue Pit in Myrtle Beach during a recent baseball tournament. We had a couple of hours to kill between games, and it was time for lunch.

I decided to go to Dickey’s, frankly, because it is a chain restaurant and Heather wasn’t with us, so I didn’t want to visit a local SCBBQ spot.

Dickey’s has several locations throughout SC and many more nationwide. This seemed like the perfect opportunity to try a place I didn’t expect a whole lot from and to cross off our list another place serving BBQ in SC.

Honestly, what we found at Dickey’s in Myrtle Beach surprised me…

As we drove up, I caught a corner spot right in front of the restaurant. It provided a perfect view down the side of the building where I spotted a large pile of wood. Good sign…

The smell of smoke did not hang in the air, however. Camden and I entered hoping for the best.

We stepped up to the counter, awaiting our turn and examining the menu high on the wall behind the counter. There were a large number of options, and frankly, it was a little hard to decipher the board at first.

The line moved ahead of us, but no one was behind us, so we took our time. I noticed that this seemed to slightly annoy the first of three ladies who would be serving us. Camden must have noticed it, too.

“The people behind the counter couldn’t care less if you were there,” I mentioned later.  “We seemed to be an inconvenience to her.”

“Yea…she was not nice,” I replied. “She wasn’t rude, exactly, but she wasn’t welcoming.”

“The second girl, she was nice,” Camden defended.

“The second girl was nice, yep,” I agreed. “And the cashier was nice, but that first one would have rather been anywhere else. “Course I can’t blame her, but….”

Don’t read too much into this. It could have been a momentary thing and it didn’t detract too much from the experience, but it is interesting that we had a similar experience at another Myrtle Beach BBQ joint in our first summer writing this blog.

Anyway, once we were ready, we stepped up to the counter to place our order.

The total was around $21. We paid and found a table.

Turns out we should have first headed to the counter where drinks, sauces, utensils and the like were set up. Either way, we filled our cups with sweet tea, got a couple of lemon wedges, and a container of each sauce: sweet, original, and hot and spicy. Then we sat to eat.

The first thing I noticed was a healthy serving of BBQ, and the pork itself looked clean. There were no fatty pieces to detract from the pork, and there was no grease oozing on the butcher paper below it. Good.

However, there was no moisture dampening the paper beneath it either.

“I’d have to agree with that,” I responded. “I didn’t think it was bad bbq. It wasn’t fatty; it wasn’t greasy. Mine was dry almost.”

“Yea, mine was dry and chewy,” Camden agreed.

My pork was not chewy. In fact, I would say the texture was pretty good, but it was interesting how dry it was. When I say dry, I don’t mean overcooked; it was simply not laden with moisture.

Look at the photo below. How can that much pork, which I just watched the server pull from a wrapped Boston butt, have no visible moisture soaking into the butcher’s paper? Compare that to this photo of Lewis BBQ’s pulled pork.

All that said, I think Dickey’s serves a pretty good product for what they are.

“Your barbecue?” I asked Camden.

“Eh…no taste of smoke,” he responded.

“It’s weird ’cause they have a big pile of wood outside,” I agreed.

“They’re faking it,” he claimed.

“I don’t think they’re faking it,” I said. “I think they are using it. It’s just like Bessinger’s; they’re using wood, too, but I didn’t really taste smoke there, either.”

“It is a Texas-style BBQ. Dickey’s was born in Texas,” I pointed out.

“Like that one place that’s opening up in Charleston?” Camden asked.

Camden is referring to Lewis BBQ which will open in “late 2015” in Charleston. John Lewis is the pitmaster. You can read more about him and check out our review.

“Yep, but not nearly that good,” I explained. “Oh, my! His was unbelievable.”

Again, I found the pork to be very dry, but I thought that made it a good vehicle to eat their sauce with.

They had three different sauces: a sweet, an original, and a hot and spicy.

“They were all basically the same sauce,” I said. “I am guessing one just had more sugar in it and the other one had red pepper flakes. Basically, a heavy ketchup base. Tasted like anything you’d get out of a grocery store, for the most part.”

As for our sides, we both had the barbecue beans. For some reason, I added the jalapeño beans, maybe thinking they’d be different.

“Not sure why I ordered two sets of beans… I won’t ever do that again. Basically, ’cause they’re the same thing,” I said of my two sides.

That is, both are essentially the same product with a different set of beans. You get beans in a brown sauce. Either one would be enough. No need to get two.

“My beans were… they were like pinto beans in a sauce with jalapeños in them, little diced, teeny bits of jalapeño,” I said. “They didn’t make a great companion to the barbecue beans…they don’t call them baked beans, they call them barbecue beans.  Both of them just tasted like something out of a can to me. And you?”

“Same,” Camden replied. “The coleslaw was, I don’t know… store-bought…store-bought coleslaw with mayonnaise.”

“Definitely looked like it had mayonnaise on it,” I agreed “Although the guy from Texas doesn’t use mayonnaise in his; he uses sour cream, so it could have been that, I guess, if that’s a Texas thing.”

“I wouldn’t say it is terrible coleslaw,” Camden noted. “I mean it is not the best I’ve ever had, but it is fine for a ‘McDonald’s’ BBQ place.”

Then Camden surprised me with what he said next:

“If you need something to eat in Myrtle Beach, I’d recommend that,” he said.

“Over stuff in Myrtle Beach, yes.”

“Out of all the barbecue places that I’ve been to that taste like fast food, I think that is one of the better ones,” Camden finished.

And that pretty much sums it up.

Dickey’s makes a good BBQ for what they are doing. They are not exceptional, and they are not bad. I think most people dropping in will come away happy with the quality of their meal, and there is nothing wrong with that. 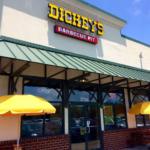 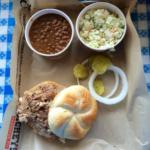 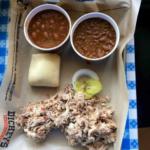 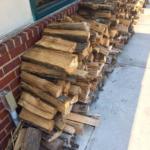 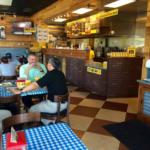 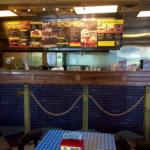 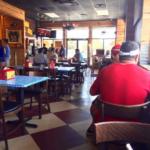 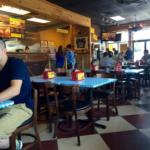 Here is a map of Dickey’s Myrtle Beach location:

I have found all chain BBQ place like Dickey's are inedible. I had the brisket ,ribs and pulled pork . Mac and cheese and green beans. My question is how can you mess up. Mac and cheese and green beans. The Mac and cheese was like yellow paste. The green beans were overcooked and mushy. The brisket was gray and falling apart. Brisket should be cut to order. The ribs were over cooked , bland and still had the membrane on the back. Finally the pulled pork was dry bland and had no flavor.many times this comes from places that use gas to cook and use chips for smoke.As a judge for three sanctioning groups I believe if your pork needs to be sauced to be flavorful you need to learn to cook. Sauce is to help enhance your profiles not to cover flavor.

Kerry, sorry I missed your comment before now. Thanks for the feedback. I sincerely appreciate your sharing your experience. Like you, I am typically very wary of chain BBQ, cooked by people who are just doing a job, not people who are personally driven by the quality of their product, so I was surprised with the meal we were served...and maybe such a mindset plays a role in the review. If you expect something to be bad and turns out mediocre, you could come away "impressed." Same scenario but with a mindset expecting great BBQ and you come away disappointed. All that said, we were in fact pleasantly surprised by our meal.