Note: Food for the Southern Soul has closed its “Cue-osk” in the Charleston market and as far as we know are no longer in the restaurant business. We do admire all that they are currently doing with catering and their online store, however. Please check them out: https://www.foodforthesouthernsoul.com/

We love really good BBQ, and we found just that in our visit to Food for the Southern Soul in the historic Charleston City Market.

Before we get into our thoughts on the visit, let me tell you how to get there because you’re going to want to go, and if you look it up on a map, you will be lost, unless, of course, you use our map.

Food for the Southern Soul is a “‘Cue-osk” (kiosk), as they call it, inside the market building that is headed by the impressive Daughters of the Confederacy building facing Meeting Street.  This particular section of the market is bounded by North and South Market, Church, and Meeting Streets. Most will enter the Church Street end, I suspect. See the photos below for reference.

It is air-conditioned in that area, which is nice, but there is nowhere to sit and eat in that particular space. There are, however, tables and other places to sit just outside.

Heather, Camden, and I headed downtown not knowing exactly where we would eat, but BBQ was the destination.

We had three options we were choosing from: Queology, Cumberland Smokehouse, and Food for the Southern Soul. All of them are in the same area, around the market.

Cumberland is relatively new. Queology has been around for a while, and, honestly, I thought that is where we were going at first, but after reading the reviews, I really wanted to try Food for the Southern Soul, which I will hereafter refer to as FSS.

We parked in the garage on Cumberland Street, a good spot to park if you are visiting the market, and headed to find FSS.

With some searching, we eventually found it and waited our turn in line.

The menu is sparse. They do what they do and that’s that it seems, and that’s ok. The options pulled pork, beef brisket, or smoked beef sausage which you can get on a sandwich or by the pound (this option wasn’t available on our visit).

With these you can just the sandwich, add chips and a drink, or 2 sides and a drink. The sides include mac & cheese, coleslaw, red rice, and banana pudding.

We each ordered the pulled pork sandwich with 2 sides. Camden and I added coleslaw and mac & cheese. Heather got the red rice and banana pudding. We all got sweet tea, I believe.

For the sandwiches, we had three sauce options: mustard, vinegar-pepper, or original (tomato-based). Heather got original, Camden got mustard, and I got the vinegar.

We sat under an umbrella at one of the round picnic tables just outside on North Market to eat and enjoy.

The sandwiches were piled with a very generous serving of pulled pork. My mouth watered just watching them make the sandwiches; it looked that good, but how did it taste?

“How was the pork?” I asked later.

“Could you taste a smokey taste?” Heather asked.

“Yea, me neither,” Heather agreed, “but it wasn’t mushy. It had great texture; it had a great appearance, you know.”

“It looked FANtastic as she was building the sandwiches, I have to tell you that,” I piped in.

“It’s definitely pulled. There are nice strands….” I agreed.

“It’s not fatty at all. It’s not greasy,” Heather continued. “In that respect, it’s good clean bbq. Clean bbq, I think that’s a good way to describe it. You know, it had nice bark on it, nice coloring.”

“The pork was real clean. Not fatty. Great texture. Pulled,” I echoed.  “It was beautiful, and I didn’t get a strong smokiness to it, either, but that may have been hidden by the sauce.”

As for the sauces, we got to try all three.

Camden had the mustard.

“The mustard sauce had a mild spice,” he said. “It was pretty good.” He’s a man of many words.

I had the vinegar sauce.

“The vinegar sauce was actually the same vinegar sauce we bought and tried at home,” I noted. We have been trying to find a good store-bought vinegar-pepper sauce, and we recently bought Hagood’s BlackJack Barbecue Vinegar Sauce.

“It’s kind of different actually. It is good vinegar pepper sauce,” I continued, “but not a great one. It lacked some of the spiciness you get with some of the Pee Dee area vinegar peppers… you know, with the red pepper flake and heavier cayenne.”

Overall, it complemented the pulled pork well and made for a good sandwich.

Heather had the “Original,” a more standard tomato-based sauce.

By that, she means “it was thick.”

As each of the sauces was served on the sandwich, we didn’t get to taste them separately.

As for the sides, I have to say it didn’t take long for the mac & cheese to win us over.

“As soon as I saw the mac and cheese, I knew we were eating there,” I said. “I was real mac and cheese. It had a top crust formed by the melting cheese. The inside had that kind of curdy, loose, moist texture you get in homemade versions.”

“The noodles were probably a little overdone,” I continued. “Probably hard not to do so in such a case, but it didn’t detract from it at all, just added to the softness of the dish.”

In short, get the mac & cheese. The coleslaw, on the other hand, got mixed results.

“The coleslaw was very mayonnaisey, if that’s a word,” Camden said, “like a lot of mayonnaise taste.”

“The coleslaw was interesting,” I said. “It has sort of yellowish tinge to it. From what had to be mustard or turmeric, though there wasn’t a mustard taste so much.”

“There were definitely pickles in it,” I agreed. “There were like sweet, cubed pickles but bigger than what you get out of the jar.” By this, I don’t mean “Sweet Cubes,” a Mount Olive brand pickle that you buy at the store, but more like almost a homemade sweet pickle that was cut up and added to the mix.

“Like bread and butters,” Heather said, “you have to differentiate.”

“I couldn’t tell you if they were bread and butters or not,” I admitted, “but it was definitely a sweet pickle. Very good.  It had mayonnaise in it though I didn’t find it mayonnaisey like Camden did.”

Pretty sure I ate every bite of mine.  And while the coleslaw drew mixed reactions, the opinion was clear on the red rice.

“I had the red rice which was FAN-tastic,” Heather emphasized. “Nice and spicy. It had good sausage, onions, red peppers. Fabulous.”

“It was really a very good version,” I agreed, and there was nothing more to say.

As for Heather’s final side…(can you really call banana pudding a side?)

The pudding was similar to what we have seen a couple of places, most notable Sweatman’s in Holly Hill who made a very good version. The custard (or “pudding”) part of the dish is mixed together with whipped cream, which makes the custard lighter, but it can also diminish the flavor.

“There wasn’t enough flavor in the banana pudding,” Heather contended, though it did have a sufficient number of bananas and real vanilla wafers.

Bottom line is, of the three places we checked ahead of time and thought we might go to, I’m glad we picked this one. We’re confident you will enjoy it as well. 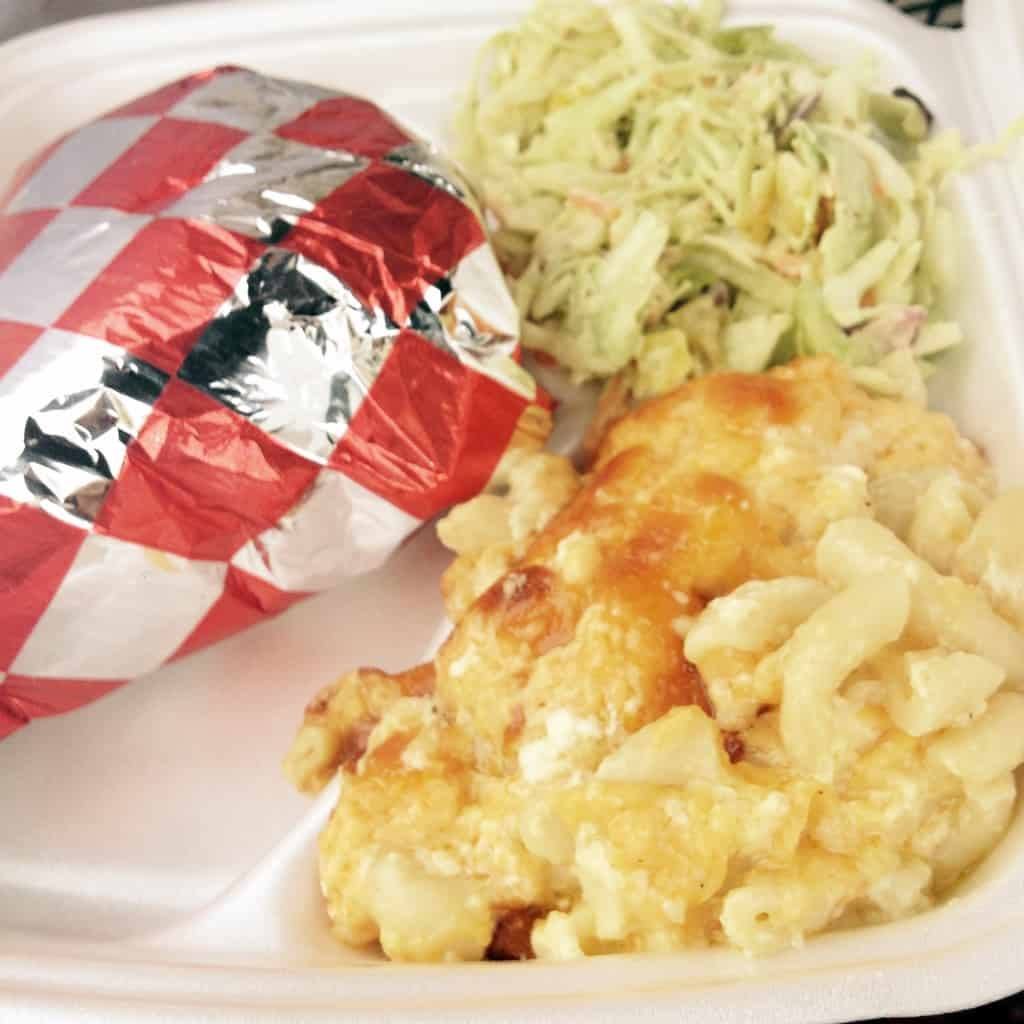 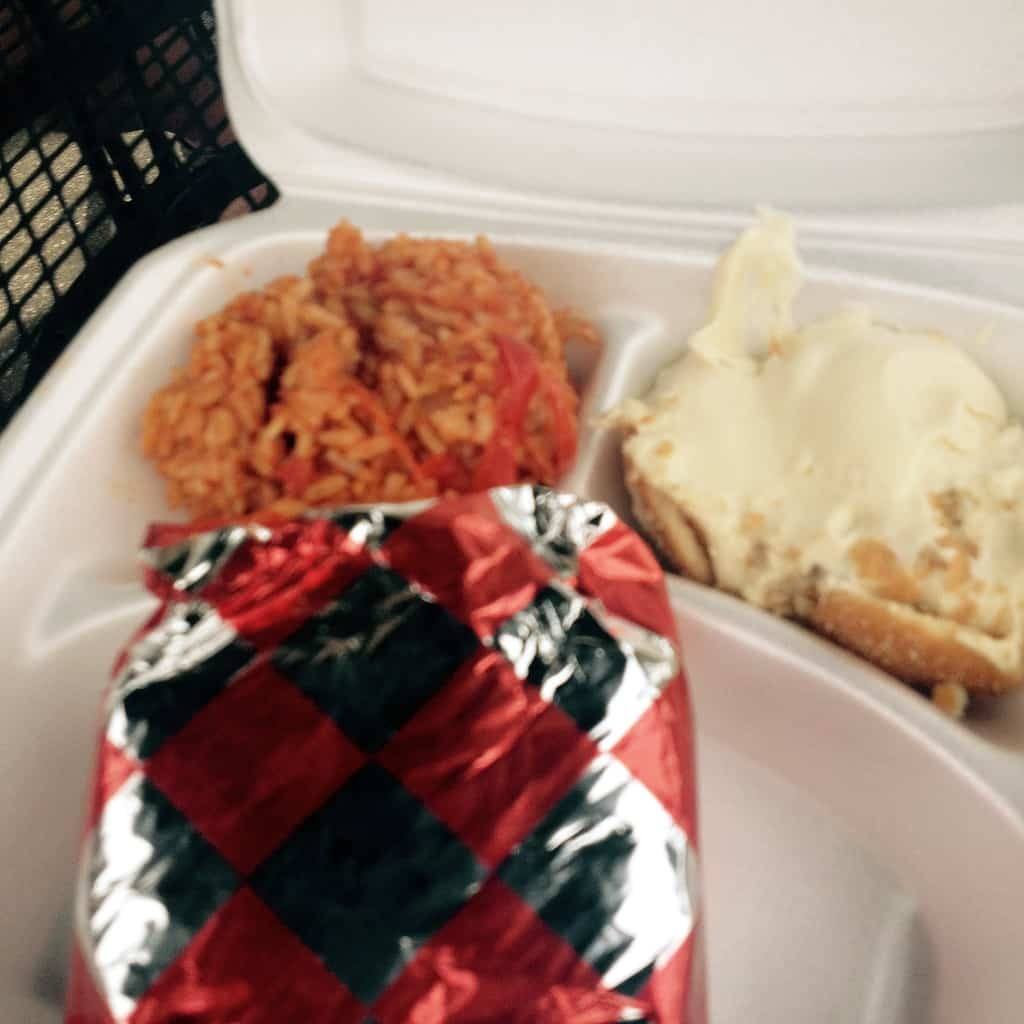 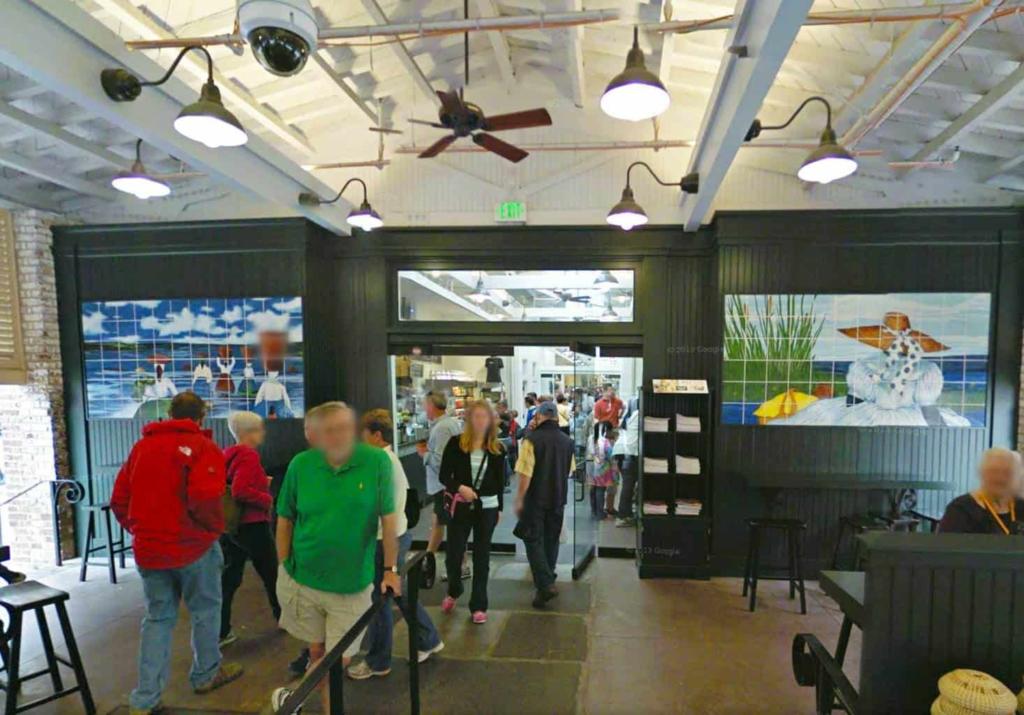 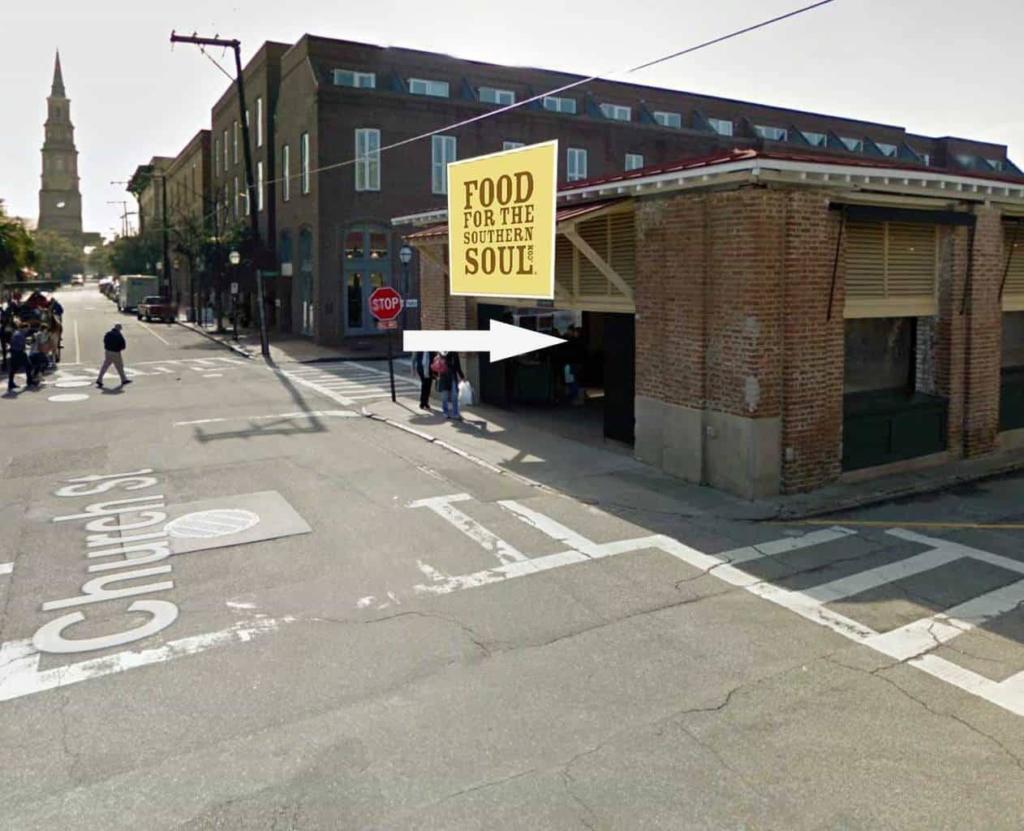 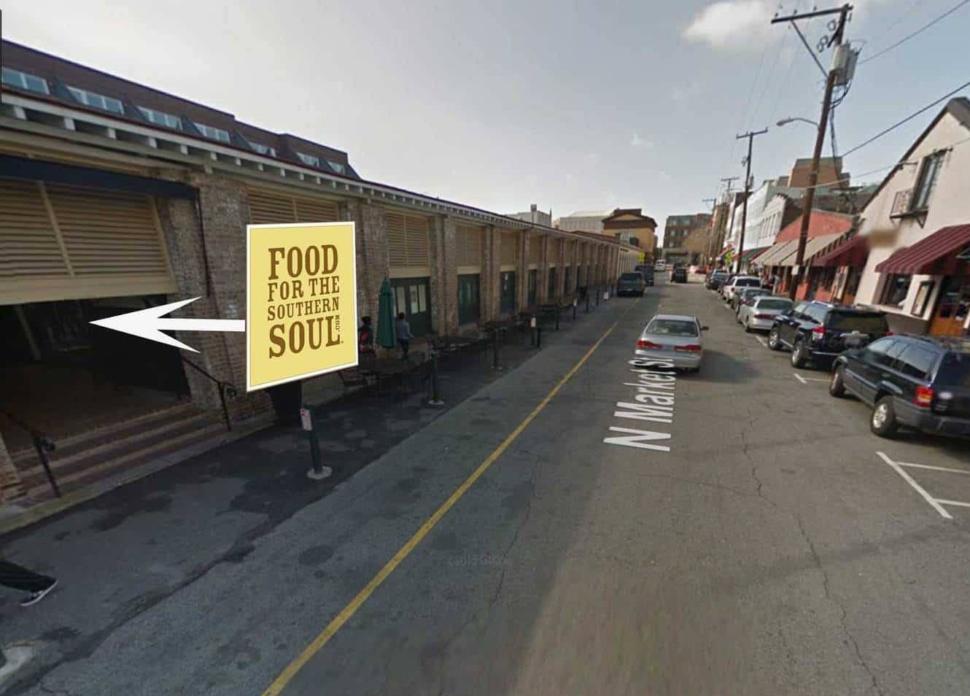 Food for the Southern Soul – Approaching from within the Market building

I have to say I was impressed. The BBQ looked amazing going on the sandwich. I will order it without the bun next time. Thanks for the recommendation. I don't generally order sandwiches when we do reviews anyway. Didn't realize it was an option at FSS. Thanks.

I go to FSS a good bit as I work in that area. It's great BBQ for charleston. If you get the meats without the buns, you get much more meat for the same price. The brisket is pretty good too, with the red sauce.