A master of Central Texas barbecue, Pitmaster John Lewis brought a new style of BBQ — and lots of adoring fans — to Charleston at Lewis Barbecue.

In addition, Lewis Barbecue offers a full bar and indoor and outdoor seating in its Southwestern-themed restaurant. It was important to Lewis to get both the feel and the food right.

For example, Lewis and his father welded the pits for the restaurant themselves. They built four, 20-foot, wood-fired smokers in Austin, TX, and hauled them to Charleston.

You’ll find the smokers set up in a separate building near a shaded patio and behind the outdoor seating area. You can see the smokehouse under the oak on the right side of the photo below:

Lewis’s vertical sausage smoker is set up near a closed-off corner of the restaurant. It is capable of cooking up to 1,600 sausages at a time.

(To make your own South Carolina-style sausage, check out this homemade onion sausage recipe.)

Customers will order at the counter and have the meat sliced in front of them. It will be served on trays on butcher paper.

“I wanted to bring a new style of cuisine to Charleston,” Lewis said. “I want this to be one of the most fun hangout places in Charleston.”

While doing pop-up events prior to opening in Charleston, it became clear how popular this new style of barbecue would be in the Lowcountry.

“We had really good reception.”

You don’t say…. it’s the reason why Lewis Barbecue earned a spot on our feature entitled “BBQ in Charleston, SC: The Definitive Guide.”

To begin, Lewis grew up in El Paso, TX.

He moved to Austin at 18 to start his culinary work in pastry, believe it or not. Sometime later, Lewis’ parents gave him a smoker, and he began trying his hand in Austin’s longstanding tradition of the backyard BBQ.

During this time, a passion was born and Lewis became creative with both his smokers and his meats.

He began taking liberties with the design and construction to find the best process and the best results.

Moving to Denver, Lewis continued to sharpen his skills by joining the competition BBQ circuit.

In 2010, Lewis returned to Austin to work with his friend Aaron Franklin who was working to open the now-famous Franklin Barbecue.

During his collaboration with Franklin, Lewis developed the flavor profile that helped put Austin BBQ on the map.

Before long, La Barbecue worked its way onto Texas Monthly’s “Top 50 List” and earned the distinction as the “Best BBQ in Austin” by the Austin American Statesman.

By March 2015, Lewis packed up his smokers and moved to Charleston to introduce the Holy City to the great world of Texas BBQ. He and his “barbecrew” opened Lewis Barbecue in June 2016.

John Lewis appeared on a CBS This Morning segment called The Dish, where the hosts interview important chefs and an occasional pitmaster. Lewis shared some information about his background as well as a few recipes.

What Folks are Saying about Lewis Barbecue

Among the over 4,000 Google Reviews, Local Guide Francisco Escobedo, a native Texan himself, recognizes that Lewis Barbecue is one of the best around:

Lewis is one of the best BBQ places in town. If you’re looking for extremely high-quality Texas-style BBQ without a long wait – this is the spot!

We normally do a half lb of brisket, pulled pork, and a sausage or two for 3 ppl. The mac and cheese and the green chili cornbread are out of this world.

Margaritas are also much better than margaritas I’ve gotten at other places in town (totally acknowledge that margaritas aren’t a Charleston thing..)

I’m originally from Texas and this stuff is as good if not better than a lot of the stuff you’ll find anywhere Dallas down to San Antonio!

Over on Yelp, Charleston local Taylor L was shocked by John Lewis and his food:

Lewis is easily my favorite stop for brisket and corn pudding. Also, I was shocked to see a video with John Lewis and that he is able to stay so skinny while on all these culinary adventures with Lewis, Juan Luis, and the cheeseburger joint to open up in the food truck when Juan takes over Workshop this fall.

The food is great. Amazing to do family-style and be able to try more.

Everybody loves some evenly distributed nachos.

Def check out their daily specials! From Fried Chicken Tuesdays to Beef Rib Saturday, they got it all. Still trying to make a Beef Cheddar Sammy Friday cuz they usually sell out during lunch.

Orders also come with free side fixings of pickles, pickled onions, and onions and they have 3 sauces to choose from.

They have a good draft selection and cocktails as well. Typical Charleston prices for drinks.

Atmosphere is great as well with lots of outdoor seating, a bar, and cool BBQ flair.

I think I need some more Lewis now.

Read Our Review of Lewis Barbecue

Our First Interview with John Lewis

See Lewis Barbecue while Under Construction

Read about the Lewis Barbecue Experience

Several of John Lewis’ recipes can be found in our latest cookbook: SCBBQ Recipes: Going Whole Hog cookbook  Read more about the cookbook and find out which recipes here.

Yes, Lewis Barbecue offers catering. “Imagine our smoked meats and sides served up with a smile at your next event,” they write. To learn more, simply reach out to them here: [email protected]

What’s on the menu at Lewis Barbecue?

Can I buy food or merchandise from Lewis Barbecue online and have it shipped to my house?

Where can I find recipes from John Lewis or Lewis Barbecue?

John Lewis has shared his recipes with several publications, many of which can be found with a simple search. Several of those were gathered and included in our SC BBQ cookbook.

Is there outside seating at Lewis BBQ and are dogs or cats welcome?

At Lewis Barbecue, you’ll find plenty of outside seating. As for animals, Lewis is certainly pet-friendly. You will regularly see dogs with those in the outdoor seating area. Similar to dogs, other animals are likely welcome as long as they are well-behaved and don’t interfere with the enjoyment of other guests. 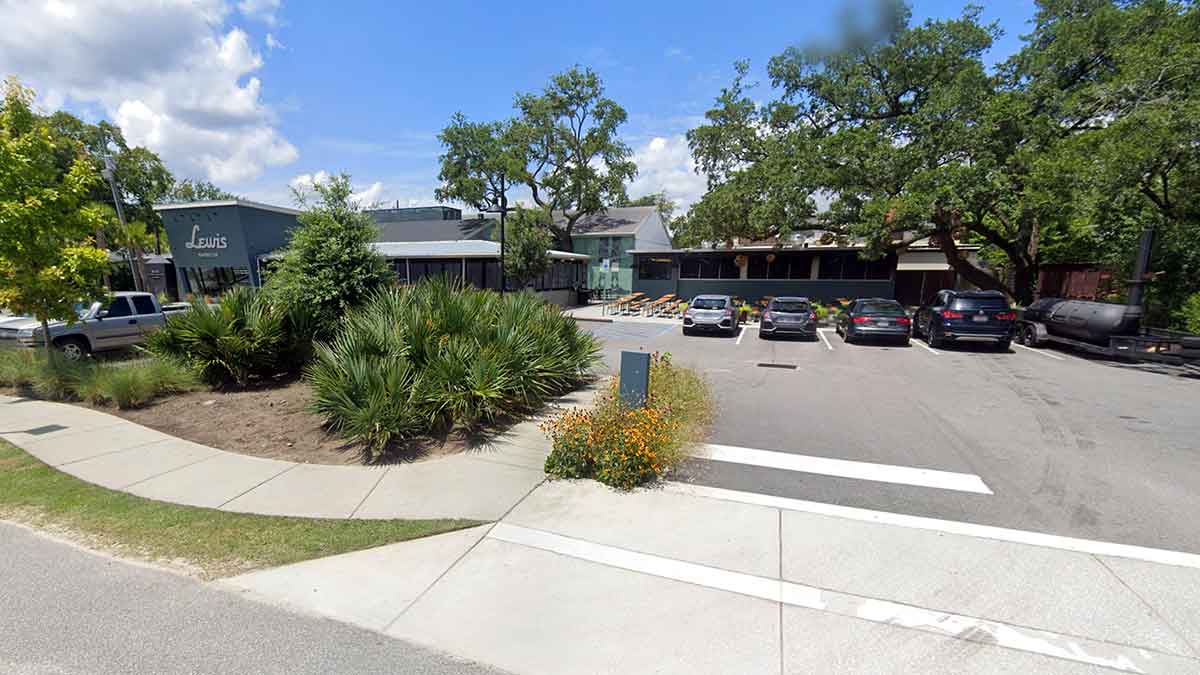