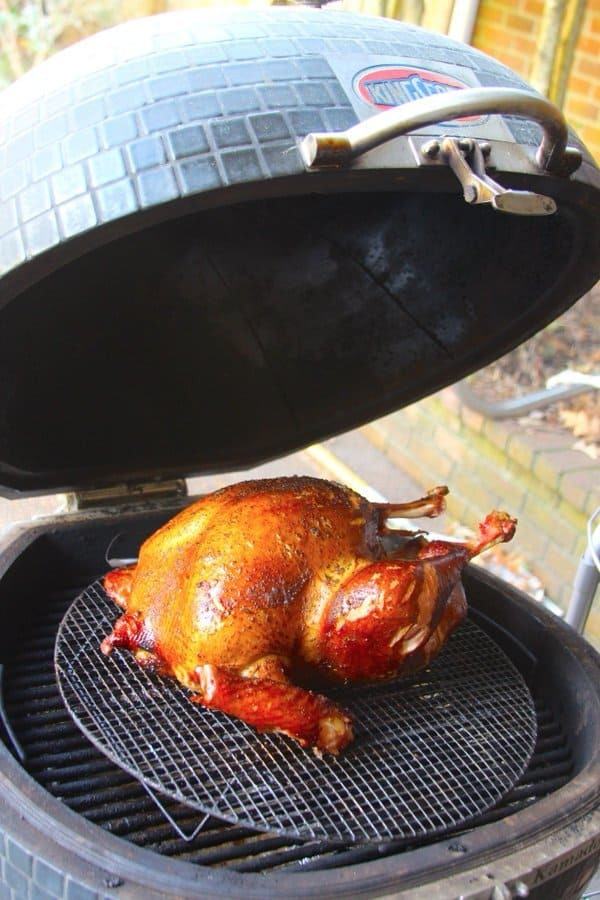 The night before Heather and I were up late cooking and preparing things for the next day.  Heather, who is fantastic in the kitchen, had made a number of dishes, including some classic Thanksgiving pies.

The bird was in the brine awaiting the next morning and the feast that it would play centerpiece for early that afternoon.

Thanksgiving morning began with me pre-heating the oven and preparing the turkey.

While the oven warmed up, I was busy pulling the bird from the brine, rinsing it down, and patting it dry. Once dry, I rubbed it down with olive oil and seasoned the outside and cavity with a simple mix of salt and pepper.

Then, the bird sat in the roasting pan waiting for the pre-heat light to dim and the oven to beep alerting me that it had reached the optimal temperature.

I’ve always liked to start the bird out really high — 500° or so — for about 20 minutes and then drop the temperature to a more reasonable 325°.

As the oven came up to temperature, I busied myself with a few other things, awaiting the beep.

And about 45 minutes later, the oven still was not ready.

Confounded, I finally opened the door to find the oven still at room temperature.

The oven that had worked just fine late last night was now useless. After some frantic efforts to figure out what had gone wrong, we discovered that the element had burned through and was now in two, functionless pieces.

Yikes…no oven. Thanksgiving morning. Family on the way from near Savannah. Panic sets in.

Heather and I discuss our limited options: they were few.

Chelsea, our daughter, had recently moved into her first apartment, so we decided we could use her oven since it was only a few miles from our house.

This seemed like the best option and we started down that road, but then took a quick detour when we realized that that path, too, had a few pitfalls we didn’t want to cross.

Only one option left: I fired up the grill.

Grill? Who grills a turkey?

(Notice I didn’t say “Who barbecues a turkey?” We grill things in SC, we don’t BBQ them. BBQ is a noun, generally implying pulled pork. End of lesson for newcomers.)

Yep…it’s pretty much the only way to cook a big bird on Thanksgiving morning if you don’t already have the materials to deep fry it and your oven decides to take the day off.

So, I started the coals, set it up for indirect heat — with the coals off to either side — put the bird on and hoped we could get the bird done in time.

The quick end to this drawn-out story is simple: this was the single best-tasting bird we have ever cooked.

Ever since that frantic day a few years back, we grill our turkey every Thanksgiving, and while it is too late for this year, we recommend you consider it as well.

I’d also like to point out that grilling the bird is different from smoking it. Frankly, I am not a big fan of smoked turkey. I know that may ruffle some feathers, but I find the smoke taste overpowers the taste of the turkey, itself.

That is not to say that smoked turkey can’t be fantastic when used in the right way, but for something like Thanksgiving, I want that traditional taste of turkey. With a grilled bird, you get the best of both worlds: traditional flavors with the accent of wood cooking.

The process is simple enough: brine, prep, and grill are the basic steps.

While I could go into detail about the specifics of how to do each, this isn’t intended to be a cooking lesson. There are a number of other places that can do I much better job than I of explaining the details of each.

Really, this story is just intended as inspiration for your next holiday turkey. With an audience of people interested in BBQ, I am sure that more than one of you have at least heard of grilling a turkey, but for those of you new to the concept, consider putting your bird on the grill next time.

You won’t be disappointed.