Baseball brings BBQ into our lives. And, as usual, a baseball tournament gave us the opportunity to sample Moe’s Original BBQ on Pawleys Island.

I first noticed Moe’s on previous trips through the area. Recently, Lake High, president of the SC Barbeque Association, of which Heather and I are members, contacted me about Moe’s.

He told me one of his judges had eaten at Moe’s during a trip to the area. Actually, he was there to judge the very same competition we wrote about in our first experience at the novice table.

Anyway, the judge believed that Moe’s should be considered for the SCBA list of  “100 Mile BBQ,” barbecue so good it is worth driving 100 miles to enjoy. Lake wanted to know if I had tried it and what I thought of it.

I asked, “Do they cook with wood? I know that is a qualifying factor for 100 mile BBQ.”

It is a question, I still don’t have an answer for, actually, because it wasn’t obvious to us in the tasting. That said, according to their website, they smoke with fruit woods, which are more subtle in their flavor than oak or hickory.

Moe’s is a franchise that actually began in Colorado despite being the brainchild of “three Alabama boys” from Huntsville.  The Pawleys location is their only franchise in SC, at least at the time of this writing.

So how about our visit?

We entered the parking lot and it was not full, but certainly filled. The building is nice: new construction, white trim with light gray siding, a large, screened-in front porch area that wraps around the right, and to the right, a fun, outdoor area with picnic tables.

Heather noticed what looked like a Lowcountry Boil going on when we walked up from the left side where we parked, but I missed it.

We entered the front porch through the screen door. There are a number of tables on the porch for cooler days than it was today.  Then we stepped into the main restaurant.

The inside is comfortable and roomy for its size. The open kitchen is straight ahead. In front of that, the cash register is ahead and to the left, and a small bar area is ahead on the right. A large menu board hangs behind the register.

We stood back and examine the menu board, deciding what to have.

Heather and Camden both decided on the pulled pork sandwich. Heather added slaw and a squash casserole. Camden added baked beans and mac and cheese. I had the pulled pork platter with tomato cucumber salad and collards. It came additionally with cornbread and pickles and a small spoonful of slaw in the pork tray.

We had a seat at a high wooden table and awaited our order, which arrived promptly.

“The BBQ was pre-sauced a little bit. They put sauce on it, but it wasn’t soaked in sauce,” Heather said. This is good, for the record.

“The pulled pork was really clean. It wasn’t fatty or greasy or anything like that,” I responded. “I thought the texture was good. It certainly wasn’t overcooked.”

Heather agreed but found it lacking in one sense.

“Yep, I’d agree with that. It was more like roast pork. There was more smoke aroma coming into the building than coming from the plate,” I added.

This criticism is not meant to imply the pork was bad, at all. Indeed, the meat didn’t stand out as cooked over wood, but, again, the fruit woods can be very subtle, as mentioned above.

“The sauce was a heavy tomato sauce,” I said.

“I wouldn’t call it heavy…it was a vinegar tomato sauce, heavy on the tomato, but it wasn’t like a heavy, thick sauce,” Heather countered.

“It was definitely strong on the black pepper and vinegar. It was almost like a modified commercial barbecue sauce,” I thought.

Heather didn’t necessarily agree with that, but noted that  ‘it was enjoyable, but it was not a typical SC BBQ sauce.”

“Said on the website they were originally from Alabama,” I pointed out. “Thank God, it wasn’t a white sauce.”

“Yes, I was worried. I did not want mayonnaise for dinner….” Heather.

Neither of us is fans of the “White Sauce” found in Alabama.

White sauce is a mayonnaise-based sauce that, to me, is akin to a coleslaw dressing. I don’t think the “fattiness” you naturally get from pork is helped by adding another fat to the mix. That is why vinegar is the perfect complement to pork and why I tend to prefer vinegar-pepper sauces.

On to the sides… Heather had the best of the sides that day, we decided.

“The coleslaw was exceptional,” she noted “…like our own coleslaw. No mayo.  It was not cider vinegar, but white vinegar — with sugar. It was crisp fresh, sweet and tasted yummy. It had red cabbage and peppers sliced really thin.

“The squash was yummy too. It had a cheese topping — I’m not so into that. It reminded me of Momma Dee’s (my grandmother) it was definitely the same on the inside. The squash was old, overripe squash with thick skin and big seeds…but it was still good,” she finished.

I had the tomato-cucumber salad. The vegetables were cut into chunks.

“The basic taste I got out of that was saline, salted water. There was obviously the essence of tomato and cucumber in it, but…it was like possibly at one point there could have been a vinaigrette added, but it was washed out by the juices coming from the tomatoes and cucumbers. It was not vinegary. There was just saltiness.”

“It was like they stuck them in a brine,” Heather agreed.

“It was fine. I ate most all of it…I guess I ate all of it — that’s not surprising — but it certainly didn’t match the Po Pigs on Edisto version,” which was exceptional. Maybe my favorite side dish during our visit there.

“But that’s not surprising,” Heather pointed out. “We went there in the middle of the summer, and there were fresh vegetables right from the farms nearby.” Edisto has a rich farming tradition. (Note: Po Pigs is now closed.)

In addition, I had what I will almost always order if it is on the menu: collards.

“Collards were ok. That’s about it,” I said.

“The broth that they cooked it in was not heavily seasoned. It did not have a smokiness or anything like that, but they were fine and I ate them all” (again, not surprising).

Finally, my tray came with a slice of cornbread. It was rectangular and looked as if it might have been seared on one side before serving. Somehow, I doubt that is actually what they did, but it had that look to it.

“The cornbread was light,” I noted, “and it looked like, maybe, seared on one side. But not in butter…would have been good if they had seared it quickly in butter.”

“They should do that!” I exclaimed, savoring the possibility.  “It was moist inside. Light and airy. I enjoyed it.”

Finally, Camden’s take. Again, he had the pulled pork sandwich with baked beans and mac and cheese.

“It was a lot better than I thought it was going to be. The meat itself didn’t have much flavor to it. I’m glad they put the sauce on it. The sauce they put on it was pretty decent. The baked beans: way too much pepper and the mac and cheese was socially acceptable.”

“Socially acceptable what’s that?” we asked.

“You could serve it at a party ’cause it is not out of a box…and the water was good!” (He had just played two games of  baseball on a hot day.)

In the end, we felt that Moe’s Original serves a good product and one that most people will enjoy. The staff was both welcoming and friendly.

“It was good eats, but not exceptional,” Heather stated.

“It was good I thought, frankly,” I agreed.

“It was good. It was good eating BBQ. Perfectly acceptable, but it is not 100-mile BBQ,” Heather ended.

I had to agree. I would certainly be happy to enjoy a meal at Moe’s if we were on a SC BBQ Road Trip and in the area, but jumping in the car to drive 100 miles for it is a pretty tough standard to meet, and there is nothing wrong with falling just short.

UPDATE: Would like to congratulate the good folks at Moe’s Original Bar B Que. The powers that be at the SCBA have, in fact, designated Moe’s Original as 100 Mile Barbeque. You can read their review here. Well done. 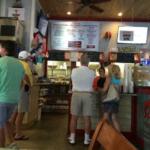 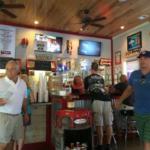 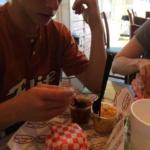 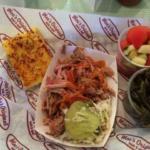 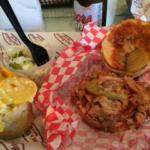 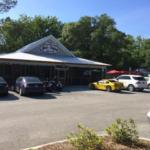 Opinions about BBQ are always subjective. You have to realize that this is not Carolina BBQ. I actually love this Alabama-style favor and their rotation of daily sizes is amazing.

This is a very accurate review of Moe's. It's just OK

Thanks, Ryan! We always hope to be fair and accurate in our reviews. We respect the fact that good people are working hard to deliver quality BBQ here in SC and while they can't all achieve "100 Mile" status, there is nothing wrong with simply making "good eats" that most everyone will be satisfied by.