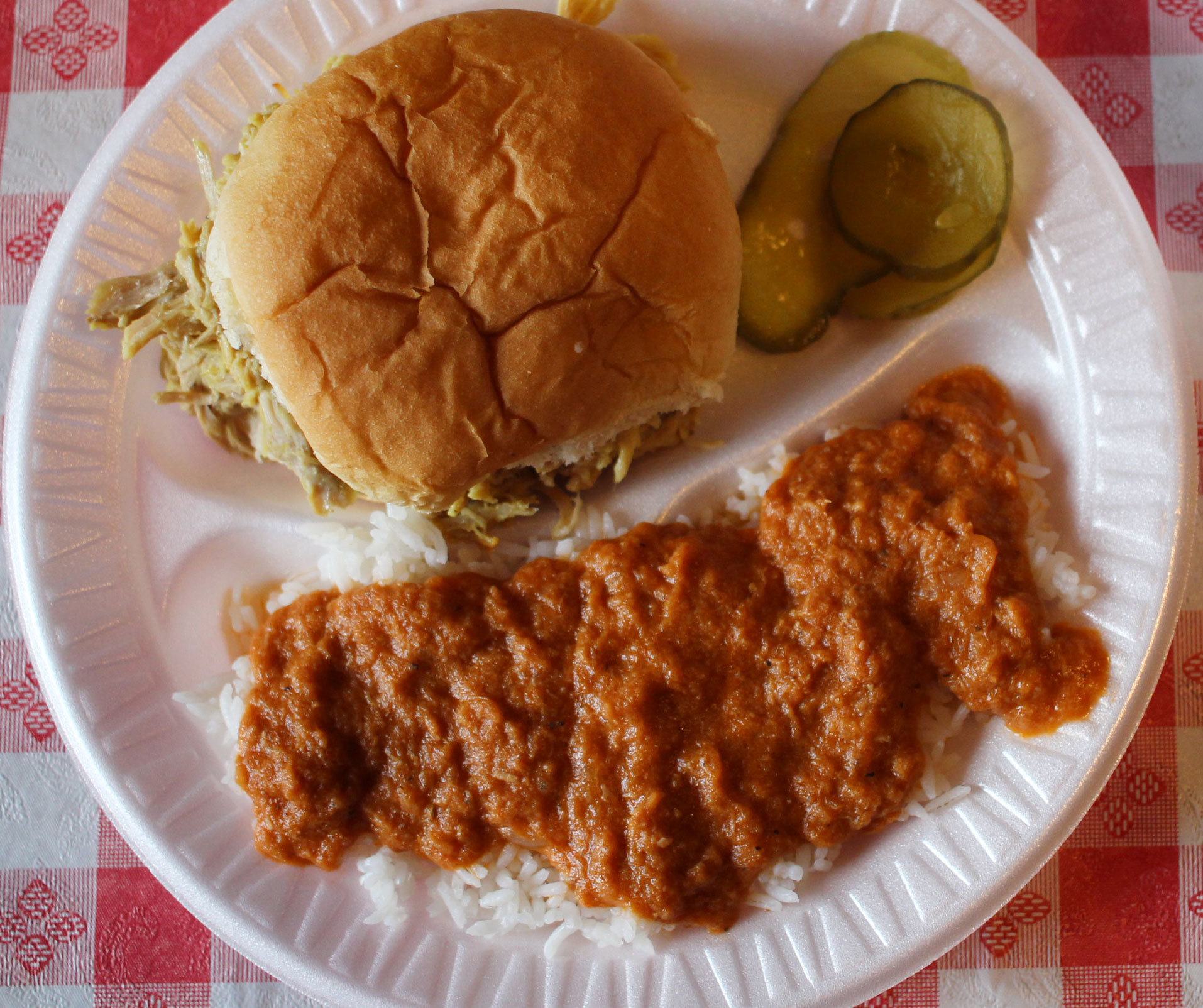 Like most South Carolina barbecue hash recipes, Sweatman’s BBQ hash recipe is a well-guarded secret. What’s no secret at all is just how delicious their hash recipe is.

In fact, eating Sweatman’s hash and rice made a Huffington Post list of top things to do in the US.

Specifically, they published an article telling folks of the “one thing” they must do in each of the 50 U.S. states. What was the one thing for a visitor to do in South Carolina?

No surprise when you read comments like this on the review sites. Kerry B, a (somewhat nearby) local from Goose Creek, said this about Sweatman’s BBQ hash recipe in her Yelp review:

“And oh, the hash!  This stuff is liquid gold.  Silky smooth, not a chunk of gristle to be found, unlike other hashes.

“Perfectly seasoned, a ratio of 3 parts hash to 1 part rice is about right.  I always get a gallon to go, and when I open my last pint from the freezer, I know a trip to Sweatman’s is called for.”

But just how is this amazing stuff made?

In an article with Orangeburg’s Times and Democrat, current owner Mark Behr explained how Sweatman’s BBQ makes the hash today:

Nowadays, Sweatman’s BBQ hash recipe “is all meat — Boston butts and fresh ham cut up. We take our chopped pork and dump it into a 70-gallon pot with onions and seasonings.  After it finishes cooking, we remove the meat from the pot and debone it. Then we grind it up like hamburger,” he said.

Next, the Behrs add a secret recipe of seasonings and sauces to the prepared meat and mix them together. “And that’s our hash,” he said.

In an interesting twist, Behr pointed out that the older hash recipe original owners Margie and Bub Sweatman used called for diced potatoes, but “the potatoes were more or less a filler” and the Behrs stopped using them. That said, even today, many South Carolina BBQ hash recipes still call for potatoes. For instance, this Dukes BBQ hash recipe includes potatoes.

So, it would take someone with a lot of experience to reproduce the flavors and textures the old-school Sweatman’s BBQ hash recipe that customers enjoyed for years. Fortunately, we know just the person.

“I grew up in Holly Hill,” writes W. David Griggs, “and I think I ate at Sweatman’s BBQ every weekend…except when they would close for a month during the summer so the family could go on vacation.

“Took me a dozen attempts and first-hand experience with a friend from Eutawville to come up with what I believe replicates Sweatman’s Hash.”

Still thinking about that hash and rice from Sweatman’s Bar-b-que. The whole hog sammie was pretty stellar too. Link to this week’s review in profile.

Thanks to Boots Varner

As he noted, Griggs did not begin this journey on his own. In fact, he had a bit of help along the way.

He tutored some under a local legend. Then he set out on his own to figure out how to make some of his childhood favorites.

An authentic SC BBQ hash recipe like Sweatman’s was a must. Fortunately, he would have some help.

“30 years ago, I was living in Eutawville, SC, when Boots Varner enlisted me to make the hash at his outdoor BBQ party. (Truly under his watchful eye. But now I find out his brother Roy taught him.)

“I continued to experiment on the hash recipe on my own (and with mustard sauce and slaw), trying to replicate the taste of Sweatman’s BBQ on which I grew up.

“I think I succeeded, and by chance, Foster’s Outdoor in California asked to publish my Sweatman’s BBQ Hash recipe along with the Sweatman’s style mustard sauce and slaw recipes I developed. That was over 20 years ago.”

Since then, Griggs has continued to refine his replica of Sweatman’s BBQ Hash Recipe, and it tastes as close to the real thing as you can get at home.

Enjoy and let us know what you think in the comments below:

We’ve published an in-depth look at SC BBQ hash. In this piece, we examine the origins and history of yet another SC BBQ original. In addition, you will find a current listing of every SCBBQ restaurant that serves hash.

In addition, check out these other authentic SCBBQ recipes we’ve published on destination-bbq: